SXSW 2013 Review: PLUS ONE Invites Sci-Fi to a College Party 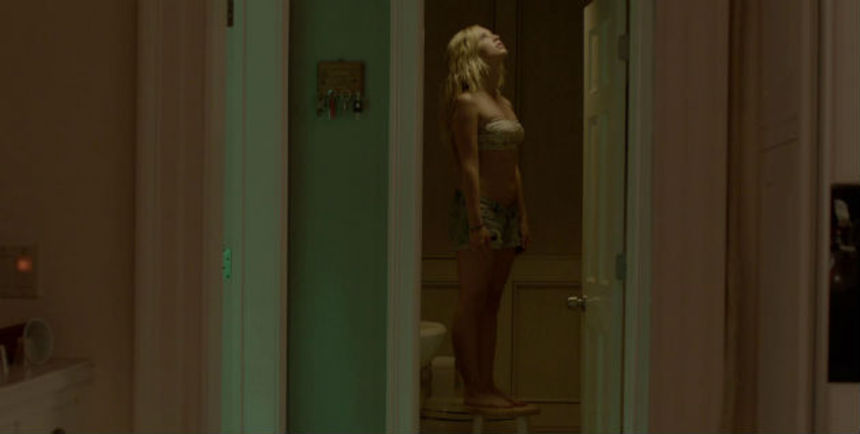 A high-level sci-fi concept, a raucous college party, and a desperate attempt at romantic reconciliation mix uneasily in Dennis Iliadis' Plus One, a movie whose worthy ambitions largely outstrip its execution.

Disguising the first act of the movie as a straightforward young-adult love story is a winsome idea. In practice, though, the resemblance in structure and characters to dozens of other similar tales does nothing to build anticipation for the inevitable twists, and the film struggles to maintain momentum. In short, we can't hardly wait for the sci-fi concept to take hold. When it does, however, the second act of the movie is then spent explaining and slowly exploring that; it's only in the third act that everything finally ramps up.

Ashley Hinshaw and Natalie Hall are persuasive as a wronged woman and a fantasy figure, respectively. Unfortunately, they are the mere objects of affection for the film's ostensible leads, Rhys Wakefield and Logan Miller, who are not able to rise above the limitations of their material. The screenplay by Bill Gullo, based on a story by Illiadis, spends far too much setting up first one and then another premise, and the characters flounder in a sea of cliches.

David (Wakefield) unaccountably kisses another woman in the sight of his girlfriend Jill (Hinshaw); she walks out on their relationship, leaving him to trail after her when they're both invited to a massive party. At the party, David's best friend Teddy (Miller), awkwardly hits on Melanie (Hall), a woman he doesn't know; she responds to his lame humor and decides to take him to bed, right then and there.

The sci-fi concept arrives via a small meteor that slams unnoticed into the ground near the party. Something within the meteor interacts with something else nearby, and then strange things begin happening at the party, leading eventually to utter chaos.

Teasing out exactly what is happening takes a while, as David and Teddy -- joined by the group's fifth wheel, a shy redhead played by Suzanne McCloskey -- stand around trying to suss out the situation. Then they stop and think about it, and discuss it, and then they stare some more and worry about what it all means. When they finally take action, the inner motivations of David, Teddy, and shy girl become apparent.

David is a morose sort of fellow, whose anguish at losing his girlfriend is palpable; his single-minded determination to win her back is understandable, yet it reinforces unflattering personality traits she identifies in a major argument. Rather than address those root concerns, he (essentially) tries to talk his way out of it.

In a similar manner, Teddy is focused entirely on having sex, and is blind to Melanie's other charms. When everything begins to go to hell, he remains completely self-involved, until the script needs him to expand his scope of concern. This is the same point at which a number of other characters are drawn more closely into the story, and it's far too late to view them as anything more than potential victims.

Iliadis displayed considerable skill as a filmmaker with the Last House on the Left remake, committing fully to the more odious aspects, while jerking the narrative forward in uncomfortably irregular spasms. In Plus One, he commits fully to presenting an adult-oriented college party movie, complete with strippers and other bared bodies, along with copious amounts of alcohol and foolish behavior. And when things go haywire, he commits fully to that as well, in explicit detail.

The relationship issue between David and Jill, though obviously coming from a sincere place of regret and recrimination, is too one-sided in favor of the wrong-headed character, as if the audience were meant to, not only identify with, but applaud his mystifying decisions.

It's a odd way to resolve the issue, and is symptomatic of how other plot threads are sown up. Ambiguity can be a very good thing, but the indecisiveness in Plus One strains credulity and spoils what could have been a very good party.

The film had its world premiere at SXSW on Sunday night. It screens again tonight (Monday, March 11), and on Thursday, March 14.