Review: THE SPINE OF NIGHT Will Knock Your Block Off 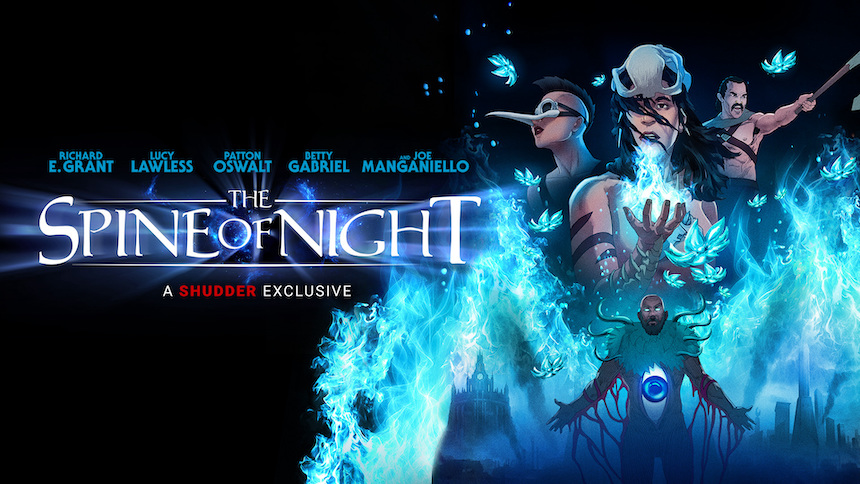 We live in a heyday of adult animation on television, but when it comes to feature length films, it's been a bit more sparse over the last couple of decades.

Apart from brutally raunchy fare like the South Park film and Sausage Fest, serious adult animation has been largely in hibernation since the days of Bakshi, which is where Philip Gelatt and Morgan Galen King's The Spine of Night picks up the long dropped baton and runs with it. Heavily influenced by fantasy films of the late '70s and early '80s, The Spine of Night gives geeks everywhere a gory gift for which we can all be thankful.

Tzod (Lucy Lawless, Xena: Warrior Princess, Ash Vs. The Evil Dead) crawls across an alien plain to a the cave of The Guardian (Richard E. Grant, Withnail & I) in an effort to protect the bloom, a divine flower possessing untold and unrivaled powers. When she arrives, she begins to recount her history with the bloom, and the film floats off into further histories beyond hers, recounting the bloom's history and the way in which it has been manipulated to control everyone around it through fear and intimidation.

As we pass through these histories with Tzod and the Guardian, we are introduced to various major and minor players in the bloom's tale, each shedding a sliver of light onto its importance and crucial place in the cosmos. Through generations and aeons, the stories of the bloom are filled with blood and plunder; battles for supremacy and against ignorance, and always at the expense of the peons who stand in the way of the autocracy.

There's honestly not a lot to say about the “what” of The Spine of Night, it's a fantasy film whose plot in pedestrian terms is as convoluted an nonsensical as any other film of its ilk, the real magic is in the “how”. Gelatt & King resurrect the old school rotoscope style of animation favored by filmmakers of the early '80s to accomplish a very retro look and marry it with more modern sensibilities and expectations of what fantasy can be. Drawing heavily from the seminal work done in films like Heavy Metal and Bakshi's Tolkein films, The Spine of Night is effectively an homage to a style long abandoned by traditional animation.

With a cast heavily populated by Hollywood's geek-elite, The Spine of Night derives much cred from participation from heavy hitters like industry D & D evangelist, Joe Mangienello (True Blood, Archenemy), film fanatic Patton Oswalt (Ratatouille), and Betty Gabriel (Get Out). However, it's the absurd violence that really puts this one over the top for genre film fans. Imagine the old Dragon's Lair arcade game (laserdisc arcade games? What a concept!) packed with Metalocalypse levels of violence and gore, and you'll have some idea of what you're in for. It's a glorious bloody mess of hacked-off limbs and decapitations by which it's hard not to be impressed.

Because The Spine of Night is so deliberately derivative of so many classic forms, it's hard to call it anything but a loving tribute. However, it does what it does with such effectiveness, always raising the ante of the violence and gore, that it succeeds in providing a new standard for adult fantasy animation that will be hard to surpass. It's not pathbreaking, but it is damned entertaining, and if you're already a fan of fantasy films in any form, you owe it to yourself to give this one a spin, it'll knock your block off!

Review originally published during SXSW in March 2021. The film is now streaming on Shudder US, Shudder CA, Shudder UKI and Shudder ANZ.

Do you feel this content is inappropriate or infringes upon your rights? Click here to report it, or see our DMCA policy.
Lucy LawlessMorgan Galen KingPatton OswaltPhilip GelattRichard E. GrantShudderUS