After a wee bit of a dry spell, it has been a good week for poster designs released online. There was the "Lone Wolf & Pug" key art from the Fantasia Film Festival, as well as Zhang Yimou's 1930s set spy film, Cliff Walkers.

As a sucker for unusually placed credit blocks, however, my heart lies with the recent one-sheet for the commercial release of Pablo Larraín's (Tony Manero, The Club) latest film, Ema.

Using micro text in a skinny vertical block to divide the light and dark halves of lead actress Mariana Di Girolamo's face, and placing the film's title, above-the-line credits, tagline, and festival logos on the dark side, in hot pink to match the overall lighting on the face is profoundly satisfying, visually. Even the sweep of her hair pushes the eye over to the relevant information.

Of course, this offers little of the film's story, or setting, but it does yield a confrontational tone (nearly any time the subject looks out from the poster in such a way) and sense of style. If you have caught any of the Chilean director's previous work, even his American studio produced biopic, Jackie, this should, perhaps, already be clear.

This design was done by Time Tomorrow, who did that fiery mane key art for Saint Maud, and some of the latest 007, No Time To Die, marketing materials. It is also worth noting the series of festival posters done by designer Dan Petris, which are all excellent. 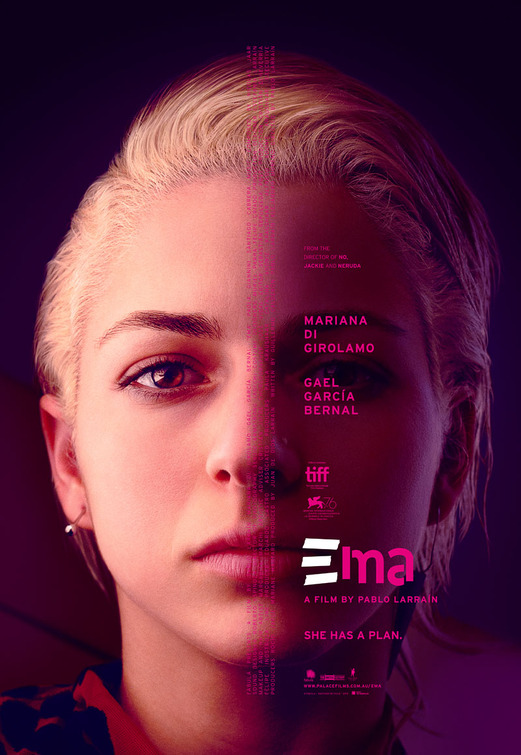 Do you feel this content is inappropriate or infringes upon your rights? Click here to report it, or see our DMCA policy.
ChileCredit BlockEmaGael García BernalKey ArtMariana Di GirólamoPablo LarraínPoster