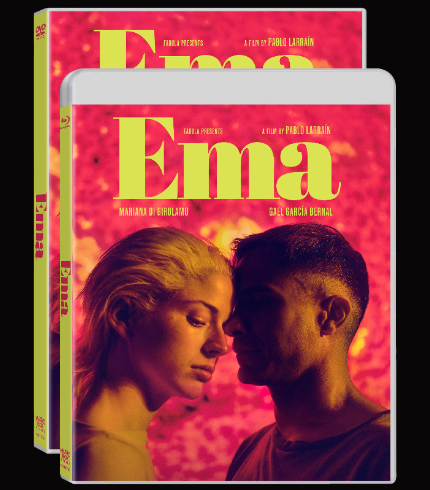 Ema
Now available on DVD and Blu-ray from Music Box Films. The film arrives exclusively on Showtime on January 15.

"A new breed of filmmaking from one of the most talented filmmakers working today that highlights the arrival of the new generation, which is more empowered and care-free, as if saying 'whether you like it or not, the future is ours.' I tend to agree."

So wrote our lead critic Dustin Chang in his review, and I tend to agree with him. Directed by Pablo Larraín in 2019, after Jackie and before Lisey's Story and Spencer, the film "didn't really have a script before starting," Larraín notes in an interview conducted by David Barker that is featured in the invaluable booklet that is included with the Blu-ray. "We had an outline and wrote everything as we filmed it. That creates a different type of energy for everyone involved."

The booklet also includes an incisive essay by Carlos Aguilar that goes deep on the film and its place in Larraín's filmography. The Blu-ray features a terrific transfer of the widescreen 2.39 original, Spanish 7.1 DTS-HD master audio, green and red band transfers and a photo gallery of stills from the film.

It also includes a select scene audio commentary, running some 31 minutes, by choreographer Jose Vidal, in which he explains some of his background, how he came to work on the film, the locations of some of the scenes and how that affected the manner in which they were shot, and why he thinks director Pablo Larraín wanted to work with him. (This special feature is best watched after viewing the film itself.)

Ema fairly explodes off the screen, even watching at home. It's like an inferno of flame that can only be tamped down from time to time before reigniting into flames.