Frequenters of all things fantastic do well to put Slash on their radar. Austria’s premiere genre festival has, over the course of eight years, succeeded in building a loving home for the weird, wild and wonderful.

Housed in Vienna’s Filmcasino, a fifties-styled movie theatre where any cinephile or movie nut is sure to leave a piece of his or her heart, Slash’s 2017 edition treats patrons to a cornucopia of greatness from all corners of the world. Audiences come in droves, inspired events tie the community together and before every screening there’s a palpable energy of excitement as well as an eager sense of discovery in the air. Plus, when a friendly reminder in the movie theater warns fans not to reserve seats by leaving their jacket behind lest it be sacrificed to Cthulhu you know they’ve got a very good thing going indeed. Travel with us for a moment and read a report on some films ScreenAnarchy was able to catch while in Vienna. 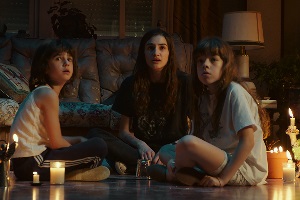 Kicking off the first Saturday evening was Verónica. Paco Plaza’s latest follows the misadventures of Vero, a teenager who tries to contact her deceased father by way of an Ouija board, during an eclipse no less – a double horror faux pas if ever there was one. Throw in a blind, sinister-looking nun who seems to spend most of her time chain-smoking in a rundown basement and warns of the Evil (!) that now stalks Vero, and you’ll be forgiven if you want to pass right off the bat. Think twice, though. If Verónica is by the numbers, it’s by the numbers done right, as an incredibly assured, tonally consistent homage to horror films of the eighties and nineties.

The films is also not without surprises. For every reference that links an eclipse to something ominous, Plaza finds a nifty match cut to enliven things visually and turn sun, moon and stars into an overarching motif that gains power through repetition. Likewise, while a soundscape comprised of organ, whistling and retro synth fondly recalls classics and establishes old school charm, it is Centella that becomes the film’s secret weapon. A washing powder commercial is yet to pack a more brilliant punch than it does in Verónica. The jingle, sung by Vero and her siblings, is catchy, comical and affecting all at once during a climax that doesn’t disappoint provided you don’t expect the cut-throat intensity of Rec. The talented young folk who carry the film deserve special mention. (For an alternate and more in-depth take on the film check out Shelagh Rowan-Leg’s full review.) 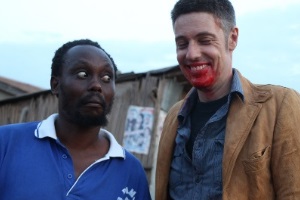 The fun showed no signs of dying down when Alan Hofmanis popped up around midnight to bring Wakaliwood to Vienna in the form of Bad Black and Who Killed Captain Alex. The double dose from East-African director Nabwana Isaac Godfrey Geoffre was a breath of fresh air around midnight. Made with next to no money, Bad Black is a Ugandan action movie that exists as an act of sheer will. Look past the constraints and you’ll see a director who has ingested many a film and who, with no formal training, has cultivated a keen eye for choreography. As an added bonus: Nabwana packs no shortage of idiosyncrasies.

The Video Jockey’s voiceover (that plays alongside the film’s dialogue and comments on the action as it unfolds on the screen) is not unlike an MC freestyling over a beat and firmly roots Bad Black in the oral traditions that typify African culture. Without turning a blind eye to the plight of Uganda’s slums and its inhabitants (far from it), Nabwana’s film forgoes the often sappy manipulations of social realism (a lens through which the West loves to capture Africa), offering instead spikes of humor that are as intentional as they are good-natured. Bad Black is way over-the-top and the best kind of crazy; a form of versioning that riffs on products of Western culture to tell its own tale which, much like Swaaz, Ugandan Schwarzenegger, becomes fiercely unlike any other. More of this African cinema coming to the West? Dr. Ssali (Hofmanis himself, sampled into the Wakaliwood world) will help provide the cure. (For more on Bad Black, Shelagh Rowan-Leg has you covered once more. Click here for the full review.) 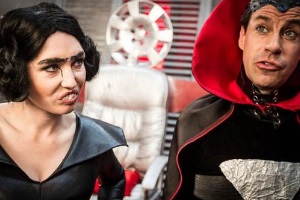 Post-midnight fatigue set in and little sleep quickly gave way to Sunday afternoon, which is when scrappy indies made on a shoestring budget continued to reign supreme. This Giant Papier-Mâché Boulder Is Actually Really Heavy was first at bat. Christian Nicolson’s film came out swinging and landed more than one hit but ultimately overstayed its welcome. The story is centered on three guys who are sucked into a cheesy sci-fi movie. At risk of never being able to leave and becoming characters of this goofball world, they must do battle with evil space dictator Lord Froth (Joseph Wycoff, pictured on the left) to escape their lowbudget trappings.

The actors acquit themselves well on a quest that sees them hopping from one zany planet to the next. Love of practical effects is married with ‘special’ ones that stand out for their charming chintziness in a film that takes its economic straits in stride to realize a lowbrow aesthetic of a bygone era. Standout humorous bits include a Benny Hill-like riff that sees Neanderthal people being chased by a giant lizard but the film often feels too random. An improvisational approach to storytelling and lack of thematic ambition make This Giant Papier-Mâché Boulder feel like sketch comedy that (much like the long title) goes on interminably. By the time the end credits roll it felt like something an episode of Community could have pulled off with much more wit sprinkled into the proceedings. 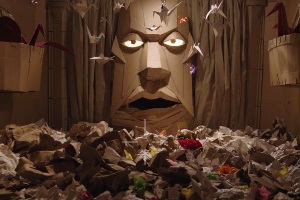 Fairing much better, first and foremost because of its sense of pacing, was Bill Watterson’s Dave Made a Maze. Throughout the first weekend in Vienna, no other film got the crowd going like this and it’s easy to understand why. Cobbled together with loads of cardboard and a can-do spirit, Watterson’s debut centers on a protagonist who can’t seem to commit and never sees anything through till the end. Dave drops the ball, though. His apartment becomes home to a labyrinth he builds and which is “much bigger on the inside”. He entraps himself in gorgeous sets laced with deadly booby traps and will need a helping hand or two from his friends if he ever hopes to carry on with life.

Underneath the dazzling surface a strong psychological dimension is at play. This indie winner pairs innovative art design with an evocative soundscape to become way bigger than the sum of its parts. Dave may have made his maze but Watterson, in crafting a rollicking adventure that doubles as a meditation on the creative process, emerges as the real talent to watch. (For a deeper dive into Slamdance sensation Dave Made a Maze, please read Loïc Valceschini’s review.)

It would be an injustice not to give a shout-out to an event screening of William Castle's campy cult hit,The Tingler, which descended on the Filmcasino ‘In Percepto’. What that means is the audience was treated to a very interactive showing that let the titular Tingler loose among the rows. Buzzers under the seat cushions, a staged fainting and plenty of top-of-the-lungs screams cumulated into a cathartic experience.

Another weekend highlight included a zombie walk through Vienna that lead the Undead to shuffle back into the Filmcasino where they were welcomed by the rocking tunes of the Bloodsucking Zombies from Outer Space. Now that is how you set up a screening, even if the actual zombie flick – It Stains the Sands Red – ended up being pretty run-of-the-mill with implausibility in spades. Far be it from a criticism, however. Instead it's a sign of how alive and kicking Slash is, able to uplift the weakest films in its program with the support of the community and strength of its inspired side events.

Take in some of the fest's atmosphere with a selection of choice shots in the gallery below (all of them taken by photographer Mercan Sümbültepe (©)). 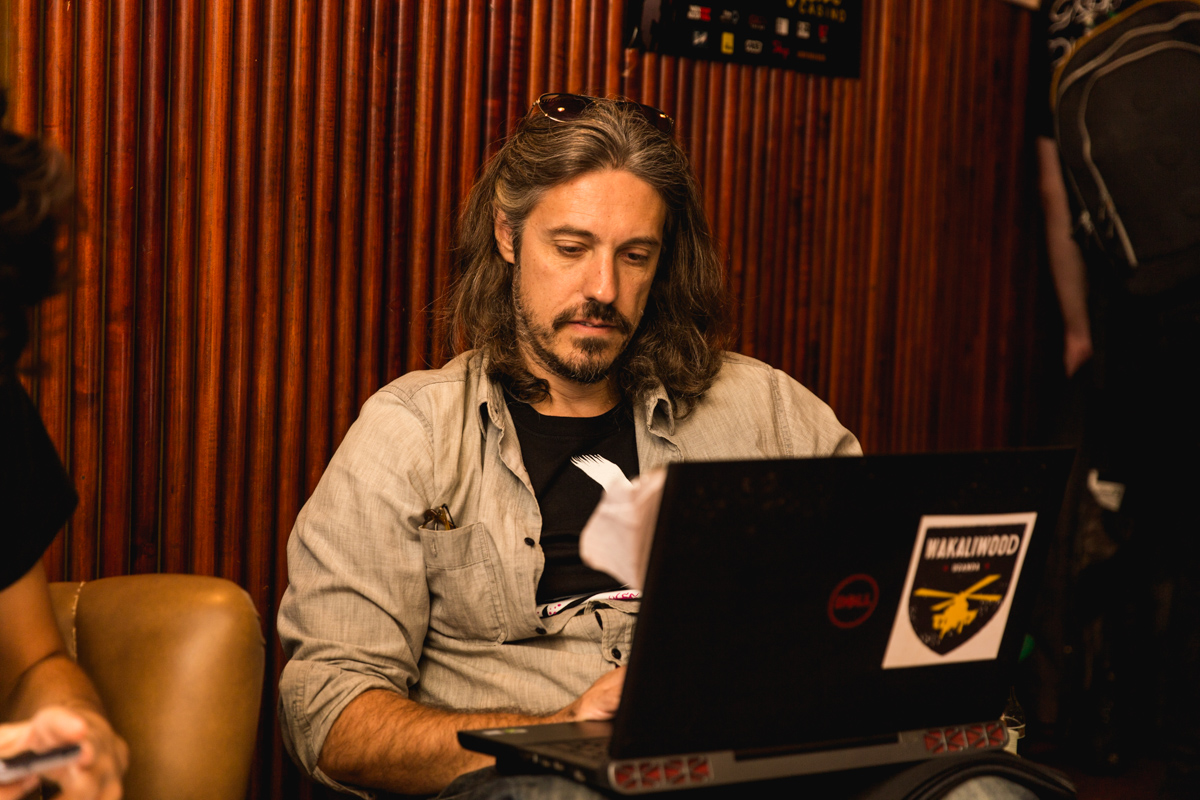 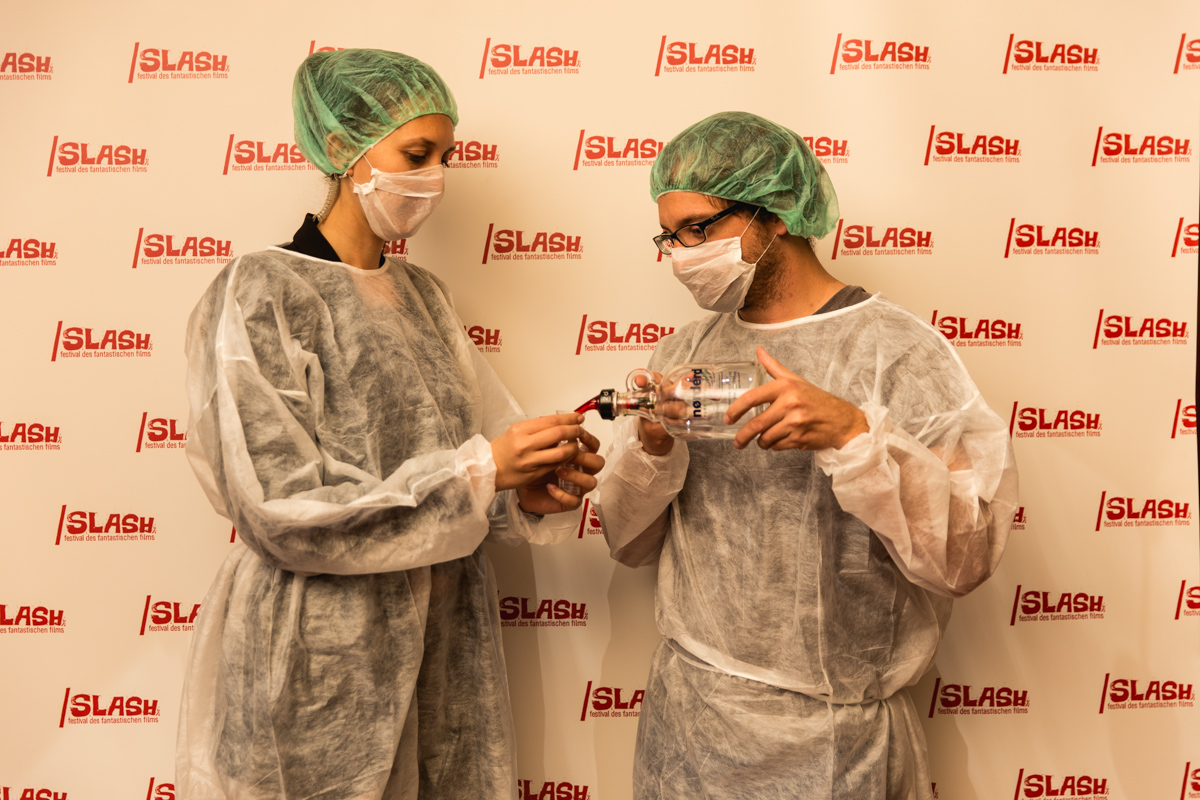 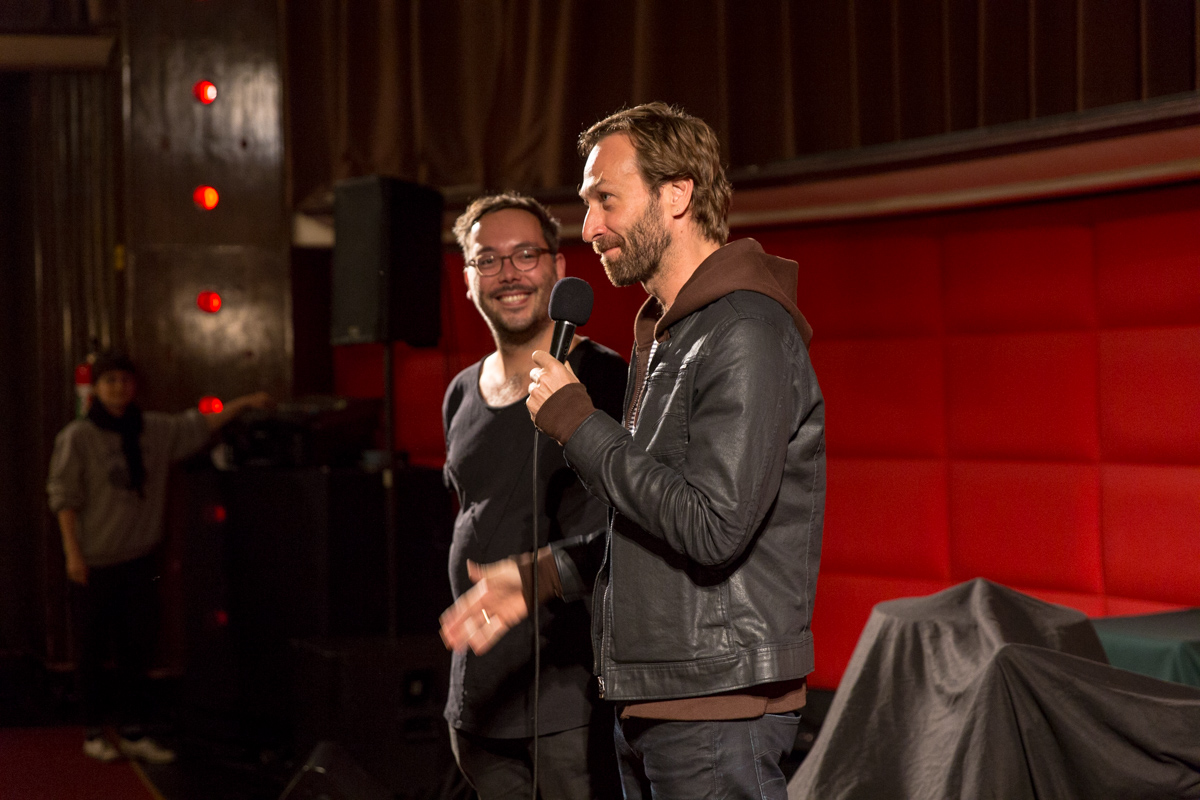 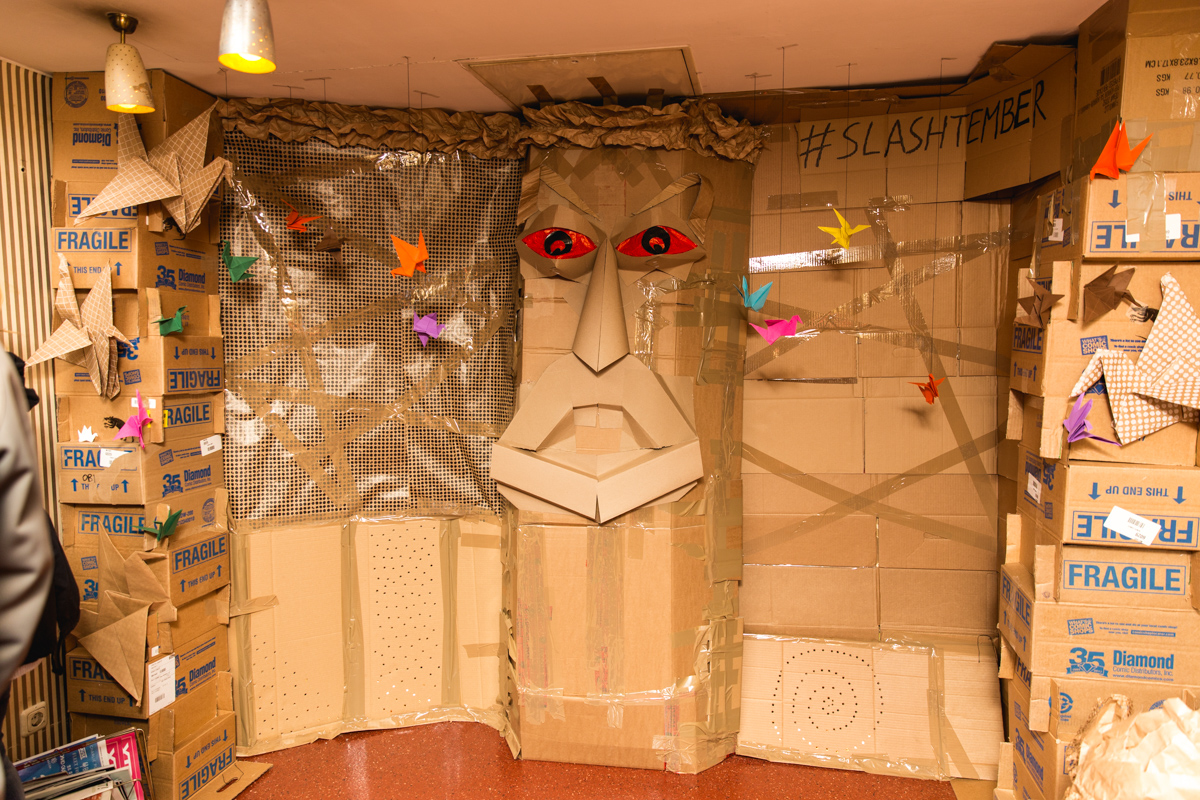 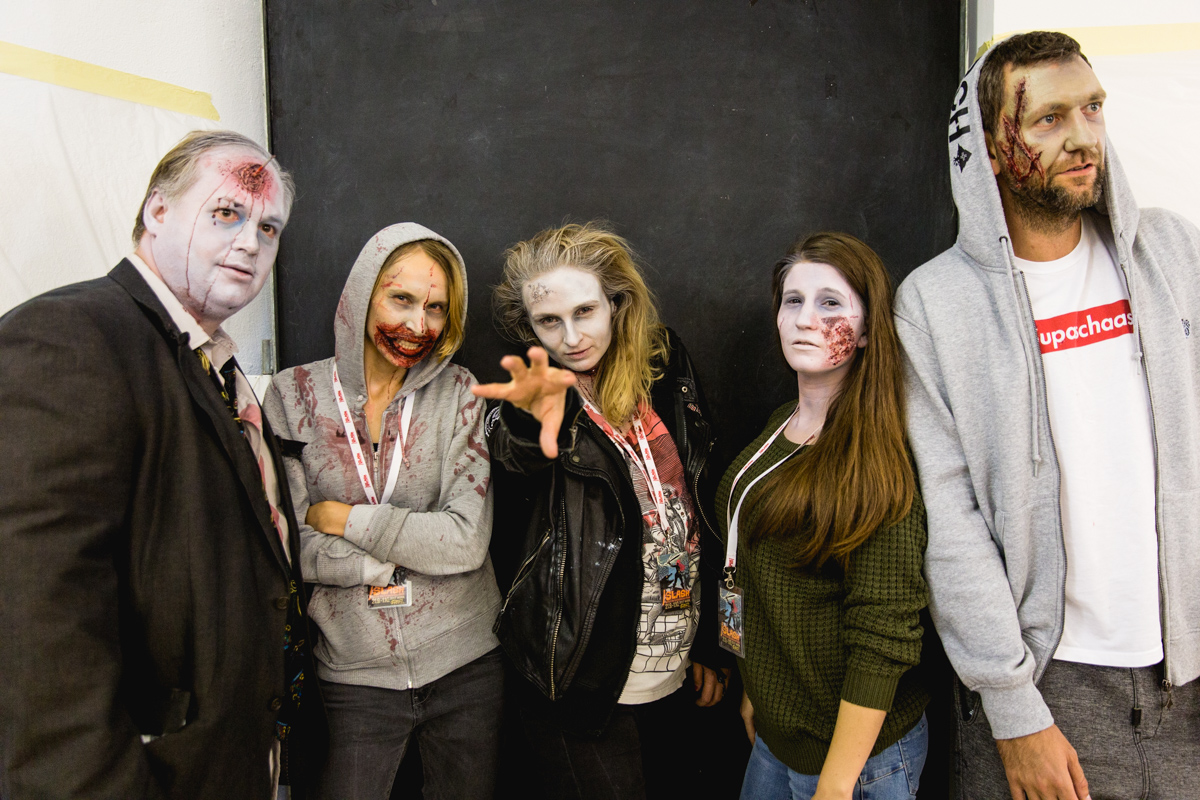 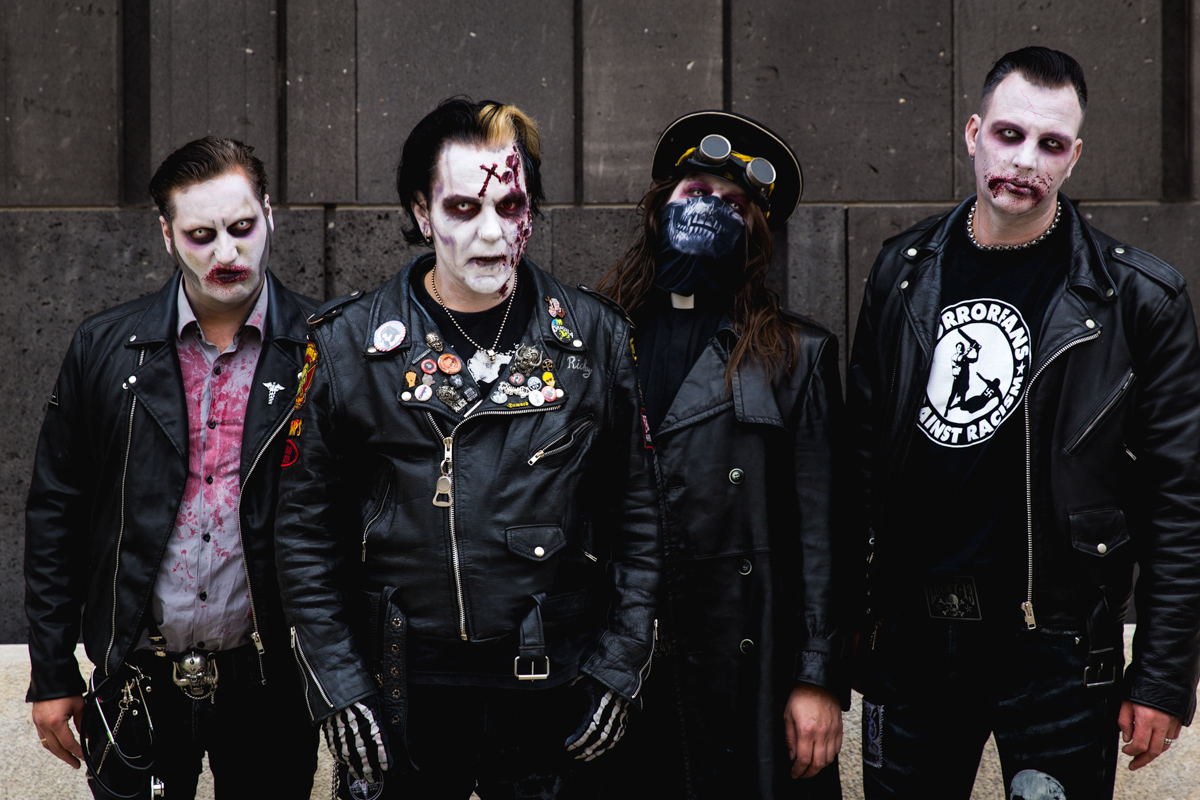 Do you feel this content is inappropriate or infringes upon your rights? Click here to report it, or see our DMCA policy.
Alan HofmanisBad BlackBill WattersonChristian NicolsonDave Made a MazePaco PlazaThis Giant Papier-Mâché Boulder Is Actually Really HeavyVerónicaWho Killed Captain Alex