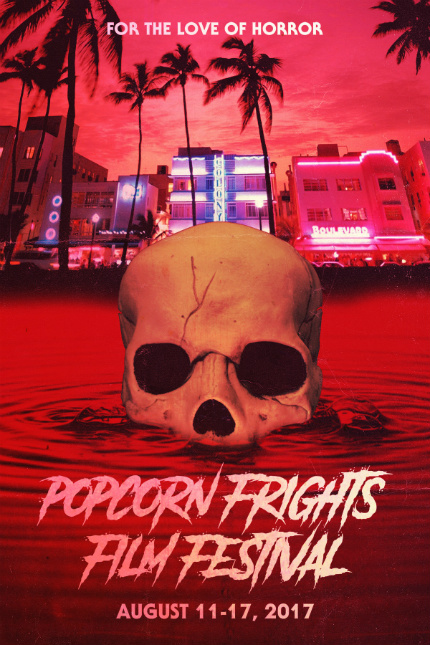 The 3rd annual Popcorn Frights Film Festival has announced its first wave of programming, and Miami, Florida is set to have its spine tingled in August!

Billing itself as the largest genre film event in the state, the festival will be held from August 11-17 at the O Cinema Wynwood theater in Miami. I have been to Florida in August, and trust me, inside a nicely air-conditioned movie theater is definitely where you want to be. The program that's been assembled so far sounds very enticing.

Here's the first wave of the program, with more bloody thrills to come. Check out two brief teasers for the fest below (very NSFW). All descriptions are also via the festival.

FINAL CUT US PREMIERE. Alcoholic werewolf cop Lou Garou springs into action when an eccentric businessman with evil intentions seduces his town's residents with a new brewery in this outrageous horror-comedy sequel.

FLORIDA PREMIERE. On a quiet suburban street tucked within a 'safe neighborhood', a babysitter (played by The Visit star Olivia DeJonge) must defend a twelve-year-old boy from strangers breaking into the house, only to discover that this is far from a normal home invasion.

SOUTH FLORIDA PREMIERE. Driven by an inner need, frustrated artist Dave begins building a fort in his living room. But as he completes construction, Dave becomes trapped inside by the dangerous creatures he's designed, forcing his girlfriend to mount a rescue mission.

FLORIDA PREMIERE. When seven suburban millennials play the "Game of Death," they soon get caught up in its high stakes, which are literally life or death. Confronted with a grim choice-kill or be killed - the friends gruesomely realize that none of them are safe.

FLORIDA PREMIERE. In the throes of a zombie apocalypse, a troubled woman from Las Vegas with a dark past finds herself stranded in the desert with a lone and ravenous zombie on her tail.

FLORIDA PREMIERE. What happens when people lose all their inhibitions? This blood-soaked gonzo thriller offers a glimpse as a virus that erases impulse control breaks out at a law office, where a disgruntled employee and a dissatisfied client go looking for some justice.

FLORIDA PREMIERE. When an unidentified madman is sent to the electric chair, it triggers a sort of Mischief Night for a group of serial killers out in an entire city. An escaped mental patient, a beautiful seductress, a strangler who preys on unsuspecting women, and an enigmatic masked contract killer run amok in Mickey Keating's new slasherfest.

FLORIDA PREMIERE. When Mary loses one of her twins during childbirth she feels a devastating loss that spirals her into madness. She begins to suspect a sinister force is after her surviving child that will stop at nothing to take it from her.

FLORIDA PREMIERE. Budding social-media stars Sadie and McKayla are desperate for greater fame. But big ambitions require big plans, and the two think they've hit on a good one: force a serial killer to tutor them in his craft so they can become horror legends.

FLORIDA PREMIERE. Acclaimed filmmaker Rodney Ascher (Room 237, The Nightmare) has created a singular hybrid of documentary and horror that explores how pop culture can scar you for life.

MIAMI PREMIERE. Jane is out to get a buzzcut and ends up dealing with apocalyptic matters of a special kind while trying to fix the haircut her barber botched so that she can get laid before she dies.

IT BEGAN WITHOUT WARNING
Directed by Jessica Curtright & Santiago C. Tapia
US | 6 minutes | 2017

FLORIDA PREMIERE. As a catastrophic epidemic devastates the world, a survivor fights to save his daughter from the mysterious virus that has already consumed his wife.

Festival Premiere Badges are on sale for a limited time for $120 per person and $180 for couples.