In Paco Plaza's latest feature film, we know something awful will take place. 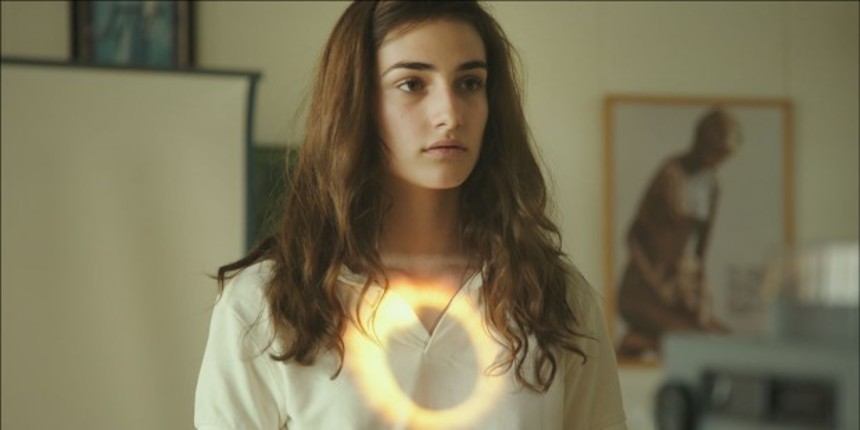 Teenage girls have always been ripe fodder for horror filmmakers. Either as monsters or victims (or both), the body changes (not to mention the change in treatment by other people, especially men) and vulnerability of girs at this age can make for some interesting metaphors of terror. In Paco Plaza's latest feature film Verónica, he shines the light on one such girl whose dabbling in mischief goes horribly wrong.

Verónica (or Vero, ably potrayed by newcomer Sandra Escacena), has a bit more on her plate than the average teenage girl: with her mother (Ana Torrent) constantly working, Vero is left in charge of her younger sisters and brother, feeding them, getting them dressed and to school in the morning, and babysitting most nights. On top of this she must deal with the usual trappings of adolescence. For some relief from the daily pressures of her life, she and her friend Rosa buy a ouija board from a local vendor, and decide to try and speak to the spirit of Vero's deceased father. But something goes wrong, and a (not so) ghostly figure follows Vero back to her home, terrifying her to the point of madness.

Inspired by the notes of a Madrid police detective of a case of possible demonic possession in 1991, the film opens with the detective and other police officers arriving on the scene, giving a not-so-subtle hint of the terror and destruction to come. We are then taken back three days to learn what horrible thing so terrified the detective. The film then moves us to Vero and her home life, giving a kind of social realism base; then it moves back to horror when Vero and her friends first use the ouija board, and we can figure out where things are going from there.

And while there are very scary moments in the film (the monster itself is both realistic and frightening to the core, and its has some well-earned jump scares), there is little that is new or inventive about the story. The shifts in tone - at one moment a social drama, the next a haunted house film, the next almost trying to invoke 70s horror with the score - are never cohesive, and seem more like indecisions on how to present Vero's story.

The family relationship is a stand-out of the film; the connection between Vero and her younger siblings (wonderfully portrayed by Bruna González, Claudia Placer, and Iván Chavero) is wonderful to watch, even as Vero's behaviour become violent). Escacena is completely believable as a teenager who is only partially aware of what she is becoming, and more than a little relctant to endure even more than she already does. And what the story lacks in a cohesive tone, it makes up for in excellent production design (making us aware that it's 1991 without it being too nostalgic), and a haunting score.

But given that we know, from the opening scene, that something awful will take place near the end, the various twists and turns the story takes are still not anything we haven't seen before (girl plays with ouija board, bad things then start to haunt her), and waiting to see if the climax will fulfil the time we've spent provokes impatience. While many of the parts work well on their own, they are not tied together strongly enough for a powerful enough film.

Do you feel this content is inappropriate or infringes upon your rights? Click here to report it, or see our DMCA policy.
Ana TorrentPaco PlazaSandra EscacenaTIFF 2017Verónica