Gallery: Behind The Scenes of Cult Fave DAVE MADE A MAZE, In Japanese Cinemas This Friday

On the tail of a successful festival run, US home video release, and an upcoming home video release through Arrow Films in the UK, director Bill Watterson's incredible cult oddity Dave Made a Maze has scored a theatrical release in Japan beginning this Friday, October 19th.

When Dave (Nick Thune), a bored homebody who decided to build a complex maze out of cardboard boxes in his living room gets lost, it's up to his girlfriend, Annie (Meera Rohit Kumbhani) and their friends to save him from his own insane/ingenious creation. Dave Made a Maze is a marvel not only of pure creative spirit, but also a hugely impressive feat of art direction and production design.

Building a complex labyrinth out of cardboard boxes and other easily accessible items from around the house is no easy feat, and the makers of the film have happily shared some of their planning materials with us to give Screen Anarchy readers a look behind the scenes of this amazingly fun "little" movie with a huge heart.

The director sent us some fascinating production notes (beware, spoilers ahead, but if you're in the US, the film is streaming on Hulu as we speak) and images and we've gathered some of the most interesting parts into a neat gallery below, so be sure to click through all of the pages for some fun images and details. The first slide is a video made to announce the Japanese release featuring Bill Watterson and one of the stars of the film. Enjoy!

(all text in the gallery below by director, Bill Watterson) 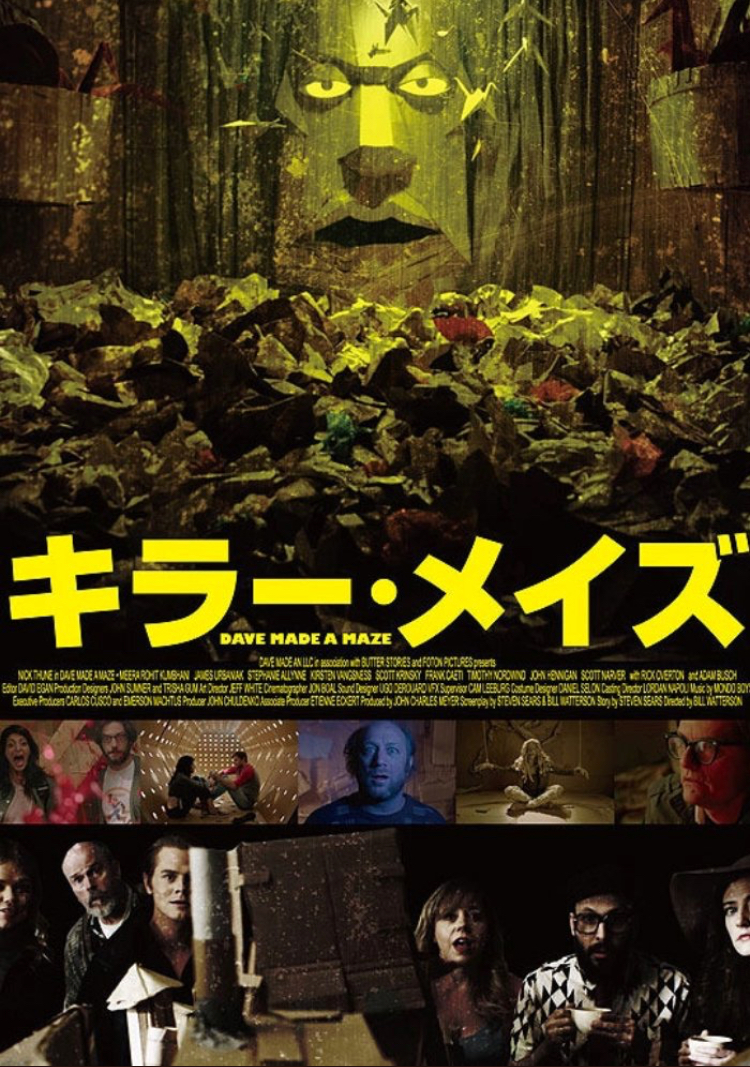 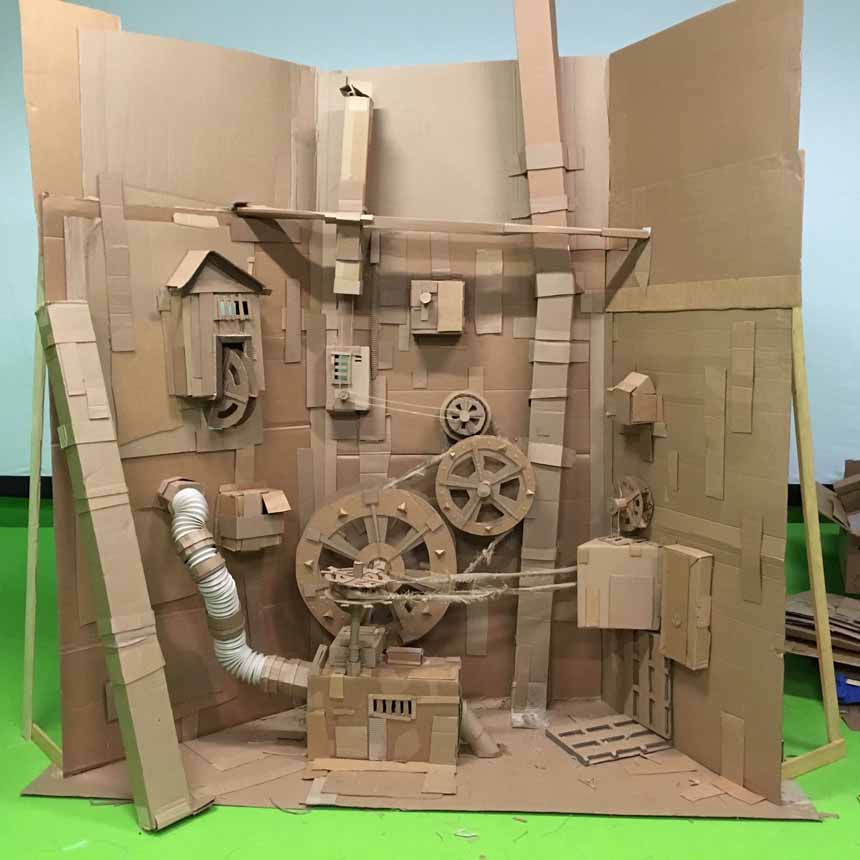 You’ve got a practical effects-driven, adventure-horror-comedy feature film that takes place almost entirely within a fantasy world. You have no time, no money, and no space. A bit of advice, from someone who’s been there? Walk away.

But if you just can’t, then assemble a team of gifted artists who feel the same way, stay flexible, defer to the best idea, and hold on tight; it’s going to be a lot of things, but easy will not be one of them. We had about a month of pre-production for ‘Dave Made A Maze,’ using a now defunct green screen space in North Hollywood to begin our build. Some key pieces like the origami Head, the Minotaur Mask, the Giant Piano Keys, the Buzz Saws, and the four walls of the apartment set came together at that time. We didn’t have enough storage either at the build space OR the shoot space to have any of The Maze sets fully constructed. We tested a few practical FX gags, held our production meetings, and continued to amass cast and crew, while pouring through the script to finalize as many visual elements as we could. Our rates were terrible and our goals wildly ambitious, but people kept coming on board, many of them responding to the film’s metaphors for the pitfalls inherent in living a creative life. “So…you wrote a movie about me?” was something we heard again and again during initial meetings. That, or
“This is batshit insane! I’m in.” We were also lucky enough to have a member of The Cardboard Institute of Technology (look it up if you don’t believe me) come down from San Francisco to play in our sandbox—our Lead Sculptor, Mike Murnane, whose vision informed a lot of our aesthetic. 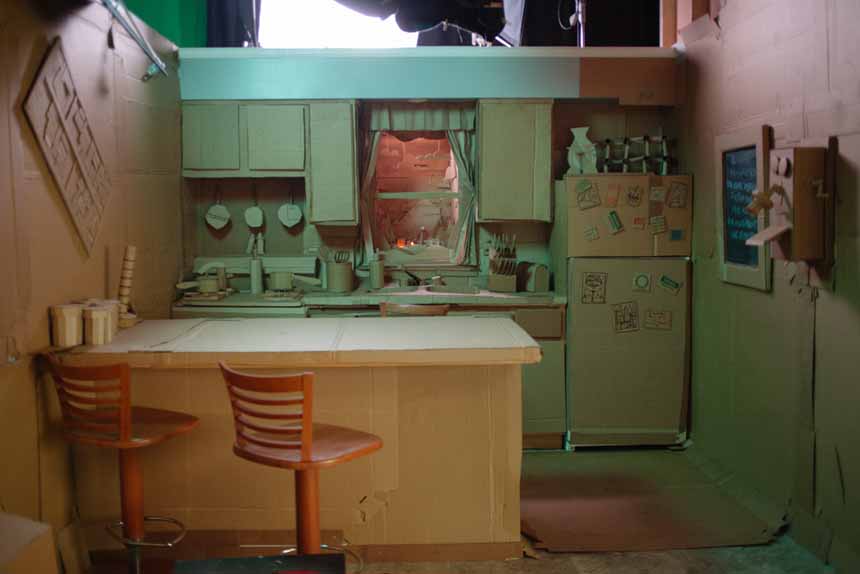 We found a stage in an industrial part of Glendale, CA that met enough of our specifications, with affordability topping the list. It didn’t hurt that there was a brewery within walking distance. We had 20 days of principal photography with full cast and crew, with what’s called a ‘hard out’ at the end of those 20 days: another client was coming in, and the space had to be cleared completely, whether we’d gotten our movie in the can or not. The shooting space was a single room that was only 68 feet by 45 feet, with an 18-foot ceiling. We built The Apartment first, and
that was all we could fit: the rest of the space was for staging gear. We started by shooting the very beginning and very end of the film. As soon as certain portions of The Apartment were wrapped, they began getting Maze-i-fied. The Bedroom became The Mini-Maze Within The Maze; The Kitchen gradually transformed into The Maze version of The Kitchen from the emotional climax of the film; the living room became the hall with the spike bed where the bass player from OKGo met his end, which then became The Origami Pit, which then became the Swamp that
contained Paper Brynn; and so on. 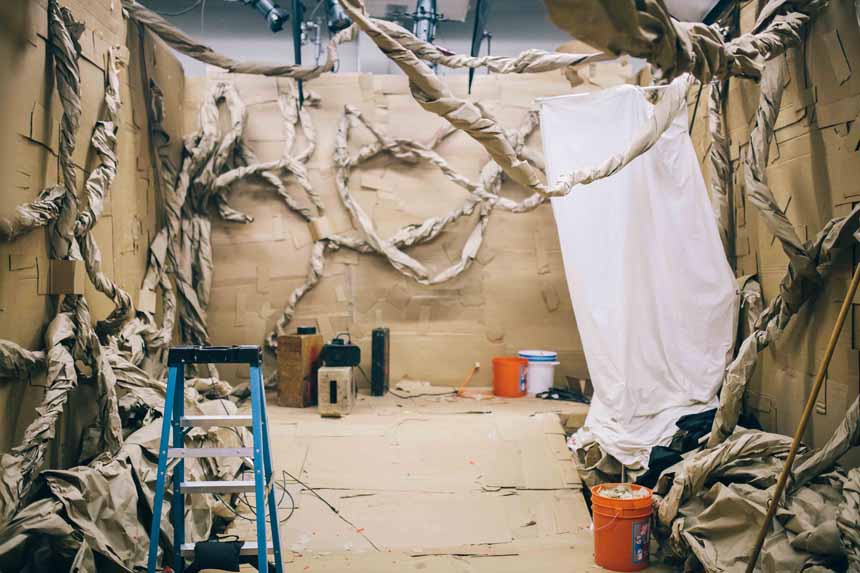 It was a mad rush to build one set while shooting out another. Art Director Jeff White came from a theatrical background, and knew how to repurpose walls for quick set turnarounds, which was essential to making our days. We never had room for more than two sets at a time, so construction was continuous throughout shooting. A battery of screw guns, saws and hammers was unleashed every time I called ‘Cut!’ as the Art Department scrambled to have the next scene’s surroundings available for Camera.

Very few sets were left standing for more than a day. Standard practice was to stage a blocking rehearsal on an incomplete set, send the actors to hair and make-up while Camera tried to light during final construction, then bring the actors in and shoot the scene, while the Art Department and an army of volunteers built the next set just a few feet away in between takes. When we wrapped the actors at the end of the day, we then destroyed whatever sets we’d built on camera for the Maze Implosion Montage at the film’s climax. Even the Origami Pit was only in existence for half a day, and one of my favorite sets, The Kubrick Corridor, was only standing for about three hours. 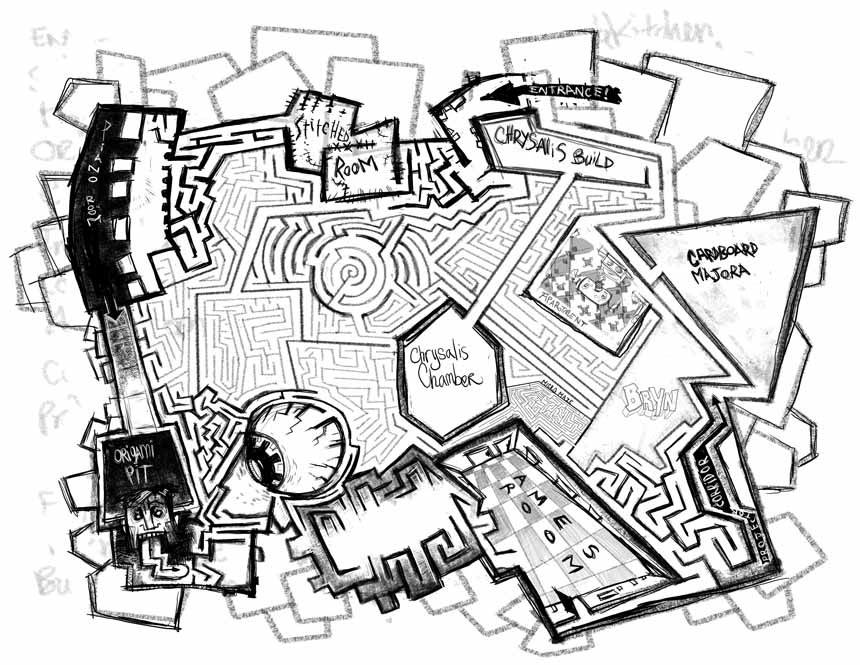 Cinematographer Jonathan Boal employed a clever combination of aspect ratio, lighting schemes, and lens choices to do the impossible: make our tiny spaces seem endless in their expanse, yet deliberately claustrophobic at the same, so we were always aware that our characters were truly trapped. Jeff’s construction complemented this effort with doorways and curving hallways to nowhere; grates that suggested other rooms, other stories, other depths; pipes that spewed smoke that must be coming from SOMEwhere; all of which combined to give our spaces a depth and breadth and life far beyond their reality. Sound Designer Ugo Derouard further enhanced the world by giving each room its own unique room tone, by letting each new space effect the way voices carried and echoed within it, and by adding mechanisms and curiosities, knocking and pinging, just outside the walls and under the floors, so The Maze was forever buzzing with life in the spaces beyond what you saw on the screen. 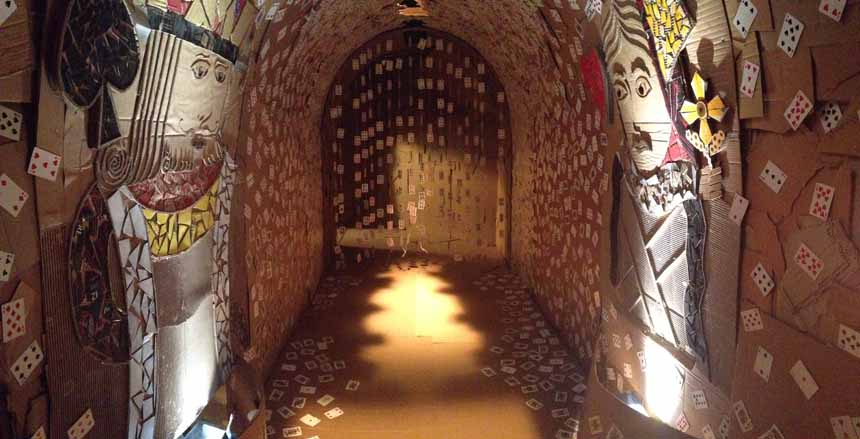 A note about the construction materials: when it looked like the movie might finally happen, Producer John Charles Meyer lead a charge to collect cardboard and paper donations from friends, family, and a few business contacts, and loaded a cube truck full of more cardboard than we ever thought we’d need from a generous American Apparel warehouse that gave us the run of the place at no cost. But we ran out of materials by the second week of production. If it weren’t for the luck of shooting next to a Solar City and their cardboard-designated dumpster, and having a producer willing to dumpster dive every morning (including that of his birthday) to bring us new toys to play with, we would’ve been lost…all told, we went through an estimated 30,000
square feet of cardboard, almost all of it donated and repurposed.

Many of the looks for the film were determined ahead of time with gorgeous concept art from Co-Production Designers Trisha Gum and John Sumner, but some of my favorite rooms were more spontaneous creations. The aforementioned Kubrick Corridor (you’ll know it when you see it—it’s 2001 meets the bowels of Bespin from Empire Strikes Back) was the result of making the most of our donations: we came upon palettes of pristine cardboard at American Apparel and were disheartened to discover upon closer inspection that they were punched through with holes. ‘Take them anyway; we’ll think of a way to use them.’ Fortunately, we took enough to build a hexagonal space station hallway for one of the film’s most intimate moments. On the fly, Jeff chose squares as a theme for the walls of the mini-maze, a wonderful extension of Dave’s habit of boxing himself in, which prompted comparisons to Decker’s apartment in Bladerunner, the surface of the Death Star, and The Well of Souls from Raiders. 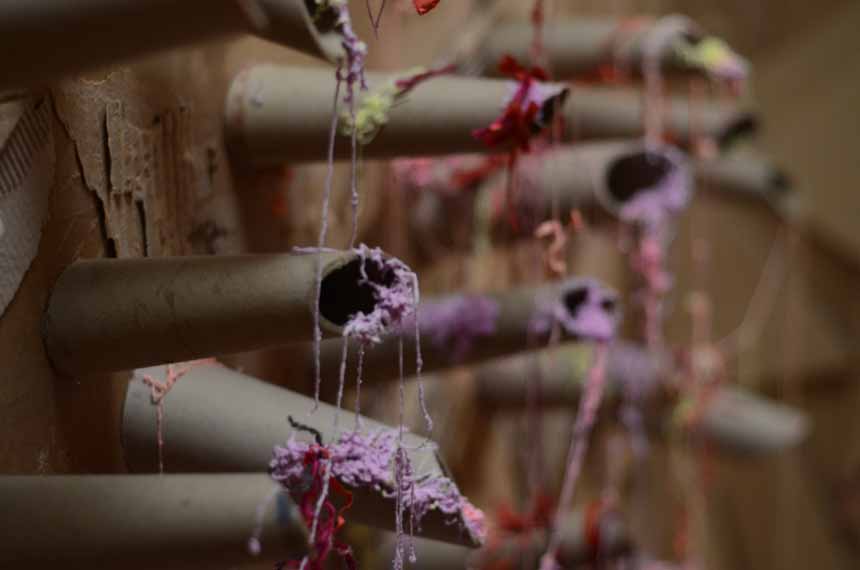 There was a wonderful moment of synergy when I knew the movie had become something bigger than all of us: for the Spike Room, in which Tim Nordwind’s Greg gets impaled on industrial cardboard thread spindles (thanks again, American Apparel!), the design team went with triangles for a distinct look. Then Tim walked on set in a great shirt, chosen by Daniel Selon, covered in triangles. Stephanie Allynne joined us next, wearing two beautiful triangle earrings…I would love to claim we had all collaborated to get there, or that I had mandated this moment be defined by the triangle for some glorious plot-and-themedriven motivation, but the truth is, much like The Maze itself, the movie was taking on a life of its own, and it was becoming our job to stay out of the way and let it live.

Once we had a very rough cut assembled, we screened it for department heads and asked ourselves: ‘What else? What more can we do?’ That exploration resulted in four additional days of pick-ups spread out over the next year, as we continued to raise funds and refine the edit. These additional days brought us the Looney Tunes-inspired Pipe Tumbling Gag, the Paper Bag Puppet Scene, and the pan through the floor from Jane’s springing of the booby trap to reveal the inner workings of The Maze below (and my personal favorite touch, a tiny cardboard cockroach). We also left the design, build, and shoot of the functioning zoetrope for the film’s climax until just a month before our World Premiere at Slamdance. 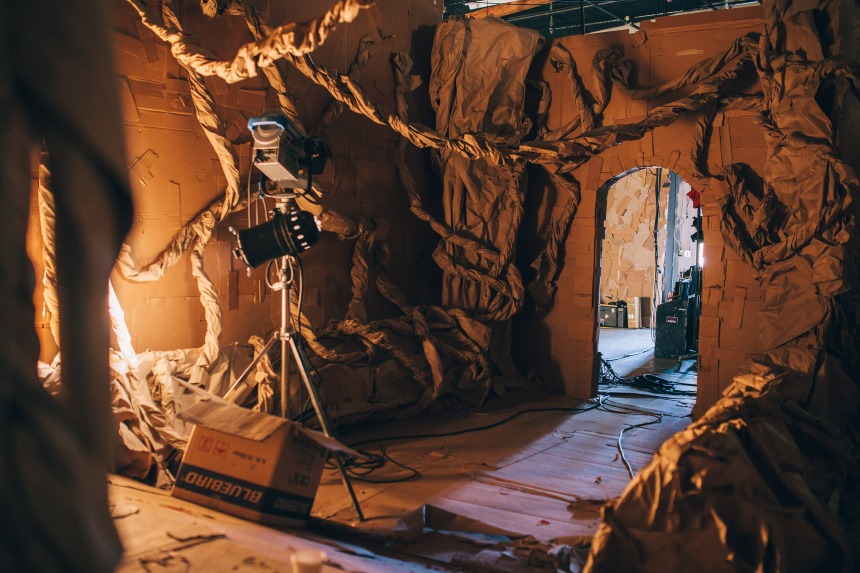 Looking back, it honestly shouldn’t have worked. I won’t divulge our shooting budget, but I can promise you it’s at the very least less than half of what you think it is. If there had been one weak link on our production team, the whole thing would have fallen apart. We had a perfect schedule (courtesy of our 1st AD Alexander Armero), an impossibly talented and devoted team that would not let us fail, and an immense amount of luck. When you destroy everything as you go, there is no going back; if you didn’t get the shot, didn’t capture the moment, tough nuts—that moment is long gone. So you damn well better have a rock star Script Supervisor, like our savior Amy Arter. We were even more ambitious than the film suggests—some fun ideas had to get reshaped or abandoned along the way in the interest of time and budget limitations. But I stand proudly by the results; we asked the impossible from our team, and they delivered, over and over again. I very much look forward to paying them what they’re worth on the next one. 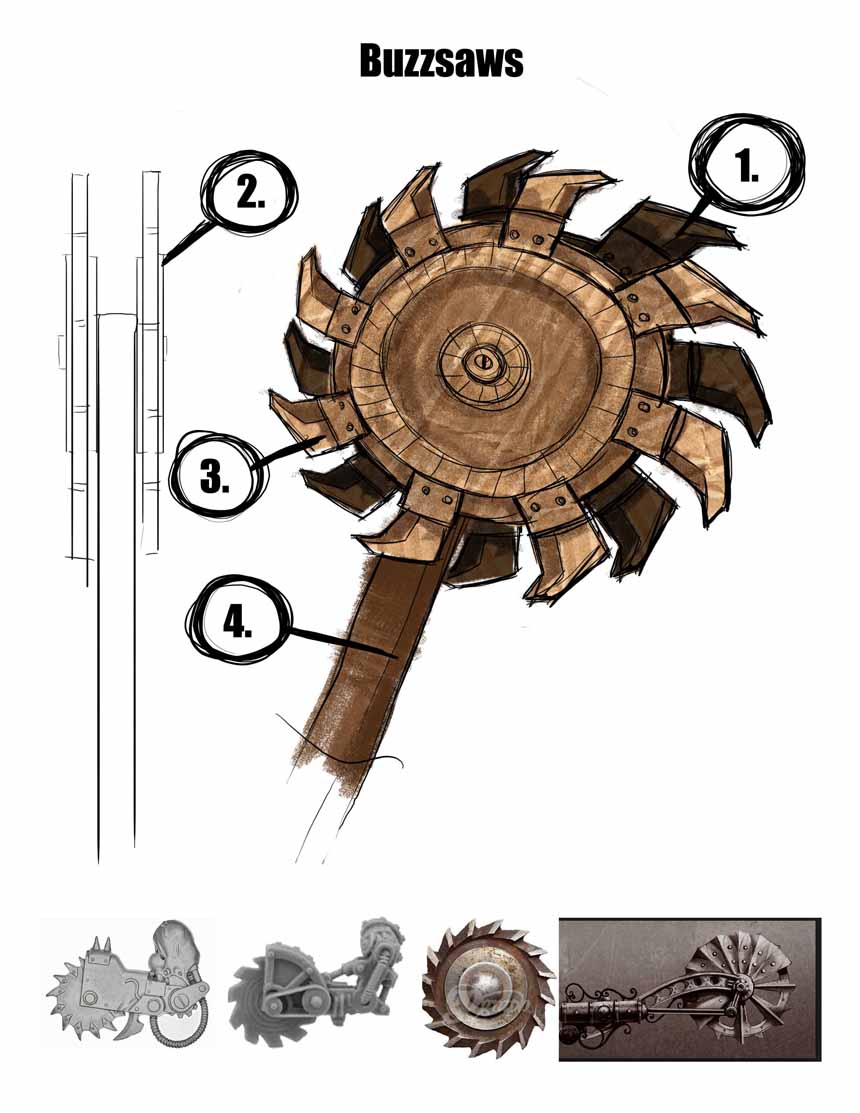 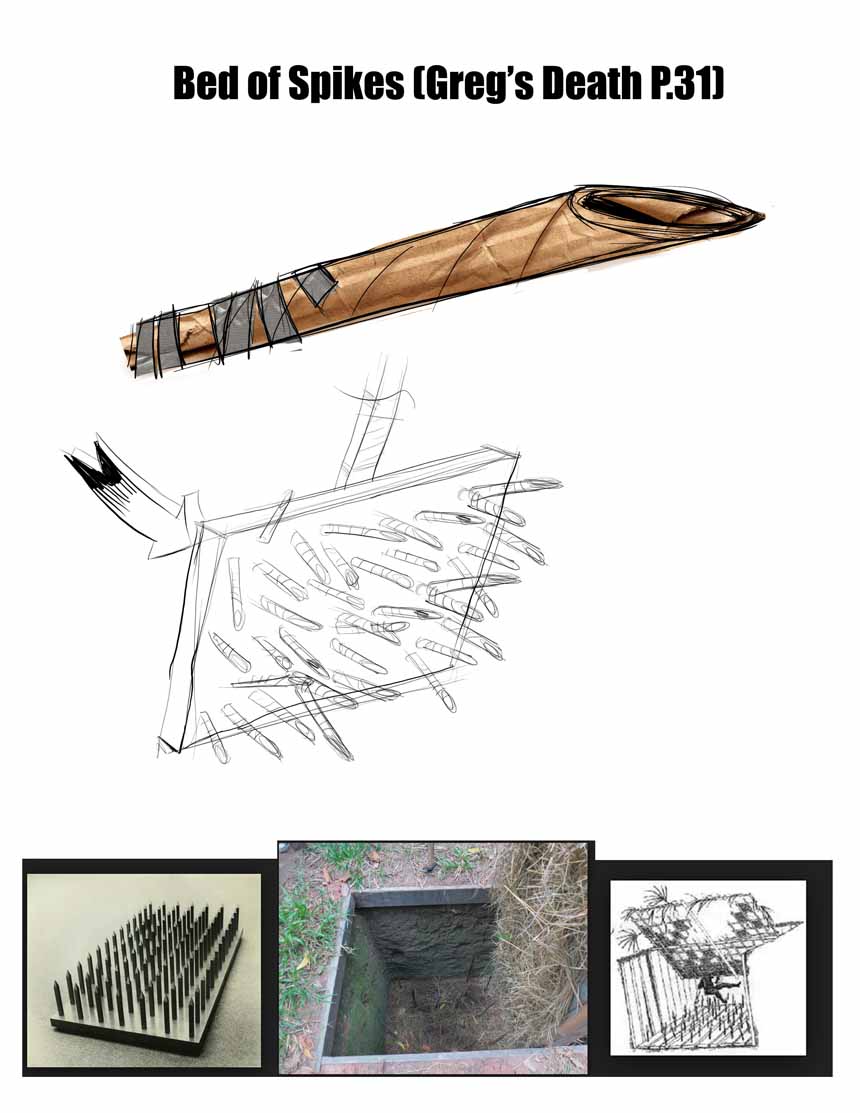