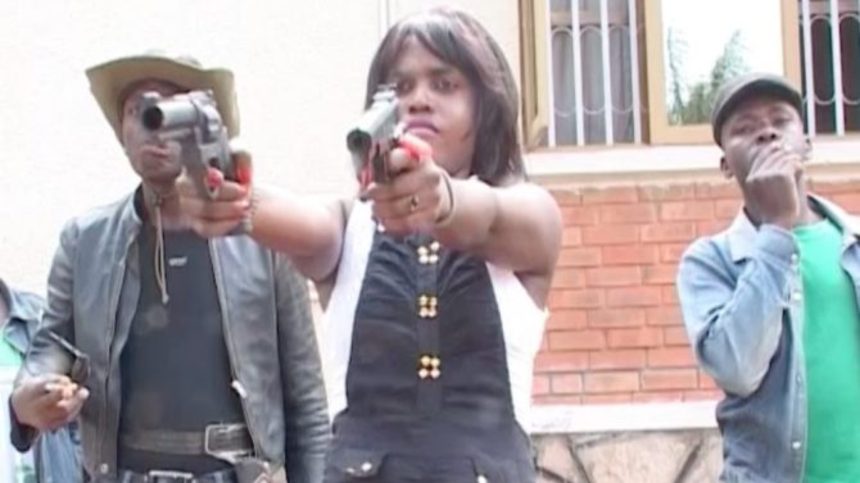 Bad Black came out of nowhere to win the Audience Award at Fantastic Fest 2016; but anyone who has seen the film wouldn't be surprised. The work of self-taught filmmaker Nabwana I.G.G., is a sure-fire hit for fans of genre cinema, not to mention a great addition to the new wave of grassroots African film. Produced over several years with a tiny budget (estimated at about $65) in the slums of Wakaliga, it is a delirious, high-octane, DIY mix of action, street fighting, intense drama and comedy.

The titular character, the bad-ass Bad Black, is a street-smart women (played by Nalwanga Gloria), in charge of the gang she has been with since she was a child, when she took revenge on their Fagan-like leader and shot him dead. She looks after her 'children' using her fighting skills and feminine wiles, preying upon a hapless American doctor (Alan Hofmanis). The doctor, seeking his own revenge, must learn the mix of martial arts and street fighting ubiquitous to this part of the world, to get his money back. Meanwhile, Swaaz (short for Schwarzenegger) robs a bank to pay for medicine for his ill wife, with his child sidekick, and Bad Black herself is determined to root out all who have wronged her.

That's probably more plot description than is necessary; indeed, I walked into the film knowing nothing about it, and was happy to ride this incredible and wacky train. And when I say DIY, I mean it; handheld camera, rear screen projection, sets made out of cardboard. But this is all part of the fun and the brilliance. For most narrative film, if you've got a good story and good actors, everything else is pretty much secondary, and Nabwana gives us both.

Bad Black arguably has the best use of voiceover; somewhat a description of what's happening on screen, it runs more like a sports commentary, with emotional engagement and reaction that adds immensely to the enjoyment of every scene (the kind of commentary that's likely running though the spectator's head). The editing is pretty slick, with fast cutting keeping the energy apace while slowing down for the more serious moments. While most scenes take place in cramped spacdes, Nabwana takes advantage of this with lots of close-ups to engage with characters, and focus on some pretty awesome fight scenes (seriously, we need more martial arts films from this guy).

With nods to action stars such as Schwarzenegger, Jean-Claude Van Damme and Zoe Bell, reverence to Chinese martial arts films, but with its unique brand of Ugandan storytelling and style, Bad Black will hopefully be the film to put Wakaliwood on the genre cinema map.

Do you feel this content is inappropriate or infringes upon your rights? Click here to report it, or see our DMCA policy.
Alan HofmanisBad BlackFantasia 2017Nabwana I.G.G.Nalwanga Gloria