Slamdance 2017 Review: DAVE MADE A MAZE With Entertaining Traps 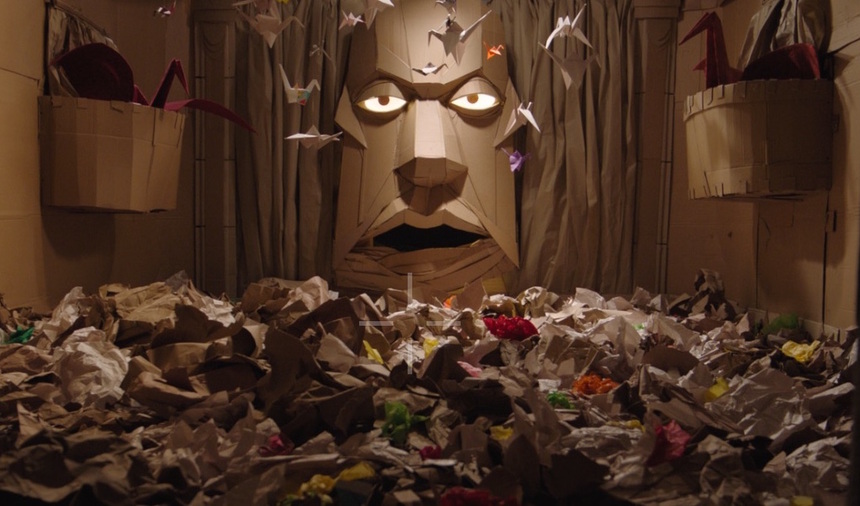 When she gets back from a short trip, Annie discovers that her boyfriend Dave has built a maze in their living room and that he doesn't want to come out of it -- or rather, that he can't. He tells her that he's stuck in what he's been building for the past few days and that he's not able to find his way out anymore. Annie has no choice but to gather a rescue team to free her boyfriend from his fantastical creation, where booby traps and monstrous surprises await...

Such is the crazy premise of actor Bill Watterson's feature debut, Dave Made A Maze, a film that could very well be the result of Michel Gondry making Labyrinth as a slasher movie. Once the characters enter the maze -- which is, as the protagonist points out, much bigger on the inside --, they discover an insanely creative world made out of cardboard where origami swans, deadly pitfalls and (of course) a minotaur will force them into a fight for survival.

Like in Gondry's DIY oneiric films, Dave Made A Maze displays a great quantity of amusing, colorful concepts that completely encapsulate the protagonist's mind. The epic art design and ingenious sets provide a never-ending treat for the eyes while they bring enough content to let the playful story unfold. The creative team used more than 30,000 square feet of cardboard to build what was necessary for the shooting and worked with a combination of practical effects that range from stop motion, puppetry, animation and optical illusions.

Both main actors, Nick Thune and Meera Rohit Kumbhani, deliver fine performances by playing along with the handmade oddities surrounding them, with the supporting members of the cast contributing to the film's efficient humorous side. A satisfactory element also comes from the character of Annie, who proves to be a strong female lead with a lot of heart.

While few complaints can be made regarding the aesthetics of Dave Made A Maze, Steven Sears' script however suffers from its repetitive nature and its lack of ambition. The labyrinth surely does serve as a multifaceted metaphor that reflects Dave's situation in life - him being literally stuck, facing a wall - and echoes his feelings as a failed artist. It also helps picture in a vivid way how one can sabotage themselves and their loved ones, yet it always comes back to the same schematic development and never really manages to reach higher ground. Too bad that the various tests and steps that the characters have to go through don't mirror the protagonist's internal conflict in a more cathartic way, similarly to what Edgar Wright achieved in his brilliant coming-of-age Scott Pilgrim vs. the World.

Nevertheless, this frustration never really takes the fun out of Watterson's first film. With its explosion of creativity, its thrilling concept and its lovely characters, Dave Made A Maze is a fine example of how a creative team can overcome the restrains of a tight budget to offer a fun ride. The film shouldn't have too much trouble to please its audience at its premiere at Slamdance, where it will surely start a great festival run.

Do you feel this content is inappropriate or infringes upon your rights? Click here to report it, or see our DMCA policy.
bill wattersondave made a mazejames urbaniakmeera rohit kumbhanimichel gondrynick thunescott pilgrim vs. the worldslamdanceslamdance 2017steven sears