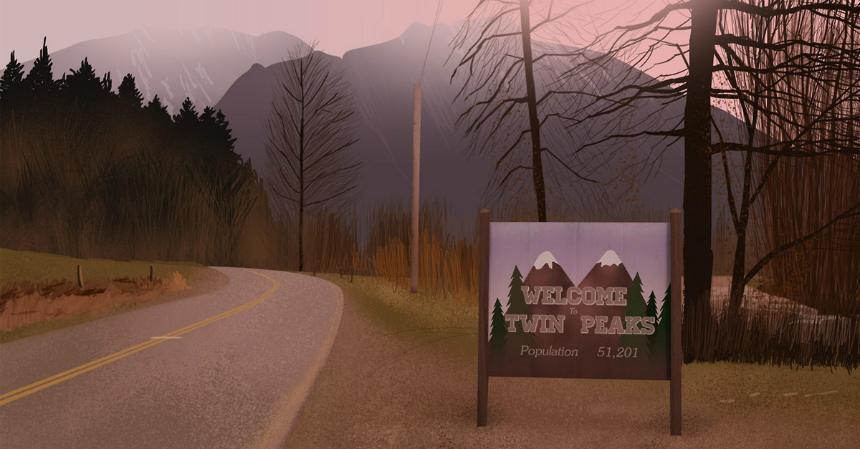 On Sunday evening, April 8, 1990, I sat down to watch a highly-anticipated show, alone in my tiny room in Brooklyn. I watched my tiny television until 9:15 p.m. or so, Eastern Standard Time. And then I began to cry, slowly at first and then uncontrollably.

This was my introduction to Twin Peaks. The ominous opening musical theme, composed by Angelo Badalamenti, was certainly quite chilling, though the discovery of Laura Palmer ... well, I knew about that already; it happens only a few minutes after the show begins. It was also, as I recall, part of the advance publicity by the ABC television network that was impossible to ignore, even if, like me, you didn't watch much television or read many newspapers, our two most likely sources of information at the time.

What gripped me immediately was David Lynch's command of the medium. Oh, sure, I'd been impressed by the touching poignancy of The Elephant Man when I saw it years before, as well as the beauty of the black-and-white presentation. But I missed Dune in theaters and then could only see the chopped-up versions on TV, which were an abomination, and I skipped Blue Velvet and Wild at Heart, which both sounded far too perverse for my taste at the time.

Yet the idea of that perverse filmmaker creating something that could air on network television was delightful! So I made sure to be home in time to watch the first episode, and once my initial wave of sobbing had subsided, I found myself very much attracted to the cool fashions, Northwest U.S. scenery (where I'd never visited at that point), and the oddball characters.

In that first episode, the characters ranged from endearing to puzzling to off-putting to fascinating to downright reckless and dangerous. In other words, I was hooked long before the end credits rolled.

I was a faithful viewer that first, eight-episode season, even though there was a big drop in quality from the first to the second episode. Who killed Laura Palmer was the big mystery that supposedly drew the public's attention, like "Who shot J.R.?" had been for Dallas years before. But I was less interested in the identity of the killer and more fascinated by the atmosphere and the characters.

The following season, which began in September 1990, kept me on the edge of my seat through its first six episodes, when Laura's killer is unveiled. Lynch directed three of those episodes, and the quality was quite high, but the show had trouble keeping its footing after that.

As the season dragged on, my interest waned in favor of personal relationships. My friends and their family members suddenly seemed far more deserving of my time that a television show which had already run its course.

After skipping a number of episodes, I returned to watch the last two episodes, which were broadcast on June 10, 1991, though they made little sense without having seen everything that led up to them. And that was that. I certainly was not interested in watching Lynch's followup movie, Twin Peaks: Fire Walk With Me, especially since it recast certain familiar characters.

Time heals all wounds and eventually I found myself rewatching the episodes from the first season that I'd taped on VHS. Lynch's Mulholland Drive opened my eyes to the filmmaker's disturbing visions, and my appetite for his work was once again ignited.

When the so-called "Definitive Gold Box Edition" was released on DVD in 2007, my love for Twin Peaks was reawakened. I soaked in every episode thoroughly, watched the entire series in sequence, and absorbed all the special features. The show entered into my bloodstream. I even watched Twin Peaks: Fire Walk With Me, which was fascinating, if not as gripping as I had hoped it would be.

Now it's five years since I reluctantly sold the gold box edition so I could pay my rent, and two years since a revival of the show was announced. Last night I subscribed to the Showtime premium cable service so I could watch the new version, which debuts on Sunday.

Then I watched the first episode again, and this time I started crying when I heard the first notes of the theme song, and cried throughout the first 15 minutes, and then I had to pause for a few minutes to gather my emotions and watch the rest of the episode.

Twin Peaks is the only television show that's ever made me cry. I think it's a combination of the minor-chord music, the progression of the theme, maybe the way that the episode depicts grief, and perhaps how the characters know instinctively that something horrible has happened; they don't need to be told, they can sense it from what's happening around them.

When it comes to grief and loss, that feels very authentic in my personal experience, so that may be why I relate so strongly to its presentation, and also why I've avoided rewatching the show for the past six or seven years.

Now that I've made it through that first brilliant episode, I can't wait to revisit every single episode, and also to see what Lynch and company have cooked up for the new season.

I want cherry pie and some damn good coffee.

Critical Distance is a column that appears occasionally.

Do you feel this content is inappropriate or infringes upon your rights? Click here to report it, or see our DMCA policy.
David LynchMark FrostTwin Peaks