Critical Distance: An Introduction, Inspired by DRESSED TO KILL 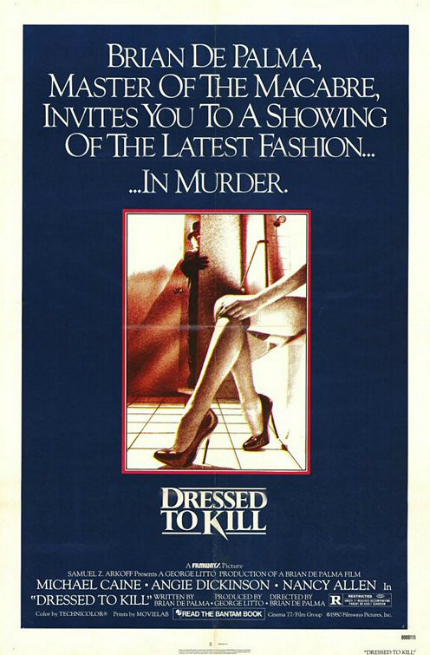 The last movie I watched in 2016 was Brian De Palma's Dressed to Kill, which was almost a random selection from the numerous discs I've bought but haven't watched yet.

I first watched the movie on broadcast television, sometime in the 1980s, and even all cut up and edited and interrupted with advertising, its fundamental power shook me up. Since then I've seen the theatrical release version multiple times, on cable and on DVD, and so when I popped it into my Blu-ray machine, I thought it might serve as a comfortable horror blanket, a bulwark against the expected gunfire and fireworks of a typical New Year's Eve in my low-budget apartment complex.

Not only about New Year's Eve -- it was 10 times worse than expected and the extreme noise didn't halt until half past four in the morning -- but also about Dressed to Kill. Simply by repetition and familiarity, I thought the violence would not be as disturbing as it once was, but the elevator scene was even more intense than I recalled, and later on, the language was more forthright than I remembered.

Frankly, I was quite surprised, until I watched the extra features on the Criterion Blu-ray and learned I was seeing the 'director's preferred version' for the first time. (Laugh it up, fuzzball De Palma / Criterion fans! Wait until you get older and start forgetting things.) In any event, it made me realize I should make a greater effort to revisit old favorites without the pressure of a release date looming.

Certainly there's value in blasting out first impressions. Twitter is a good tool for letting the world know that you've seen a hot new title and you're entranced / repulsed / indifferent. Sometimes I've seen a movie that started at midnight and then eagerly banged out a review as soon as I had access to a keyboard.

But a little more time for reflection never hurt anybody. If you're like me, it's good to think about why you reacted the way you did, whether it's positive or negative.

When I watched A Monster Calls for the first time at Fantastic Fest, for example, I kept dozing off. About six weeks later, I was fully awake during a second theatrical viewing but found I had a similar reaction: familiarity with its preachy message and schematic storytelling did not diminish its emotional impact. Sometimes multiple viewings reinforce the original reaction, while at other times that impact is diluted.

In the case of Dressed to Kill, I wasn't "surprised" by any of the twists or turns, though I did lift my eyebrows at the small things I hadn't seen before. But the emotional impact actually deepened. As I grow older, I'm more understanding of characters who are somewhat older, so I felt more empathetic for Angie Dickinson's character, especially knowing what her fate would prove to be, while my younger self naturally pulled for Keith Gordon as her son.

All this to say that I'm still rolling the movie around in my head and wondering about its place in my personal De Palma canon.

Going forward, this particular column will be published fortnightly and will mostly focus on fresh looks at newer releases that we haven't already reviewed at the site. (And occasionally older films that don't fit into my 70s Rewind column.)

My goal is to spend a little more time thinking about individual movies and why I'm reacting to them in the way that I do. I hope you'll come along on the journey.

Do you feel this content is inappropriate or infringes upon your rights? Click here to report it, or see our DMCA policy.
Brian De PalmacolumnCritical DistanceDressed to Killfeature