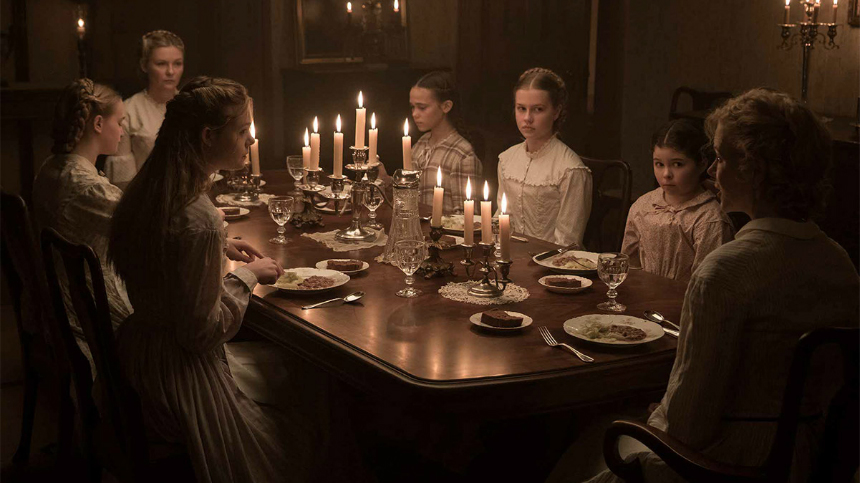 As I noted, Siegel's film "is more layered, even more problematic -- and open to interpretation and later repudiation -- than I had anticipated, so I am very much looking forward to Sofia Coppola's reading and presentation of the material." Our own Shelagh Rowan-Legg saw the film at Cannes and filed a a very fine review, writing in part: "While not without some problems of gender representation, the film is a gorgeous and campy romp, disguising itself as a period piece with just the right touch of horror."

She also noted: "This adherence to stereotypical gender roles, and the idea that all women are just waiting for a guy to show up so they can have a catfight, is so tired that it's more than a little annoying that a woman director would choose this story. ... We are definitely given the women's point of view, and John's charm is apparent to us even if it isn't to them (though that is another source of frustration). But Coppola finds the dark humour in the situation, and the later half of the film is filled with brilliant and sharp laughs."

Now that the release has expanded nationwide in the U.S., I saw The Beguiled with maybe 20-30 other white people -- mostly folks taking advantage of the senior citizen discount -- this past Friday morning. What struck me first was the extraordinarily dark presentation, as in "barely lit." The 1971 version, shot by Bruce Surtees, was also beautifully, softly lit, but Coppola and director of photography Philippe le Sourd take that approach to extremes; in the theater where I saw it, I could barely make out faces in a number of scenes. It's a daring decision. (Perhaps it's a family trait that Coppola inherited from her father? See The Godfather.) But it certainly works as far as reinforcing the time period in which the film is set.

Thomas Cullinan's novel, first published in 1966, served as source material for both films. (Coppola's version also credits the 1971 script by Albert Maltz and Irene Kamp.) The novel, as I understand it, includes a black woman who is a slave to the white women. In Siegel's film, Hallie is strongly enacted by Mae Mercer, who, quoting myself, "cuts a strong figure [as] a slave who is growing tired of containing her rage."

Hallie is a constant reminder of the Civil War that rages outside. She's also a counterpoint to John McBurney (Eastwood), who, through flashbacks, is shown to be a disreputable character. He too is imprisoned, but it's a temporary condition. He seeks escape through lies and deception, putting his own selfish interests ahead of anything and everyone else, no matter who he might hurt, mostly because he doesn't really want to return to war.

Hallie doesn't have that option. She is enslaved and is expected to obey immediately whatever commands she is given. Escape is not an option for her.

Updating the story and characters with present-day racial realities in mind would have made for a fascinating twist. Instead, Coppola decided to excise the character entirely. Yup, not a slave in sight.

For that matter, the Civil War itself really doesn't play a role in Coppola's version. Sure, as the opening title states, it's set three years into the war on the Confederate side of the conflict, but there's barely any other hints of the damage that's been down. Coppola also eliminates the rooftop watch that was part of Siegel's version; no pressing need to see if enemy soldiers might be approaching, I suppose, even though the sounds of warfare can be heard.

She also eliminates a scene from Siegel's version in which Confederate soldiers enter the house and pose a physical threat, which is faced down by the schoolmistress. In this version, the soldiers are gentler and are given a meal, off-camera, and then depart, also off-camera.

Of course, filmmakers are artists and they are free to interpret material in any way they see fit. That especially applies in this case, which is the second screen version. So what does Coppola focus on instead?

She injects more humor, for one thing, making one of the younger girls a comic relief character, delivering her few lines in a sassy manner. She also makes the schoolmistress more obviously religious, conducting nightly prayers. She makes John McBurney, played by Colin Farrell, an Irishman who really didn't want to fight in the war; he was pressed into service and yearns for peace.

Since Farrell, the actor, doesn't have Eastwood's height, he's less of a towering presence who looks a bit silly moving around in a nightshirt with crutches. Instead, he looks the ladies in the eye when he lies to them. His lies sound natural. And he's seen much less on crutches.

While Geraldine Page was quite formidable as the schoolmistress Martha, Nicole Kidman is fully her equal, even though Coppola removes (mostly) her growing attraction to John. Without a slave to boss around, she treats her young charges as slaves, at times, though she also asks their opinion at crucial times, making them her co-conspirators on big decisions. That's a huge change that would probably have been rare and quite shocking in the 1860s, or at least it would have raised eyebrows.

As Edwina, Elizabeth Hartman struggled with a role that was underwritten and without clear motivation. In the same role, Kirsten Dunst shows her mastery of the craft, suggesting subtle changes in her face and voice, even if the words are not there to back it up.

Oddly enough, Elle Fanning struggles a bit as Alicia, whose budding sexuality leads her to take foolish actions. Of course, the 1971 version featured an under-18 character in about the same role, so it's understandable that she's aged up (even though ages are never given); still, it's left hazy and unresolved.

As the film moves toward its end, Coppola also leaves out the surgical details that Siegel included, and places less emphasis on a certain unfortunate turtle. Both decisions are fine, but the absence of much evident affection between Martha and John makes it difficult to understand why John screams so loudly that he's being punished for her feelings near the end of the film.

Was that intentional? It's not clear. Perhaps Coppola wanted to illustrate that men often try to blame women for their own actions? If so, Martha barely reacts to John's accusations; considering her own religious beliefs, I would have expected her to deny firmly the charges that he makes.

So, for me, Sophia Coppola's The Beguiled ended up being more fascinating for what it leaves out than for what it includes, but that's mostly on the basis of my having seen the original recently.

Have you seen the new film? How about the 1971 version? What are your impressions?

Critical Distance allows the writer to contemplate a life spent at the movies.

Do you feel this content is inappropriate or infringes upon your rights? Click here to report it, or see our DMCA policy.
Clint EastwoodCritical DistanceDon SiegelKirsten DunstNicole KidmanSofia CoppolaThe Beguiled