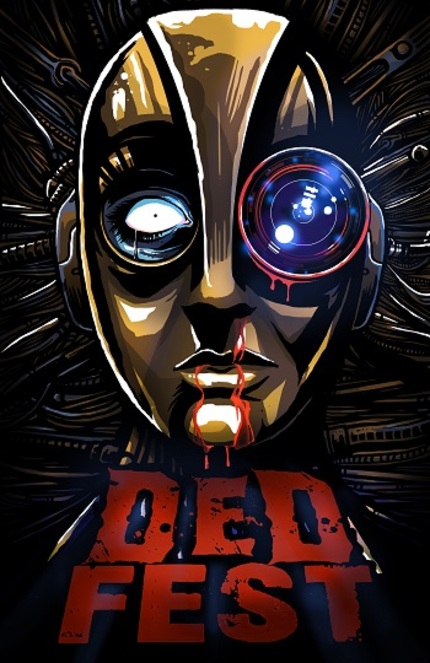 DEDfest kicks off in Edmonton, Alberta, Canada next Tuesday and they have announced the remaining films in their lineup. There are a lot of standouts including Goodnight Mommy and Ugandan action flick Who Killed Captain Alex? You can read all the write-ups below.
As well, they have announced the guest list for the festival. Multihyphenate, Henry Rollins will be coming to town for his flick He Never Died with director Jason Krawczyk and producer Zack Hagen. Jeremy Gardner will be in town for Tex Montana Will Survive! DEDmonton native Tyler McIntyre will catch the local to the cinema for Patchwork. Josh C Waller will be in town for the Camino screening and Gabriel Carrer will be in the house for the screening of his latest, Demolisher.
Tickets are on sale at dedfest.com

WHO KILLED CAPTAIN ALEX - Uganda's first action-adventure movie, directed by Nabwana I.G.G. (Godfrey Geoffrey) who wrote, directed and produced the film from his home in the slum of Wakaliwood. After the trailer went viral in 2010, garnering tons of laughs and praise from viewers, Nabwana set out to turn it into a feature length with very minimal filmmaking experience and virtually no budget.
War is waged after a mafia boss' brother is captured during a shootout and troop leader Captain Alex is murdered in cold blood. The captain's brother seeks to avenge his brother's death while the mafia takes to the skies to bomb the town of Kampala.
Starring: Kakule William, Kakule Wilson, Sserunya Ernest and G. Puffs
KNOCK KNOCK -The latest thriller from divisive contemporary horror auteur Eli Roth follows family man Evan Webber (JOHN WICK'S Keanu Reeves) as he engages in a dangerously seductive game of cat-and-mouse with two teenaged girls who show up at his door unexpectedly one weekend while he is home alone, in the absence of his wife and child.
Starring: Keanu Reeves, Lorenza Izzo and Ana de Armas
TOO LATE - Academy Award Nominee John Hawkes stars in Dennis Hauck's L.A. thriller TOO LATE. Hawkes plays a private eye searching for a missing girl through the seedy streets of Los Angeles, facing off against hoodlums, femme fatales, crime lords and his own checkered past. Shot on glorious 35mm, each reel of the film is one 20-minute uncut scene. It's Altman by way of Tarantino--a unique film not to be missed.
Starring John Hawkes, Robert Forster, Jeff Fahey and Crystal Reed
GRIDLOCKED -A police training facility is attacked by a group of ruthless mercenaries and former SWAT officer David Hendrix and ride-along Brody Walker--a party-animal celebrity--are forced to cut their trip short in order to fight for survival.
Starring: Dominic Purcell, Cody Hackman, Stephen Lang and Trish Status
PATCHWORK - In a comically deranged version of Lucky McKee's MAY and Mary Shelley's FRANKENSTEIN, writer/director Tyler MacIntyre's horror-comedy weaves the twisted tale of three young women who party a little too hard one night, only to find themselves stitched together into one body. They are forced to overcome their differences and exact revenge upon those who turned them into such a hideous anatomical atrocity!
Starring: Tory Stolper, Tracey Fairaway and Maria Blasucci
GOODNIGHT MOMMY - The highly anticipated Austrian art-house horror feat from writing/directing duo Veronika Franz and Severin Fiala finds two nine-year-old brothers waiting in the solitude of their countryside home at the edge of the woods for their mother to return home after undergoing cosmetic surgery. What transpires is an exercise in the human horror of identity crisis, maternal estrangement and the infringement of parental trust.
Starring: Susanna Wuest, Lukas Schwarz and Elias Schwarz
THE MIND'S EYE - Writer/Director Joe Begos' follow up to his 2013 homage to '80s sci-fi horror ALMOST HUMAN traverses the infinite parallels of psychic-telekinetic horror in the same vein as David Cronenberg's SCANNERS. Zack (Graham Skipper), a drifter with telekinetic capabilities, is taken into custody by the New England police and soon finds himself under the scrutiny of a nefarious Dr. Slovak (John Speredakos). Zack suspects that Dr. Slovak is holding others with telekinetic powers hostage while he uses them for his own evil intentions.  Soon Zach and the other prisoners of the institute are pitted up against Dr. Slovak in a battle to regain control over their own minds.
Starring: Graham Skipper, John Speredakos, Noah Segan, Larry Fessenden, Lauren Ashley Carter and Jeremy Gardner
CAMINO - TIMECRIMES director Nacho Vigalondo and Australian badass beauty Zoe Bell star in this taut thriller about a photojournalist (Bell) who attempts to escape her sordid history by taking on a freelance job in the remote jungles of Colombia to document an infamous religious sect that harbors their own unique brand of volatility. Bell's signature physical prowess that got her noticed in Josh Waller's 2013 thriller RAZE and Quentin Tarantino's 2007 GRINDHOUSE riot DEATH PROOF shines through this break-neck battle against the treacherous terrors of the Columbian jungle and its menacing inhabitants.
Starring: Zoe Bell, Nacho Vigalondo, Francisco Barreiro and Sheila Vand

More about Who Killed Captain Alex