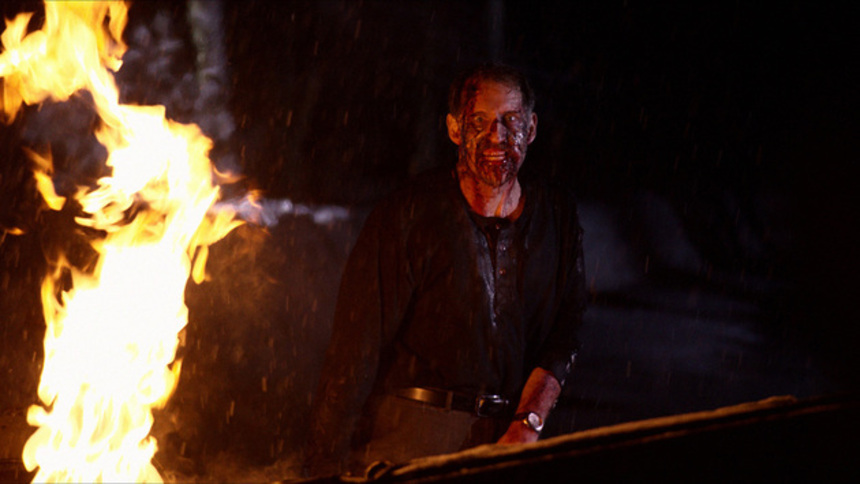 When any filmmaker with a well-received first film heads into their next project, the threat of the sophomore slump has to weigh heavily on their heads. Joe Begos' first film, Almost Human, was a lovingly crafted homage to the low-budget films of the 1980's and while The Mind's Eye, his follow-up feature, doesn't step backward, there is no real forward motion either. Instead of the sophomore slump, The Mind's Eye is more of a sophomore stasis, a film that simply repeats the low-fi charms of Begos' debut.

Graham Skipper stars as Zack, a psychokinetic drifter who ends up arrested after an altercation with an aggressive pair of cops. He's released into the custody of Dr. Slovak (John Speredakos), who takes Zack to a secretive facility where he's studying other psychokinetic people - including Rachel (Lauren Ashley Carter), one of Zack's oldest friends. Once Zack realizes the sinister Slovak intends to harvest their powers for his own gain, he and Rachel mount an escape.

The Mind's Eye is every bit as sincere and affectionate an homage as Almost Human was, full of winking moments and a memorable synth-heavy score from Steve Moore. However, where it really shines is in its gushy practical effects, and for a film that ultimately boils down to two guys staring at each other until one of their heads explodes, that's pivotal. Every combusting cranium or splatter of viscera is appropriately disgusting and calibrated for maximum audience satisfaction.

Along with glorious bits of gore, Begos displays some keen visual skill, staging a number of atmospheric moments including a neon-bathed sex scene or a fiery showdown in the snow. Where he falls short is making the film more than the sum of its parts, and while there's something to be said for efficiency, the potential he showed in his first film goes no further here.

While Begos is skilled at evoking a very specific time period in his work, he's not quite able to get his actors on the same wavelength. Graham Skipper is quietly effective as Zack and Lauren Ashley Carter does her best with a thin character in Rachel, but the actors playing the villainous characters make more of an impression.

Noah Segan and Michael A. LoCicero both turn in unnerving, intense performances as Slovak's henchmen, but John Speredakos' work as the nefarious doctor is the film's weakest element. The cheesier the scene, the hammier Speredakos plays it, and his over-the-top performance is the only element of The Mind's Eye that feels more like a negative byproduct of the films it's evoking than an homage to them.

Ultimately, The Mind's Eye is exactly what it wants to be: a cheesy homage to the 80's with some glorious gore effects. While it's hard to fault Begos for staying in his comfort zone, his sophomore effort feels stale, and hopefully his next film is able to find a better balance between his undeniable eye for viscerally satisfying moments and his budding directorial voice.

Do you feel this content is inappropriate or infringes upon your rights? Click here to report it, or see our DMCA policy.
Fantastic Fest 2015Joe BegosThe Mind's Eye