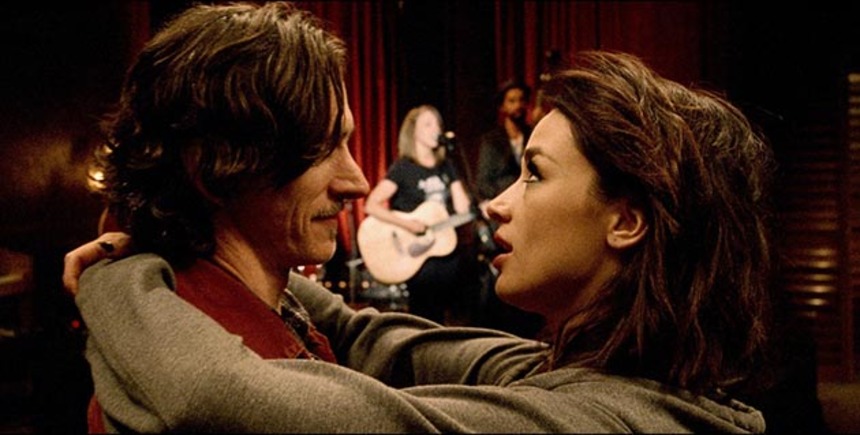 There is a classic Hollywood feel that prevails throughout Dennis Hauck's debut feature Too Late. Namely this is due to the fact that it's shot on good old 35MM film -- a feat almost never attempted in today's world of low budget indie features. Add that to the private eye storyline and LA-soaked scenery (not to mention the "classic" treatment of the female characters) and you have a film that is aged well beyond its years. All of that works well for Hauck who should be hailed for a very stylish and assured debut.

Note: If you're the kind of person who likes to go into a film completely blind, you may find some of the information in this review revealing. While there are no plot spoilers, some of the technical aspects of the film discussed here may detract from the surprise as they are revealed throughout. Go watch the movie and come on back.

Taking the term "twisted tale" to new heights, Too Late started with a challenge. Hauck wanted to know if he could tell a story in five reels; each of those reels being just one single shot. He then took those reels and mixed up the order of the film to manipulate the revelation of information. The effect is stellar. Not only does each shot inspire awe from a technical "how did they do that?" perspective, but each shot also advances the story in a totally nontraditional way. It's like Pulp Fiction meets Touch of Evil.

The story follows the exploits of a private detective named Sampson played by John Hawkes. While Sampson may be the main character, it's hard to call him the protagonist as the audience is always kept at more than arm's length from Sampson's motivation and goals. But Hawkes thrives in this hardnosed role with Sampson taking just as much punishment as he dishes out. The first hint to where each segment falls in the timeline is how much blood Sampson has on his suit.

Up to Hawkes's challenge on the acting front is young starlet Crystal Reed who plays the distressed stripper Dorothy. Dorothy perfectly exudes the innocence needed for what is essentially the only sympathetic character in the film. A particularly tender moment towards the middle of the film between Dorothy and Sampson provides the emotional core of the story and becomes the lasting image of Too Late.

Another excellent performance as another stripper comes from Dichen Lachman. This points to a troubling trend in Too Late: a treatment of the female characters that is even more "classic" than the old timey medium on which the images are captured. Most of the women are relatively helpless, they rarely have much, if any, clothing, and they mostly seem to exist to service the sexual desires of the men in the story. Still, Hauck succeeds in making the nudity sexual without being sexy and while the decisions may be questionable, they do stop a hair short of being exploitative.

A final word should be saved for the excellent music throughout the film. Much of it is recorded live and the work in this department is very impressive. That really is the applicable word to describe Too Late. Between music, performances, cinematography, and just the guts to attempt such a concept, Hauck has a very impressive debut on his hands, and we'll be watching to see what he attempts next.

Do you feel this content is inappropriate or infringes upon your rights? Click here to report it, or see our DMCA policy.
35MMJohn HawkesLA Film Fest