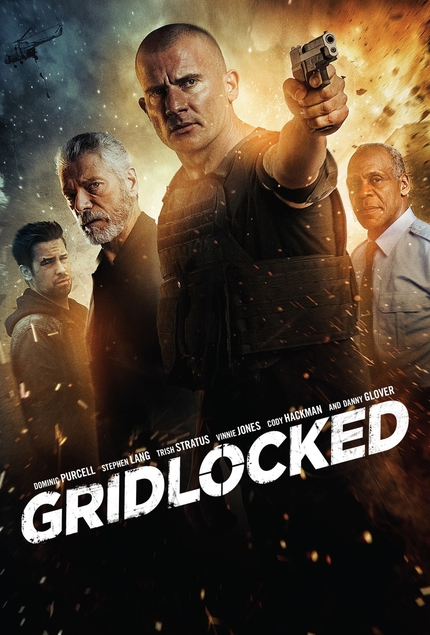 Dominic Purcell anchors the cast of Allan Ungar's indie action film Gridlocked and with the film set to have its world premiere at Fantastic Fest later today the first clip is freshly arrived online.

David Hendrix (Dominic Purcell) has got it all under control. Highly trained, highly competent, a complete and total badass, there's nothing he can't handle. Whether you throw a strung out junkie or a mercenary packing fully-automatic heat at him, Hendrix can take it all on without blinking an eye. At least that's what he thinks... until he meets Brody Walker (Cody Hackman).

A hard partying star whose career is more TMZ than the multiplex these days, Walker has one chance left to straighten himself out if he wants to avoid living in a cell. As a sort of wake-up call following his latest run-in with the law, Walker is assigned an extended ride-along with the force. Call it a chance to see his potential future, if you like. To Hendrix - saddled with the unwanted and thoroughly unhelpful tagalong - it's nothing but a pain in the ass. But when everything goes to hell, the unlikely duo will have only each other to rely on.

Five time world karate champ Hackman made his presence (and fists) felt at the festival last night by punching fest founder Tim League many, many times in the Fantastic Debates and the duo are joined on screen here by Danny Glover, Stephen Lang, Trish Stratus, and Vinnie Jones. Check out the clip below.

Do you feel this content is inappropriate or infringes upon your rights? Click here to report it, or see our DMCA policy.
actionallan ungarclipcody hackmandanny gloverdominic purcellgridlockedtrish stratus