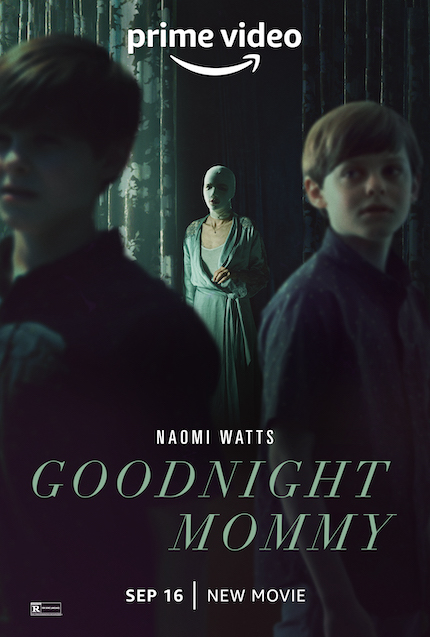 My primal reaction when watching Goodnight Mommy was extreme unease and discomfort.

Directed by Veronika Franz and Severin Fiala, the mysterious thriller left me feeling emotionally drained after its screening at Fantastic Fest in September 2014. My fellow writer Pierce Conran was in much better shape to write about it, which he did with his superb elegance. So it is with mixed emotions that I report on a remake that is coming out next month.

On the plus side: Naomi Watts. She is excellent in just about everything she has done, and is a big bonus in a remake, such as The Ring or King Kong or Funny Games. In the original Goodnight Mommy, her character was the one who was placed in danger by her twin sons. According to the official synopsis for the new version, that appears to still be the case:

"When twin brothers (Cameron and Nicholas Crovetti) arrive at their mother's (Naomi Watts) country home to discover her face covered in bandages--the result, she explains, of recent cosmetic surgery--they immediately sense that something doesn't add up. She sets strange new house rules, smokes in her bathroom, and secretly rips up a drawing they gave her--things their loving mother would never do.

"As her behavior grows increasingly bizarre and erratic, a horrifying thought takes root in the boys' minds: The sinking suspicion that the woman beneath the gauze, who's making their food and sleeping in the next room, isn't their mother at all."

Kyle Warren wrote the new script and Matt Sobel (Take Me to the River) directed. Goodnight Mommy will launch globally on Prime Video September 16. The first trailer is below for your viewing pleasure (?!). Don't blame me if you have nightmares.

Do you feel this content is inappropriate or infringes upon your rights? Click here to report it, or see our DMCA policy.
Matt SobelNaomi WattsPrime VideoUS