In CAMINO, Zoe Bell Fights For Her Life 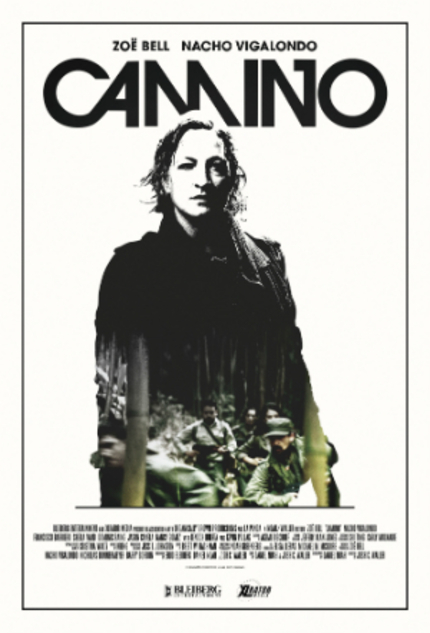 Josh Waller's Camino premiered last September in front of a packed theatre -- or actually, three of them simultaneously at Fantastic Fest in Austin, Texas.

Starring Zoe Bell, Nacho Vigalondo, and Francisco Barriero, Camino posits Bell as an award-winning photojournalist who gets pulled into a job in Colombia photographing freedom fighters. To put it lightly, problems arise when she captures something on film she's not supposed to see, and then she must fight for her life as she's pursued throughout the jungle.

However, Camino isn't just an action film, and Bell's character isn't just chased by bloodthirsty men and women. There are also the memories of her late husband, which help to keep her from giving up when she's been beaten to a green and red pulp. The dichotomy of loss and sorrow against action in this survivalist adventure is what allows the film to work; this isn't some Chuck Norris film (however entertaining those can be). Bell shines here, as does Vigalondo, Barreiro, and supporting actors Sheila Vand, Dominic Rains, and Nancy Gomez.
Of course, the action and the stunts are damn good, as stunts are Bell's forte. While one can see how the story will eventually develop, this doesn't take away from the joy of watching Bell kick asses, particularly in the case of a few certain scumbags.
As a woman, I was relieved to see that the usual rape scene, which has become a tiresome "plot device" in any genre of film, was not played out to its conclusion, nor was it part of the main story. For once, an assault legitimately forwarded the story on to its denouement. Instead, we get a woman who helps other women, and in turn, they take down a liar and probable future dictator. Like a domino tipping, one action is small, but to all, it is mighty. This why Camino works for me.

Originally published during Fantastic Fest in September 2015. The film will open in select theaters in the U.S. on Friday, March 4.

Do you feel this content is inappropriate or infringes upon your rights? Click here to report it, or see our DMCA policy.
Francisco BarrieroJosh WallerNacho VigalondoZoe Bell