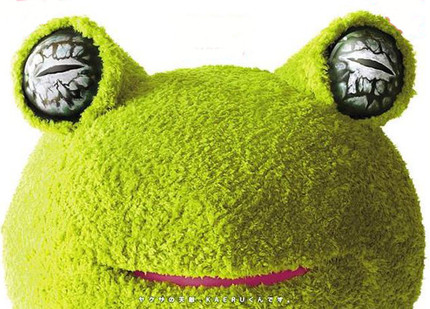 There's a fuzzy green frog headed for Cannes with word that Miike Takashi's Yakuza Apocalypse - poster art featured above - is headed to the massive French fest as part of the official Directors' Fortnight selection along with Jeremy Saulnier's Green Room and Jaco Van Dormael's The Brand New Testament.

Long regarded as the edgiest of Cannes programs, Fortnight certainly appears to be living up to that designation again this year with a broad range of films from both established and new names. Find the full selection below.

"Allende, mi abuelo Allende" (Marcia Tambutti, Chile-Mexico). Tambutti delivers a personal portrait of her grandfather Salvador Allende, delving into his complicated legacy and the clash between his private and public personae.

"Arabian Nights" (Miguel Gomes, Portugal). With a six-hour-plus running time, this three-part epic is likely to clock in as the longest entry in Cannes this year. Filtering Portugal's social and financial woes through the perspective of a contemporary Scheherazade figure, the film marks Gomes' return to the Directors' Fortnight since "Our Beloved Month of August" premiered there in 2008. (Sales: The Match Factory)

"The Brand New Testament" (Jaco van Dormael, Luxembourg-France-Belgium). Van Dormael's follow-up to "Mr. Nobody" is a low-cost, high-concept religious satire in which God (played by Benoit Poelvoorde) accidentally sets off a panic after his disgruntled daughter (Yolande Moreau) leaks the apocalyptic plans he had stored on his computer. Catherine Deneuve also appears. (Sales: Le Pacte)

"The Cowboys" (Thomas Bidegain, France). The Cesar-winning screenwriter of Jacques Audiard's "A Prophet" and "Rust and Bone" makes his directing debut with this drama about a father (Francois Damiens) and son (Finnegan Oldfield) who set out to find their missing daughter/sister with the help of an American headhunter (John C. Reilly). (Sales: Pathe)

"Embrace of the Serpent" (Ciro Guerra, Colombia-Venezuela-Argentina). U.S. actor Brionne Davis and Belgium's Jan Bijvoet star in this drama about the encounter, apparent betrayal and finally life-affirming friendship between an Amazonian shaman (the last survivor of his people) and two foreign scientists. The Colombian director's previous film, "The Wind Journeys" (2009), premiered in Un Certain Regard.

"Fatima" (Philippe Faucon, France). The title of Faucon's ninth feature refers to a Moroccan-born woman who now lives in France with her two teenage daughters, with whom she is barely able to communicate. (Sales: Pyramide)

"My Golden Years" (Arnaud Desplechin, France). Mathieu Amalric reprises his role as Paul Dedalus in this prequel to Desplechin's celebrated three-hour talkfest "My Sex Life ... or How I Got Into an Argument," which bowed in competition at Cannes in 1996. (Sales: Wild Bunch)

"Green Room" (Jeremy Saulnier, U.S.). Saulnier follows up his well-received 2013 Directors' Fortnight entry, "Blue Ruin," with this tale of a band of punk rockers who find themselves trapped in a secluded venue, fighting for their lives against a gang of neo-Nazis. Anton Yelchin, Imogen Poots, Patrick Stewart, Alia Shawkat, Callum Turner and Joe Cole star in the Oregon-lensed thriller.

"The Here After" (Magnus von Horn, France-Poland-Sweden). The Swedish writer-director makes his helming debut with the story of a man's torment after serving time for the murder of his girlfriend, starring Ulrik Munther.

"Much Loved" (Nabil Ayouch, Morocco-France). The leading light of a generation of Moroccan helmers who broke through in the late 1990s, Ayouch ("Ali Zaoua: Prince of the Streets," "Horses of God") spins a social drama about four marginalized prostitutes in Marrakech and their complex relations with their families and society at large.

"Mustang" (Deniz Gamze Erguven, France). Set in a remote Turkish village, Erguven's debut (co-written with Alice Winocour) tells of a 13-year-old girl who tries to break free with her sisters from the rigid destiny imposed on them by their family. (Sales: Kinology)

"Peace to Us in Our Dreams" (Sharunas Bartas, Lithuania-France). A family weekend in the countryside goes awry in this drama from leading Lithuanian filmmaker Bartas. (Sales: NDM Ventas Internacionales)

"Dope" (Rick Famuyiwa, U.S.). One of the breakout hits of Sundance, this energetic comedy-actioner traces the dangerous misadventures of three black teenagers from Inglewood, Calif., who find themselves embroiled in a drug deal. Open Road and Sony Pictures Worldwide Acquisitions are releasing the film Stateside.