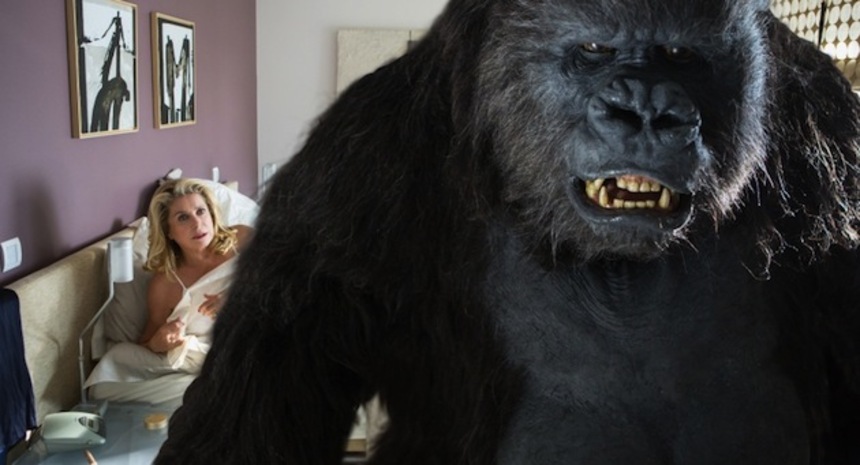 Belgian helmer Jaco van Dormael emerged on the filmmaking scene with Toto the Hero, a life-long spanning story condensed into a 90-minute kaleidoscope made up of flashbacks and fantasies of the eponymous protagonist. Van Dormael´s penchant for epic narratives came into full realization in his third feature, Mr. Nobody, a saga revolving around 118-year-old mortal human (pop)philosophizing on life though three parallel storylines. Notwithstanding the mixed reviews and some fervent cries of it being a failure, Mr.Nobody became a textbook example of pop-arthouse fare rather than a guilty pleasure.
After an exhausting process of getting Mr. Nobody done, the director returns with the less over-structured yet no less charming piece, The Brand New Testament. His penchant for decades-spanning storytelling dominates the first act, trading human lifetimes for more grandiose scale, while milking one´s entitlement to personal interpretation of ontology in the Judeo-Christian tradition with Van Dormael sarcastically (d-)r-econstructing Genesis chapter of the Good Book.
The preludial axiom here negates Friedrich Nietzsche's most notorious quote on the decline of the almighty, and proclaims God alive and kicking, and from that point onwards, the director sticks to marquise de Sade´s accusation of the one and omnipotent as being an asshole with a short fuse.

God (Benoît Poelvoorde) lives at a permanent address in Brussels. From there he carries out his creation based aspirations on a vintage computer, throwing the first specimens of humankind out to roam the deserted streets of Brussels... with occasional giraffe-spotting. Both prototypes, male and female, sport not a fig leaf but a more chic and hip black censorship bar. The almighty seems to be consummated by juvenile acts of sabotaging human lives of all things the most.
Gender inequality rules over his household, with his spouse the Goddess, harnessed to being a silent and ever-obedient housewife, passing the time  bycollecting baseball cards. His 10-year-old daughter Ea (Pili Groyne), like many of her pubescent peers, is fed up with father´s cruel antics. And with the firstborn J.C. (referring to Jesus Christ) nowhere around, decides to scramble the current order of things.
In a zealous effort to revise the New Testament, she ventures on a mission to recruit six new apostles, as times have drastically changed since J.C's. sandals shook the dust on the face of the Earth. As an act of rebellion set against her dad, she pulls an Edward Snowden on daddy´s files, messaging every single soul whose expiration date is coming down to the last second. The incident, reported as DeathLeaks, does not throw earthlings into the consuming maelstrom of chaos and nihilism as it rather prompts a reevaluation process on the meaning of their lives and the so-called true values they try to achieve before the bell tolls.
Van Dormael deploys his signature poetics of magical realism in a prevalent story design. Ignorance is bliss and humans have the tendency to ignore their mortality and rather wallow in a dead-end and comfort limbo of life. Despite the irony and prickly humour, the Belgian director crafts a very humanistic fable circling the the wide-spread notion of life being a constant and often futile pursuit of happiness.
Completely aware of touchy-feely pitfalls and tear-jerking potential, van Dormael approaches the sentiment through the back-alley of mild subversion as the premise of God being a choleric and irritating asshole. The director abandons the epic narrative in favor of a panorama of episodes. Characters targeted by Ea as new apostles take turns revealing their (ill-)fates, while striving to set their lives straight as a homeless man pens them down: An elderly office drone becomes liberated after the revelation of his death date and loses himself in wanderlust; a hitman breaks off a loveless marriage and follows his not so cold-blooded heart; The character played by Catherine Deneuve finds tenderness and affection in the furry embrace of a gorilla she has helped escaped captivity, while a young boy chooses to live the remaining minuscule slice of his life as a girl.
Van Dormael, in tandem with his co-writing partner Thomas Gunzig remodeled what could be labeled as symptomatic templates of contemporary life situations, injecting them with a surreal spin on existential burdens, all the while stirring the sentimental and subversive into a compact mélange. The final product is equally charming, hilarious, sweet and uplifting, elegantly circumnavigating saccharine bathos and melodrama.

The feel-good nature and self-help wink-wink nudge-nudge erupts from the film as a constellation of simple (pop)psychoanalytical sessions, the couch being swapped for a comfy cinema chair. It´s evident that Van Dormael would bend backwards to conjure up a smile in the most depressed face which makes The Brand New Testament more comprehensible as the director´s counterattack on the life's-a-bitch platitude, a negation craftily and inventively elaborated around the core of the life-is-miracle platitude.
Although van Dormael does not achieve the same kind of satirical fervor against religious fundamentalism as Riad Sattouf exerted in Jacky in the Kingdom of Women, and it would be a false expectation, both films correlate on the theme of feminism. Though in the case of The Brand New Testament it´s just a part of a bigger design adhering to the initial idea of pursuing happiness. Yet the postulate of having women in the leading places of religious hierarchies, resulting in peace flooding the earth, is definitely worth the thought.
It's worth noting that Toto the Hero, The Eight Day, Mr.Nobody and The Brand New Testament originated in the mind and came to life under the hands of the very same man that once made living by setting laughing children as a circus clown. The essence of his former career echoes strongly and, in no way whatsoever, wrongly in his current achievements.
The Brand New Testament is then a modern, magical, dreamy and rollicking fairy tale for adults - possessing an inalienable zeitgeist quality.

In addition to playing Fantastic Fest in Austin, Texas this week, The Brand New Testament is currently in theatrical release in Belgium, Luxembourg and France, with Fall festival dates across Europe.