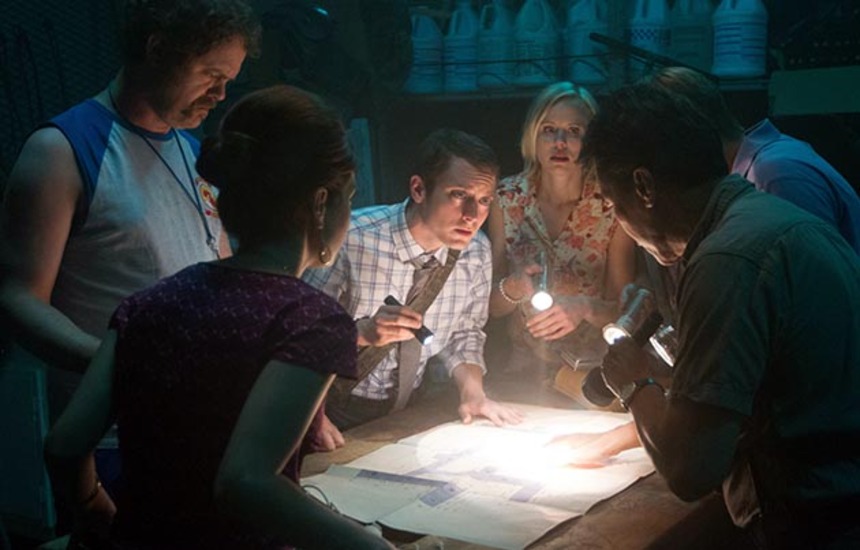 The first official announcement of titles to be screened at Sitges 2015 was made today, and some incredible films will be making their way to the Catalan coast this October. From 9th to 18th of October, Spanish and international genre film fans can sip rioja, eat tapas, and enjoy eagerly anticipated titles as well as waiting-to-be-discovered gems.

A few titles that have received critical praise are Maggie, with an atypical performance by Arnold Schwarzenegger as the father of a teenager (Abigail Breslin) who has contracted a zombie virus, and whom he must protect from the local, vengeful townspeople; Cooties, starring honourary Spanish citizen Elijah Wood as a school teacher who must confront a mysterious disease that has turned his school's young children into ravaging maniacs; and Victoria, the sleeper hit of Berlinale, an incredible film shot in a single take, about a young woman in France who finds herself caught up in a dangerous crime.

On the more religious side, two films present deities and sons. Jaco Van Dormeal (Mr. Nobody) returns with Le tout nouveau testament, a story of God, who must deal with a family who hates him. In Last Days in the Desert, Ewan McGregor plays Jesus, during his days in the wilderness, directed by Rodrigo García. On the not-so-religious side, other big names include Nicole Kidman in Kim Farrant's Strangerland; Farrant's debut feature is a throwback to Australian outback cinema of the 1970s with a fantastic bent, and Vincent Cassel stars in Partisan, directed by Ariel Kleinman.

As always, this year's selection shows the wide variety of tone of the latest in Asian fantastic film, from Takashi Miike's Yakuza Apocalypse to Sono Sion's Love and Peace. And for locally-grown cinema, there is the premiere of Summer Camp, screenwriter Alberto Marini's directorial debut; The Corpse of Anna Fritz by Hèctor Hernández Vicens, and José Skaf's debut film Vulcania.

Full details and more titles are in the press release below. Passes will go on sale on Friday July 17th.

The 48th Festival, which will be held from 9 to 18 October, will be offering essential films that all are highly-awaited by the public, like the dark, melancholic Maggie, directed by Henry Hobson, and starring an unusual Arnold Schwarzenegger in the midst of a not at all adrenaline-packed zombie apocalypse; The Gift, directed by Joel Edgerton, the latest offering from Blumhouse, the new Hollywood horror factory created by Jason Blum, producer of the Insidious saga or The Purge; the powerful Victoria, directed by Sebastian Schipper, the big sensation at the Berlinale, that is leaving its cinematic mark this year and was shot in a single 140 minute long take, starring Catalan actress Laia Costa; or Life, directed by Anton Corbijn and starring Robert Pattinson, a movie that deconstructs the James Dean legend.

On the more wilder, nocturnal side, Sitges will also be screening films like Cooties, another epic zombie story starring Elijah Wood facing an entire school of zombie kids; Deathgasm, directed by Jason Lei Howden, a delirious gore piece shot to the rhythm of black magic and death metal, and Contracted: Phase II, the sequel to Contracted, that was a big hit among the late night audience at Sitges 2013.

Sitges' dual commitment will allow us to show works from illustrious, already acclaimed filmmakers - some who already even have a history at the Festival - and new experiences from young authors who are the Festival's strategic goal and have yielded sensational results over recent years, both nationally and internationally. So returning to Sitges will be Belgian director Jaco Van Dormael, who was a big hit in 2010 with Mr. Nobody and who will now be presenting, in the Official in Competition Selection, Le tout noveau testament, the most talked-about film at the past Cannes Directors' Fortnight, where actor Benoit Poelvoorde plays God himself, father of a family hated by his own people.

Big names will be coming together in the increasingly more consolidated Noves Visions category, with Last Days in the Desert, directed by Rodrigo García, a chronicle of Jesus' (Ewan McGregor) temptations of in the wilderness; Kim Farrant's Strangerland, a drama with fantastic tones in the 1970's Australian cinema style, starring Nicole Kidman; Partisan, directed by Ariel Kleiman, a dystopia with apocalyptic contours starring a magnificent Vincent Cassel, or one of the big winners at Sundance, Slow West, directed by John McLean, a surreal, phantasmagorical western starring Michael Fassbender. In Noves Visions we will also be presenting more experimental films like the mockumentary The Visit, directed by Michael Madsen; H., by Rania Attieh and Daniel Garcia, a poetic and visually stunning science fiction work that was a big hit at Sundance and in Berlin. We will also be screening the radical Korean production Coin Locker Girl, directed by Jun-hee Hano; the return of more daring auteur cinema classics like Michael Almereyda and his peculiar Experimenter, starring Winona Ryder, and Mitchell Lichtenstein, with his supernatural tale Angelica, another example of fantastic cinema with a feminine air from the director of Teeth.

Sitges will also be committed to new authors who are making an important statement in the contemporary fantastic genre, like Jon Watts and his Cop Car, an Americana-style story that's comparable to classics like The Night of the Hunter or Blood Simple. Watts, following his success at Sundance, has been signed on by Marvel to be in charge of refloating the Spider-Man saga. Another 2015 instant cult phenomenon is, without a doubt, Turbo Kid, directed by François Simard, Anouk Whissell and Yoann-Karl Whissell, that brings together the universes of Mad Max and The Goonies with a nostalgic 1980's tone. And check out Ludo, an Indian horror production by Q & Nikon, which is one of this year's big eye-openers, halfway between the purest Lucio Fulci and the most personal Rob Zombie. There will also be room for remakes, in this particular case Mario Bava's legendary film Rabid Dogs, now done by Eric Hannezo, and the controversial Martyrs, directed by the Goetz brothers and produced by Peter Safran and Jason Blum.

The category dedicated to series, Serial Sitges, and sponsored by Fnac, will be including the premiere of the first episode of the second season of Les Revenants, the French series created by Fabrice Gobert, a choral drama with an oppressive atmosphere and an undeniable beauty that explores the concept of resurrection. Les Revenants is based on a French film by the same name, directed by Robin Campillo and presented at Sitges 2004, and has been the inspiration for the North American series Resurrection.

Sitges has always been faithful to the Asian creations of the year, and 2015 has confirmed the rise of Japanese cinema. Names that have been renowned for decades now will be demonstrating they are in great shape, like Takashi Miike with his excellent Yakuza Apocalypse: The Great War of the Underworld, one of the huge sensations at Cannes, where the brilliant filmmaker (Grand Honorific Award winner at Sitges 2013) goes back to his origins and creates a brilliant delirium including yakuzas, vampires and the end of the world. The manga version of the apocalypse is the star of Attack on Titans and Attack on Titans 2, the End of the World, the film adaptation of the big editorial hit by Hajime Isayama that we will be able to enjoy in two parts. In addition, the Anima't category will also be presenting a redux for cinema of the successful anime based on the same manga.

Animation will be very much at the forefront at Sitges 2015. So in this sense, it's important to point out that the Official Fantastic Selection will be including Miss Hokusai, directed by Keichi Hara, the author who dazzled us a few years ago with Colorful and who, with this brilliant film from Production I.G., was just a big hit at the recent Annecy International Animation Festival. Also from Japan will be the classic Shinya Tsukamoto with his terrifying war drama Fires on the Plain or Sion Sono with the comical Love & Peace, two radically opposed ways of understanding Japanese cinema today.

As is customary, Catalan cinema will also enjoy an important presence at Sitges. Added to the previously announced titles, like Segon Origen (Second Origin), by Carles Porta, and El cadáver de Anna Fritz (The Corpse of Anna Fritz), by Hèctor Hernández Vicens, we will also be offering the premières of Vulcania, José Skaf's debut film, a dystopia with a social point of view produced by Zentropa BCN and starring Miquel Fernández and Aura Garrido, plus the latest film from the Filmax factory, Summer Camp, the directing debut from screenwriter and author Alberto Marini, sponsored by Jaume Balagueró. On the other hand, the Noves Visions category will be presenting the premiere of Sacramento, Carlos Cañeque's first fiction work, an irreverent story of insanity that puts an end to his trilogy of pain and pleasure and that completes his previous works Queridísimos Intelectuales and La Cámara Lúcida.

Once again, in the Noves Visions category, the SGAE Nova Autoria section will be offering short films by Catalan film school students. The selected fiction, animation and documentary shorts will be competing for the SGAE Nova Autoria Awards for best screenplay, best director and best original music.

Sitges 2015 will also be including an exhibition on artist Vicente B. Ballestar (Barcelona, 1929-2014), a benchmark from the golden era of fantastic comics and novels.

This year, the Festival's most alternative category will be putting together a selection of feature length films including the outstanding Villa Nabila, by Syafiq Yusof, that tells the true story of some haunted apartments in Malaysia; The Entity, a cross between Paranormal Activity and The Ring directed by Eduardo Schuldt; the Brazilian film based on terrifying urban legends O diablo mora aquí, by Rodrigo Gasparini and Dante Vescio, and Me and my Mates vs. the Zombies Apocalypse, an Australian comedy directed by Declan Shrubb.

As for documentaries, Brigadoon will be screening Jirón, focusing on Mexican filmmaker Carlos Enrique Taboada, the debut film from Christian Cueva. This documentary will also be accompanied by a retrospective on Taboada with the films Veneno para las hadas (1984) and Más negro que la noche (1975), among others. Legendary actress Me Me Lai, star of diverse Italian films on cannibals -like Deep River Savages (Umberto Lenzi, 1972), The Last Survivor and Ultimo mondo cannibale (Ruggero Deodato, 1977)- will be presenting Eaten Alive! The Rise and Fall of the Italian Cannibal Film, directed by Calum Waddell.

The traditional Sitges Zombie Walk, the parade of the living dead that takes over the streets of Sitges year after year, will be on Saturday, 10 October.