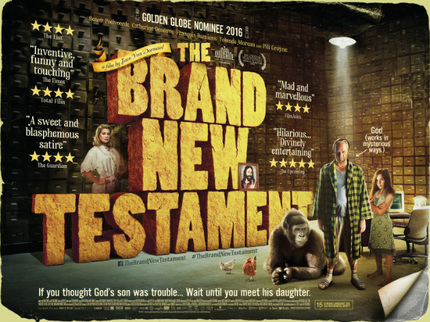 It doesn’t take long, when you’re talking to Jaco van Dormael, to get a sense that he is a director or artist who sees the world in a pretty interesting and eccentric way. Full of gentle, innocuous humour and amusing turns of phrase, you quickly build up a picture of a creative individual whose process of conceiving and producing films is pretty fascinating.

This is certainly what you see in his latest film to reach UK cinemas, The Brand New Testament. This movie is perhaps best be described as an episodic, patch-work quilt of biblical short stories, which is full of kooky little visual techniques and dream-like tropes that means this film will certainly appeal to your inner child, if nothing else.

Except the movie also has a serious dimension too, as it sets about acting like a kind of corrective. In Dormael’s hands, The Brand New Testament introduces a female dimension to the Christian faith, and in that respect this film delivers a playful take on the Holy Trinity (now a Quartet) that is as thought-provoking as it is quirky.

For that reason, ScreenAnarchy caught up with van Dormael at last year’s London Film Festival, where his film screened in October. There we got a better sense of what made him such a lively-minded filmmaker, and we asked him what he felt is driving the resurgence of surrealism or magical realism that many filmmakers seem to be producing so skilfully in recent years.

ScreenAnarchy: Do you think your film fits in with a growing trend for surrealism?

Jaco van Dormael: Probably, but that’s probably because I’m Belgian. I think Surrealism is something Belgians do without even realising it. In many ways it’s a very surreal country. To live in Belgium you have to be bit crazy, otherwise you become nuts. Yeah, it’s a country where you mix everything with everything else in a very dream-like way, and if there are hats floating in the sky, you are not surprised.

Some of the scenes in your film seem particularly poetic, for example, the one where you see a hand dancing by itself on a table. How do you approach creating some of these more dream-like components in your film?

Technically it’s quite a simple, but that scene actually comes from a theatre play I made with my wife and a group we work with. It played here in London at the Barbican, actually. I think it could be best described as an ephemeral film called “Kiss and Cry” and it was made entirely by hands acting out on a kitchen table for an hour and a half.

So all the characters in it are only hands, and there was one particular bit of choreography from this film that I found very beautiful, so we took that bit and inserted it into this film to act as the dream of a woman who has lost one of her hands. The left hand is returning and meeting the right hand. But yeah, with special effects that was quite easy.

What do you think it is that draws you as a director to using these kinds of special effects?

Plus sometimes it would be too expensive to do things like make a holiday caravan set in Spain, so we would just be like, “okay, let’s try putting toys on sand.” I really like the effect it has actually. Even if the viewer knows it’s not real, they still stay submerged in the film’s style of storytelling. And by showing that it’s not believable, sometimes you actually get sucked into believing it even more. You just accept the style, and still get involved in the story. You will believe it, even though you know it’s a trick.

Do you think there’s anything in particular in our contemporary culture which has made those kinds of surreal illusions more popular?

Our world is becoming one that is more and more virtual, so perhaps we’ve started to think that reality is what we can see on a computer or on the TV or the big screen. Perhaps as a result Surrealism is beginning to feel more real to us again.

You talk about this kind of surreal process of mixing which Belgian films also go through, do you think that has enabled Belgium cinema to flourish at the moment?

I think it has always been quite promising. We don’t really have an industry, though. I think that makes us poor and rich at the same time. Certainly there are no audiences out there waiting for our films or an industry that says, “we need more Belgian films to put on TV or screen.” Nor is there this big round pipe in the industry that takes our films directly to audiences.

Often our films will be flower or triangle shaped anyway, so they won’t enter into the pipe, and sometimes that means they end up just getting stuck somewhere. But sometimes Belgian films do get through too, it’s just when they do it’s not because they’re done to fit a particular pipe, because there is no existing industry, and I guess that can make our films quite original or different.

So you wouldn’t say that you were fitting the style of THE BRAND NEW TESTAMENT to a sort of French style? The sort of magical realism of AMELIE or the Surrealism of some of Michel Gondry’s films?

There are elements of that, I guess, but then there’s also a little bit of things like Monty Python or a little bit of Philip Kaufman too. I mean perhaps it is French too, but I don’t know – I think I would say that my film is one that cannot be found in the catalogue [chuckles].

But do you identify yourself specifically as a Belgian filmmaker?

Not really, it’s just because I live there – and Belgium just has lots of different kinds of cinematographies, and lots of different cinematographers living there anyway. It’s just this sort of crossing point for a lot of different things and cultures. That’s what I like, though, because there’s never a “good way” or a “bad way” of thinking, everybody just thinks the opposite to each other and it doesn’t matter.

I think you can definitely see that in your film. The idea to set God in Brussels must also have been quite a fun one. Did you intend your story to act like a kind of satirical allegory for the European Union?

You know, it was only once I had finished the film that a friend from Portugal turned to me and said, “of course, Brussels is the place where they create all these annoying rules.” That was probably the first time I thought of it that way.

For me, it’s just because I live in Brussels and sometimes there you see “God exists” written on posters and stuff, but I don’t have his phone number to prove that. So it was fun to imagine it instead. There’s also this beautiful quote from Woody Allen, where he says, “if God exists, I suppose he has a good excuse.” I guess I wanted to explore that.

But yeah, it just seemed funny for God to exist in Brussels, and not in a beautiful city like Venice or Paris. The same with the fact that he was responsible for creating something not so beautiful, but instead rainy and grey, where he put people reproduce themselves but also a little bit to annoy them.

Were you ever worried about how this film might be received in certain religious communities?

I just didn’t worry about it. [Chuckles.] I just always held onto the hope that people do have a sense of humour. Admittedly sometimes they don’t, we can see that in the world around us; but I haven’t been kidnapped by twelve angry monks yet, so I think I’ll be okay.

Do you think there are aspects of religion from the world around us that heavily influenced your depiction of God?

Yeah, I think when we started to write, it was at the same time that in France there was a march against marriage equality, with people coming out with crosses and marching in the street. I think it was then that I remember having this feeling of, oh my God, that is a dark god. Then when we were editing the film, there were the attacks on Charlie Hebdo, and I thought, oh my God, that’s a dark god then too. These are two gods whose path I would prefer never to cross. These are frightening gods, like the God you find in the Old Testament.