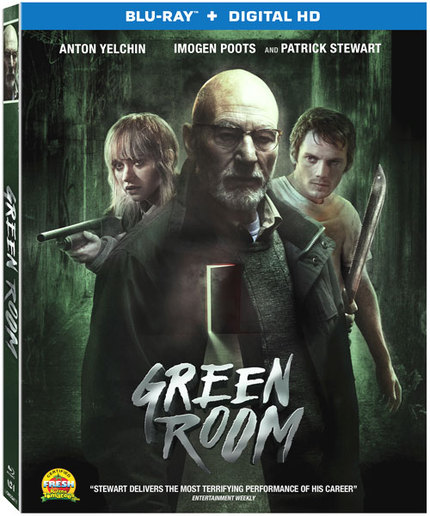 Jeremy Saulnier's Green Room is one of the best reviewed films of the year and we've teamed up with Lionsgate Home Video to giveaway a copy of the brand new Blu-ray to a ScreenAnarchy reader! In case you've been living under a rock, here's a basic idea of what the film, starring Anton Yelchin, Patrick Strewart, Alia Shawkat, and Macon Blair, is about:

After witnessing a shocking crime, a young rock band is unexpectedly thrust into a life-or-death battle to escape the clutches of a diabolical club owner (Stewart) and his ruthless henchmen in this white-knuckle thriller.

Ryland Aldrich at Cannes 2015 and was full of praise:

Awesome really is the best way to describe Saulnier's filmmaking style. Smart, assured, and clever are all accurate as well. Green Room is all of those things in spades and proves that Saulnier is one of the most exciting genre directors around.

If you want a chance to win this disc, you're going to have to tell me your desert island band. I'm not going to judge you (much), but I would like a bit of justification, so make your case! Send over your desert island band of choice - along with your name and US address - to josh [at] screenanarchy [dot] com and I'll pick a winner next Tuesday, July 19th!

Do you feel this content is inappropriate or infringes upon your rights? Click here to report it, or see our DMCA policy.
Anton YelchinJeremy SaulnierLionsgatePatrick StrewartThe Green Room