Check Out The New Trailer And Poster For Miike's YAKUZA APOCALYPSE: THE GREAT WAR OF THE UNDERWORLD 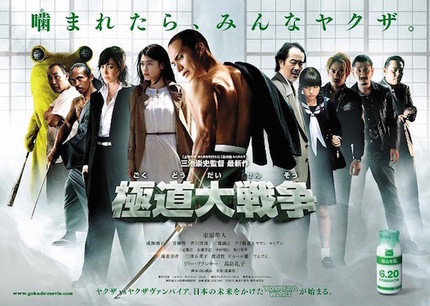 A new one-minute trailer for Miike Takashi's batshit-crazy-sounding action-thriller Yakuza Apocalypse: The Great War of the Underworld (極道大戦争) has gone online today. With plenty of fresh footage and a peek at some of the wild set pieces, the action-heavy trailer serves as an introduction to the to the various characters and the actors who portray them in the film. It also offers a quick glimpse of the mysterious Kaeru-kun, apparently one of the deadliest thugs the underworld has ever known. The trailer features the film's theme song "Bite" by Japanese rock band Knock Out Monkey.
Miike stated in an interview last year that he's going back to his roots with this tale of a yakuza who turns into a vampire to help his boss take revenge against an enemy crime syndicate. Judging from the film's trailer, the cult director has created something that his devoted fans will really appreciate.
Scheduled to open on June 20th, Yakuza Apocalypse: The Great War of the Underworld will be released in Japan by Nikkatsu. The distribution in Europe will be taken care of by Backup Media, a Paris-based film consultancy and investor, while U.S. sales will be done by LA-based XYZ Films.
Tweet Post Submit