Destroy All Monsters: R-Rated DAREDEVIL For An R-Rated World 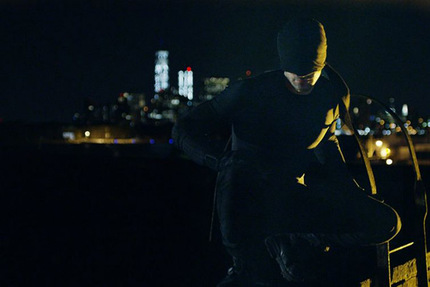 Some spoilers for Marvel's Daredevil.

On the weekend I afforded Marvel's Daredevil a status I've previously only given to new-released Harry Potter books: the "I am consuming all of this before I do anything else" thing.

It's the fastest I've ever clocked through a TV show. I could have done it even faster, but once I was a couple episodes deep in the Marvel/Netflix series (initially adapted by Drew Goddard, before Steven S. DeKnight took over as showrunner) and was realizing, along with a lot of other people, the sheer strength of the content, I started slowing down.

Each episode of Daredevil is its own, viable unit, in addition to being a chapter in a 13-hour movie. As such, each episode richly rewards being observed on its own terms, as well as a part of the whole.

Marvel's Daredevil makes maximum use of its format. It's violent, potty-mouthed, and adrift in a sea of blood and hard liquor; it meditates on faith more honestly than most series, both secular and not; and it debates morality while slyly equivocating on how "good" and "evil" actually work. It's one of the best pieces of work Marvel Studios has delivered thus far, and lays the groundwork for a long and profitable run of similar Netflix series to come.

One of my former Facebook friends described Daredevil in general as "Dollarama Batman," but above all, the 13-episode order lets Marvel's Daredevil do something Batman Begins could only hint at: it's a focused study on just how fuckin' ridiculous being a vigilante actually is.

I don't mean this to imply that Daredevil (or for that matter, Batman Begins) is silly or inherently preposterous; only that the Netflix series has a ground-level realism - or as much "realism" as can be borne in a series where toxic waste confers super-senses rather than, say, cancer - about what the process of fighting injustice from the ground up would actually be like.

I don't invoke Batman Begins lightly. (The "Christopher Nolan = dark and gritty" trope in online film writing has, I think, seen its day. A while ago.) But that movie also took on the comic book superhero by way of an attempt by its protagonist to strategically, individually disrupt systemic injustice.

Nolan's Bruce Wayne designed Batman as a symbol, intended to paralyze the fear-driven bad guys of Gotham City. Batman was a reagent introduced into a broken Gotham to kick off a ripple of change that would transform the whole. The Dark Knight and The Dark Knight Rises, afterwards, were akin to Breaking Bad's lesson in transformative chemistry: once the reaction started, even Bruce Wayne wasn't able to stop it.

Daredevil's Matt Murdock has less conceptual chess on the brain than an innate need to beat the shit out of people, but the results, at least in part, are largely the same: he disappears into Hell's Kitchen at night. He wears black. He uses ninja skills he learned from a ninja. And he is attempting to push back against a profoundly corrupt system, in an effort to effect change and help the people caught within it.

It's an astonishingly violent show. This helps. This underlines a key theme with a smear of blood: after thirteen episodes of this thing, it begins to feel less and less like a series of action sequences, and more like watching a nearly-powerless single idealist beat his head, fists, and heart against an unmoving brick wall.

The series has exceptional fight choreography, but the fights are made morally significant by the fact that they are just so visibly, viscerally damaging. Bones break, jaws shatter, blood leaks from holes. While it's somewhat implausible that Matt Murdock would be able to stand upright by Episode 3, the series otherwise plays as fair as possible with the idea that the lack of an Iron Man Mk. VI or a magic hammer means a hell of a lot of injury, for all parties.

That rings true. It's amazing watching the series trundle along, and seeing just how fundamentally ineffective Murdock's entire approach ends up looking. Because, it would be, wouldn't it? One man in the streets, in modern-day New York? Would anyone even notice?

Sure, this is a Marvel Cinematic Universe property, so by the end, Daredevil will have to have achieved some kind of measurable (both physical and legal, because this is Daredevil) victory against his nemesis, the Kingpin.

But on a larger level, with the Kingpin representing all of the structural inequity of America in a single, towering figure - kind of a big business, broken government, personal entitlement Supercut - Daredevil himself begins to represent the opposite, all the grassroots idealists across the country who, a few years ago, might have been Occupy Wall Street or something similar, and now can't even organize themselves that much.

The Kingpin is perhaps the most critical of Daredevil's many conceptual gambles. Supported by a flawless turn by Ayelet Zurer as his love interest - which, in and of itself, makes the entire Kingpin presentation a deft shade more complex than any MCU baddies thus far - Vincent D'Onofrio's finely-calibrated performance unspools into deeper and deeper meaning as the series progresses.

D'Onofrio plays the Kingpin like an aging, beleaguered Roman senator, albeit one with a long-practiced, but noticeably malfunctioning, sense of how to simulate the behavior of a human being. His backstory is laid bare in hammy flashback fashion, but the outcome of that violence - that entire way of thinking - ripples through everything Wilson Fisk does in the present day.

D'Onofrio is consistently playing three levels in his every scene, an effect which becomes more and more unsettling as the series moves along. There's a broken kaleidoscope inside this man-boy, and even he doesn't seem to know what the colours mean.

And though he does make more than his fair share of bumbling mistakes, the Kingpin represents the sheer mass - literal and proverbial - of bent, hungry power aligned against Murdock in everything he is trying to do. When Murdock finally meets the Kingpin in Episode 9, "Speak of the Devil" - both out of costume, and later in it - Kingpin beats the holy shit out of him. Easily. Handily. Because: of course he would. Look at him! Listen to him!

That episode, "Speak of the Devil," has Matt pondering the existence of a literal devil with his Catholic confessor, in one of the series' many homages to the great runs of Daredevil in the comics. It contains all the frustration of a broken idealist, looking up at an overarching system of control that seems entirely undefeatable.

Both characters in that scene take the view that the devil is tangibly real and walks the earth, but the series runs in the opposite direction with it: this is a 13-episode study of how malaise spreads, as an idea and a system of behaviours, from one act to another and one person to the next, until the whole community has been polluted and consumed.

But Daredevil, the show, doesn't feel like a show about winning, nor does it ally itself with the childish idea that standing up for what one believes in is, itself, a path to righteousness. Instead, its characters stand adrift in a sea of their own choices, compromised and alone, cobbling together what victories they can in the moment. And the city, around them, does not change.