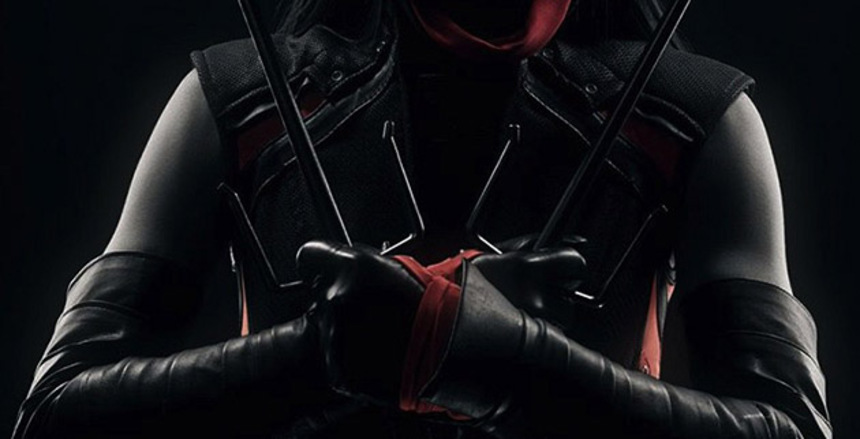 There are problems with Marvel's Daredevil. I am an unabashed fan of the show - I have called its first season the best thing Marvel Entertainment has ever done, and its newly-released second season easily lives up to the benchmark - but I won't deny any of the series' more problematic aspects.

Some of these it comes by honestly; some, the television series seems to tilt into, alchemically fusing source material with interpretation in ways that just beg to be picked apart.

In the former category are the show's racial politics. They, like the Asia-fascinated 1970s and 80s comic books they derive from, are teetering on the brink of their stale date. (Which is a fancy way of saying: I'm saving that column for the inevitable clusterfuck of Iron Fist.)

In the latter category, I'll put Netflix's Daredevil's aggressively, occasionally myopically, masculine nature. Holy maleness, Batman! It's Daredevil! Or more to the point, it's the (pathetic?) male fantasies that Daredevil envisions, instills, and only once in a while, transcends.

As soon as I was done watching Daredevil's second season, I spun up Jessica Jones a second time, as a palate-cleanser; I don't think I realized at the time just how much of a corrective Jones had been to what has been an almost wholesale sausage festival in the Marvel Cinematic Universe. Jessica Jones gives complexity and interiority to almost as many female characters as the rest of the MCU combined.

Which isn't even to rag on Daredevil. If the two series form a compelling yin/yang, it's likely as unintentional as it is effective. But boy, Daredevil is a dude's worldview, through and through.

Dude Fantasy #1 arrives in the form of this season's principal villain, the Punisher. He's reasonably well captured by Jon Bernthal, and the character's use here is about as good as it's ever been... which isn't a particularly high bar, because not only has the Punisher pretty much never worked on screen (yeah yeah, Dirty Laundry), but he's a phenomenally stupid idea for a character.

OK, maybe not "stupid." But certainly "limited." As a knowing hyperextension of the kind of fascist, vigilante justice that is practiced by (on the DC side, better known) Batman and (on the Marvel side, better executed) Daredevil, the Punisher has utility in the moral universe of a comic book superhero story.

It isn't the concept of superheroes itself that the Punisher problematizes; it's the single-man judge/jury/executioner approach, which forms the spine of Daredevil. Fascism is appealing because of the degree to which it eliminates from one the need to see context and complication surrounding any argument. (Just look at what's happening in the United States, right now!)

The Punisher, though, seems to be appealing to fanboys for exactly the same reason: supplied with a motivation built on the suffering of others (the "tragic" backstory, a word whose use only extends as far as the nearest dictionary), the Punisher's need to check and balance his own sociopathic impulses is conveniently excused.

It wouldn't be so galling, if everyone weren't tripping all over themselves to point out how terrifying and icy-cool the Punisher is, as though buying a t-shirt with a skull on it wasn't anything other than an adolescent's overcompensation for the un-admitted weakness of his still-in-development testicles. The first three episodes of Daredevil Season 2 are incredibly bad, if only because they're so besotted with fanboy heart-eyes about the Punisher that they sort of forget to tell anything resembling a compelling story - about him, or anyone else. Cribbing shamelessly from The Terminator, those episodes seem to exist only to tell you that this guy exists, and hey, wow! Isn't he a badass!

Things improve significantly when the series lets Bernthal out of his cage to actually, y'know, act; or at least, add some dimension to the role, even if the show (and Nelson & Murdock) then disappears down a rabbit hole trying to prove beyond a reasonable doubt that the Punisher might actually be an okay guy.

(If there is presumptive uncertainty about the Punisher's status as a wrongdoer, composer John Paesano ain't feeling it. His motif for the character is as unbalanced and destructive as Hans Zimmer's theme for the Joker in The Dark Knight.)

But the Punisher's slack is more than taken up by the arrival of Elodie Yung's Elektra, who all but singlehandedly saves the back half of the season. ("All but" singlehandedly because a rising ride raises all boats: Elektra's presence vivifies everyone around her, including, and most importantly, Charlie Cox's Daredevil.)

Now, Elektra is as much of a patent male fantasy as the Punisher is. If the Punisher is the promise of a self-righteously amoral outlet for might-makes-right masculinity, Elektra is a fantasy femme fatale who fights and fucks her way into fans' hearts, and does it all in a size 2 costume.

Except, Yung's Elektra is so good - and for the most part, well written - that she kind of gets away with it. She's no one's sidekick (at least, not really), and if the presumption going into Daredevil Season 2 was that the Punisher would emerge as the breakaway character and would be anointed with a spin-off, I'm hereby joining the chorus of viewers stumping for Elektra to jump the line and get hers first.

Yung's Elektra is not particularly on-model for the character from the comics. She comes across very differently here. Still a ninja assassin from a wealthy, politically connected family, she's played in Marvel's Daredevil with a British accent and a party-girl attitude by a half-French, half-Cambodian actress (making her, in the queasily-ambiguous manner that white audiences seem to prefer, the second non-white female superhero in the Marvel Cinematic Universe, alongside Chloe Bennet's also half-Asian Agent Quake).

Elektra goes impressively nuts as the season goes along - or, more charitably, remains the dedicated shadow warrior that Stick made her, rather than trying to mediate or change or nature to suit her male partner (Murdock, who does plenty of mediating of his own).

It's this latter part that makes Elektra as powerful a character as she is, and it lines directly into the male fantasy at the heart of Daredevil. In a season that seems hell-bent on coming to terms with its three principal characters' morality, Elektra opens the door in the season's final hours for Matt Murdock to just accept who he is and keep on keepin' on.

It's probably not going to be a thread that the series can carry into its third season - Matt's death's-door confession that Elektra brings to life a dark part of him that he can't do without is not the sort of apotheosis that guilt-ridden Marvel superheroes are allowed to get away with for long - but it would be more than enough to carry Elektra through a year or two of stories of her own.

And since this is, after all, Daredevil's show, it's worth looking at how the fantasy of Elektra supports another impolite urge at the heart of its male hero: Elektra is that perfect girlfriend who truly sees her man, even the parts he doesn't want seen; who enables the things about himself he knows he shouldn't want or enjoy, but does anyway. That's her role in this story - but Yung's performance is worth a story of her own.

If she must be the standing vestige of a ridiculous, Frank Miller fantasy about a ninja girlfriend who goes to work in a bikini, the Elektra on this season of Daredevil has shown the potential to be as much of a critique of that psychology as she is an example of it. After all, if the Netflix Marvel series in general have demonstrated anything, it's a willingness to treat directly with the ambiguity at the heart of the whole superhero proposition.

What if Elektra is the first Marvel character to stand up and say, "yeah, I'm exactly this person - and that's fine?" We've done brooding, self-loathing heroes to death. Elektra's like Black Widow without the "monster" speech. Let her loose in her own adventure and see what she can do.