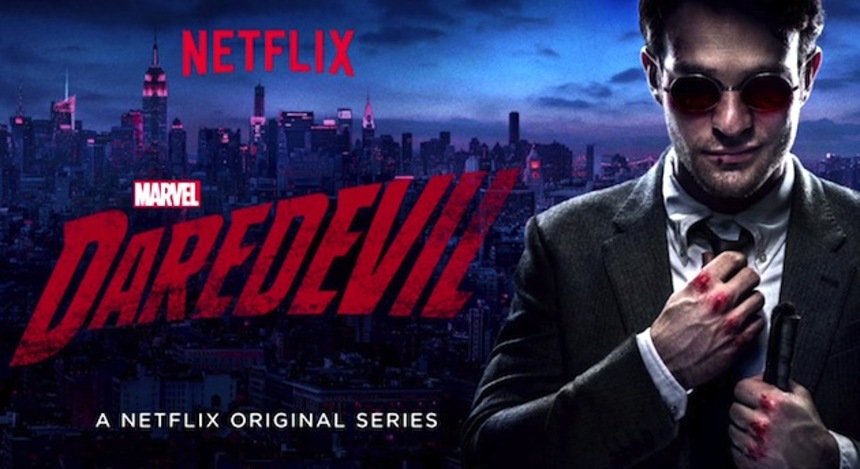 Leave it to the Man Without Fear to take the Marvel Cinematic Universe to daring new heights. Even if that's just mostly to the top of a five story walk-up in Hell's Kitchen.

Marvel's Daredevil is the first of the so-called street-level hero shows from The House Of Ideas and Netflix. Like the long overdue return of an old friend who's been out of town for years, it's utterly refreshing merely because it is also so wonderfully familiar.

Fans of ol' horn-head's often herald run in the Marvel Comics Universe should breath easy then. As many were expecting from the hype machine that lobbed words such as "gritty" and "dark" our way, the brunt of the show's story takes its cues from Frank Miller's classic early 80s run of comics, updating it for the current post-Battle Of New York MCU.

For those less familiar with the property, or just vaguely from the much-maligned 2003 feature, of which there is nary a whiff of here, I present to you the basics:

As a child, Matt Murdock (Charlie Cox) was blinded by some nasty chemicals in an accident. This heightens and hones all his other senses to near super-human levels. Haunted by the ghost of his father, low-level boxer Battlin' Jack Murdock (John Patrick Hayden), and fueled by a Catholic-bred sense of guilt and justice, Matt grows into a man with two distinct, if intersecting paths. By day, he works as a lawyer with his partner Foggy Nelson (Elden Henson), righting the wrongs for the locals of New York's Hell's Kitchen neighborhood. By night he trapezes through alleys and over rooftops, a masked vigilante, bringing the hurt to the seedy characters of the city's underworld.

Because thanks to the exploits of the Avengers and their enemies, this era's NYC is in disarray, an urban circus turned upside down, with Hell's Kitchen reborn as a crime addled ground zero for the future kings of New York to battle in.  From a corrupt police force, to low-life thugs, and a trifecta of international crime rings, everyone wants a piece of Matt's home turf.

The reclusive Wilson Fisk (Vincent D'Onofrio), a local boy turned brutish billionaire businessman sees an opportunity to gain control of the criminals; to lord over them, to use them to his advantage, then dispose of them when he sees fit. For a city like New York, Fisk believes, is a crumbling, dying animal. And sometimes, as our Kingpin of Crime states, things have to die to be reborn. He sees himself as instigator, cleanser and savior all in one. This kind of big picture thinking plays right into a misguided-humanitarian angle, and is about as classic of a take on Fisk as you can get. Along with his tragic origins, these good intentions paint him as the most well-rounded villain currently in the MCU. For while Loki may beguile us with all that sparkling charisma, poor Wilson has our sympathy.

But make no mistake, Fisk is not to be reckoned with. Nearly no man shall speak his name without getting his skull smashed in. So it's up to hell-bent Matt to put the pieces together, exposing Fisk's shady dealings to the world, and bringing such a monster to justice. Yet as any good story goes, it isn't as black and white as all that.

Developed by Drew Goddard, with show running duties going to Steven S. DeKnight, Daredevil comes out of the gate a bit clunky in the dialog department, with questionable, albeit eventually alleviated depictions of violence against women. The rest of the show is so sure footed in the look and feel of this ever-engrossing world, that a few episodes in and most of the rough patches have been ironed out. By the time we catch our breath following the pulse-pounding midpoint, it's clear the creators have something truly marvelous on their hands. 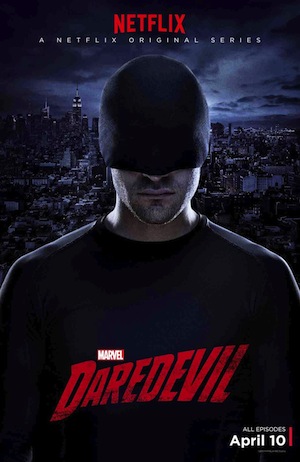 Goddard and DeKnight, both TV vets with work spanning from Buffy The Vampire Slayer to Alias, Lost and Spartacus, infuse their street-wise odyssey with just the right amount of noir and pulp, encasing it in byzantine and involving crime and civic problems ala The Wire, with fight choreography that should have fans of The Raid jumping with glee. And, of course, it has that patented Marvel touch of levity with brevity. For the world of Daredevil may be harsh and violent, brooding and Machiavellian, but more than that it is soulful, passionate, kind-hearted, and especially in its darkest moments, all too human. I mean for God sakes the show actually has some legitimate things to say about the shadow of abuse and neglect in families, the subjugation of the poor and working class, and features engaging perspectives on morality and ethics that evolve as the story goes along (Yes, it's not just some hero's decree set in stone from the word go).

For those worried about Matt's skin-tight black get-up he does indeed spend most of the show gallivanting around in, do not fret, it looks far less hokey in action. As to his abilities themselves, despite doing a splendidly succinct origin as the opening scene, the writers take their time in dolling out how they work, usually sticking to the show-don't-tell angle, while actually leaving some room for our own imaginations to fill some of it in, which is quite refreshing.

On the other hand, fans hoping to see from Matt's POV (sometimes visualized in the comics as a sonar-like world of red ripples), may be disappointed here. When talking to one character about how he visualizes things, Matt describes it like an impressionistic painting of a world set on fire. We then briefly glimpse this, which adds quite the bit of Oomph to his pathos, no doubt. When it comes to such things though, I appreciate this less-is-more approach, for Daredevil is a show that does not really need to be beholden to effects, even good ones, to relay our protagonist's state of being.

Daredevil is perhaps the first streaming era show I've encountered that feels legitimately, intelligently structured for a long weekend viewing. It's a show you want to savor a little bit, like reading a good novel or a couple of trade volumes of comics, rather than outright binge on. And considering the experimental, growing-pains moment we are at in serialized show development -- Reassessing, reshaping the norm for act breaks, cliffhangers, climaxes, pacing and character arcs sans commercials -- this is no small feat.

Because when you take time to build characters the stakes really matter. When you get to spend the quiet moments, the small, tender ones with people like Matt Murdock, or violence victim turned civil rights champion and people's detective Karen Page (Deborah Ann Woll), and certainly William Fisk, you feel every blow and every twist, however big or small. That's inside-out world building. From the heart outward. It's where we go on a true journey with our characters; one where the landscapes traversed become richer, more involved and expansive as we move along. Thanks to a splendid writer's room, and an on-point cast led by the battered charms of Charlie Cox, and quite the powerhouse performance from Vincent D'Onofrio, Daredevil's got all that. In spades.

You see, while I adore plenty of Marvel Comics for these very reasons, most of the Cinematic takes have felt to me passably fun at best, and frankly kinda airy. Now I'm not asking to sit and eat lunch with Captain America, or watch Tony Stark drown his sorrows on the big screen, but I am wanting a bit of breathing room from earth-shattering battles and conspiracies. I want to feel what these characters feel in this extraordinary, confounding universe on a human scale first and foremost, because then we can be in true awe of both the macro and micro, with all the nuance and gravitas in between. And to do that, you have to allow these characters the time to consider their paths and question their actions in something more akin to everyday living.

Leave it to Daredevil then to be the adaption to change all that by leaps and bounds, bringing it right down to earth while never abandoning that wonder (and even, if just peripherally this season, the mystical). Because, yes, it's kind of a no-brainer that stories which got their start in serialized comics sure as hell have the chance to work next-best in serialized TV over feature films.

All-in, Daredevil is not just the first good Marvel show, it is also the best thing the MCU currently has going. Now that bar may not be all that high to clear, at leas by my standards, but make no mistake: I am darn happy we're finally in clear grasp of greatness within this universe of characters. Heck, maybe we needed the dozen or so movies, growing pains and all, to truly resonate such depth.

To put a fresh spin on a familiar Gen X saying then: "I want my MTV".

The first season of Marvel's Daredevil (all 13 episodes) is now available to watch on Netflix. 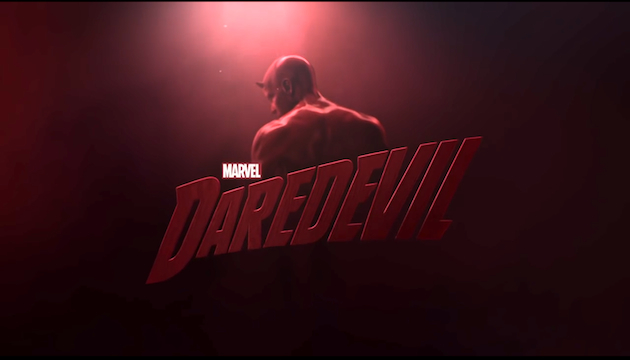 Do you feel this content is inappropriate or infringes upon your rights? Click here to report it, or see our DMCA policy.
Charlie CoxdaredevilDeborah Ann WollDrew GoddardMarvelNetflixsteven s. deknightVincent D'OnofrioElden HensonActionAdventureCrime