Destroy All Monsters: In Light of WONDER WOMAN, It's Time To Reconsider 1984's SUPERGIRL 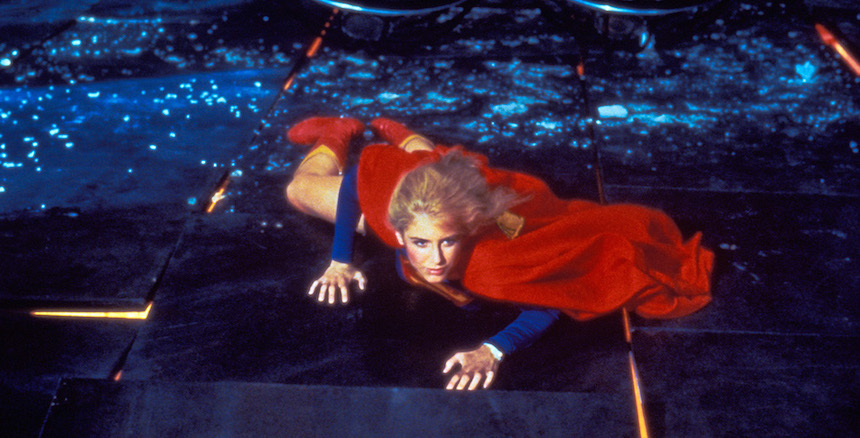 Wonder Woman continues to dominate the box office both domestically and abroad, adding a disproportionately low second-weekend drop (for this genre, the best since Batman Begins) to its list of achievements. It's weird and sad to keep condescending to the film as the ultimate in superhero movie edge cases - "look, a movie about a woman can make money!" - but media's incessant need to compare like against like leaves few alternatives in the desert-like "female superhero movie" sub-genre.

So, I might as well throw my hat into the ring, and point out that most of the commentary around Wonder Woman only seems to have cultural memory going back to the Catwoman/Elektra days, and in some cases, Tank Girl or Barb Wire might get thrown in for a bit of renegade cred.

All of which ignores the fact that the first female superhero movie was released in 1984, and was called Supergirl.

Like the others in the very slim "before Wonder Woman" canon, Supergirl is largely considered to be an outright creative misfire, except, I dunno - it sorta rules? It's cheesy and silly the way adventure movies for families were back then, but I grew up with this stuff and can assure you, it's far from the worst offender. Why has it been forgotten?

1984 was the epicentre of what we nominally consider to be modern movie pop culture (Gremlins, Romancing the Stone, The Karate Kid, Indiana Jones and the Temple of Doom, Ghostbusters, The Terminator, A Nightmare on Elm Street, Beverly Hills Cop, Star Trek III: The Search For Spock, The NeverEnding Story, Sixteen Candles, Police Academy, Purple Rain, The Last Starfighter, Revenge of the Nerds, Spinal Tap, Splash, Repo Man and The Muppets Take Manhattan) so maybe it's permissible that Supergirl - which serves as a kind of non-starter Cinematic Universe entry for the Richard Donner / Richard Lester Superman era - got left behind. This summer of all summers, though, it deserves another look.

I'm one of the handful of people who doesn't consider Superman II (in either incarnation) to be particularly great, so I put Supergirl right behind Superman: The Movie in my list of the original five Superpictures. (Superman Returns, of course, is better than all of them.)

Supergirl gets a pile of things wrong, and some of its finer aspects can only be enjoyed as camp (but more on this in a moment). Still, it does as advertised: it puts a teenaged girl in the Kryptonian red and blue, and has her save a world that persistently underestimates her because she is not her big, male cousin. In case the text is too "sub" for anyone, it starts as all things should start: with her kicking a would-be sexual assailant in the balls.

Well, not really. The first act has a lot more to do with the threat to Argo City and the loss of the Omegahedron, sending Kara Zor-El (a delightfully demure Helen Slater, who develops into strength in pace with her character) to Earth. The would-be sexual assault is Supergirl's first encounter with the people of our planet, once she's emerged from a Kryptonian space egg fully costumed (no, it doesn't make sense).

She immediately spends a few moments and one major orchestral sequence delighting in her newfound ability to fly. Supergirl is full of such grace notes, doting on Kara Zor-El's transition to empowerment more directly than Superman did with Clark (whose maturation into superheroic skill takes place largely offscreen, in a 12-year time jump in the Fortress of Solitude).

But when Kara gets to National City, she rapidly discovers that people suck, and men-people, particularly, are the worst. First, the two truckers come after her (one played by Matt Frewer, who when questioned about why he is attacking Supergirl, replies lamely, "it's just the way we are" - which I'd argue with, except, he's kinda not wrong). Then, one of her professors at Midvale Academy is a Severus Snape wannabe who delights in dismissing the possibility that any student at this all-girls school might be able to keep up with his grasp of mathematics. (Kara can outpace the computer, let alone the professor, at complex calculations.)

And then there's Ethan, the love interest, who is also maybe a stalker.

Ethan, played by Hart Bochner (who would later give one of the finest sleazeball performances of the 20th century, essaying the role of Ellis in Die Hard), is where my esteem from Supergirl derives some of its deepest strength. As a gender-swapped dullard love interest from a 1980s action movie goes, Ethan couldn't be done better in a million years of trying. He's dumb as a bag of hammers, exceptionally talented at getting him into jeopardy that wouldn't vex a 4-year-old (how, exactly, does one get stuck in a bulldozer?), and, literally most importantly, is astonishingly beautiful.

I mean, that's the point, right? Who cares what a ninny the love interest is, as long as he/she is spectacularly visually attractive to the movie's dominant gender? James Bond was off dallying with Carole Bouquet and Tanya Roberts in this timeframe; Bochner's Ethan is something the 007 movies could never incorporate: a Bond Boy.

Supergirl never makes a particularly credible case for why Kara would be interested in Ethan, except that she's never done kissing before. The particularities of Kryptonian sex education are left out of it altogether, although Kara is a studious girl, and one suspects she's familiar with the theory, if not the practice, of sexual activity. Naturally, once Kara's had a kiss from Ethan, she wants to do more of it, and maybe the specifics of who she's doing it with don't matter as much. I'll call that a fair play in the gender-swap category, too.

Ethan follows Kara around like a puppy, to the point where it gets unsettling. There's some falderal about a love potion which is patently unnecessary, given the broadstrokes male entitlement on display from the other men in the story, up to and including our Special Guest Star, Marc McClure's Jimmy Olsen - who turns up in National City to woo Lois Lane's teen cousin by ordering her around some. Ethan doesn't really take no for an answer either, which makes him sort of a creep, except Supergirl could literally flick him into the sun if she wanted to, and (per the above) probably doesn't for no reason other than that she wants more kissing.

Plus, Ethan's up to his neck in trouble with the villain of the piece, who also wants to sleep with him because he's so pretty, and is the reason I mentioned Supergirl's camp value earlier:

Yep, following her Bonnie & Clyde buddy Gene Hackman's lead into the Superman franchise, one of the greatest actresses in American cinema turns up in Supergirl as a carnival-show huckster and wannabe sorceress who, almost accidentally, becomes the most powerful woman on the planet. She's accompanied by Brenda Vaccaro, loudly stealing every moment of every scene she is in, as this movie's answer to Ned Beatty's Otis from Superman 1, playing Selena's stooge, Bianca.

On one level, I sincerely respect it. Dunaway's badass enough to almost pull it off, and although the script drops a few key beats (the extended cut on the DVD is better in this regard), the idea of Selena unleashing her own malevolent shadow-self as a kind of astral projection super-monster (one which the movie rarely, if ever, visualizes) is kind of great. You also have to respect a villain who puts a mountaintop fortress where there was previously no mountain, let alone fortress, in the middle of the town she's co-opting - then drives around in a Rolls, accompanied by stormtroopers.

On the downside, though, the major reason Selena doesn't like Supergirl is because of that boy they both like. So that sucks. Imagine if Wonder Woman had turned on Ares having a huge gay crush on Chris Pine. (Wait: actually: imagine that....)

But don't worry. If Selena's tug-of-war with Supergirl over Ethan's affection isn't camp enough, the movie has the answer: Selena banishes Supergirl to the Phantom Zone, where she passes the narcotic squirt-bottle around with Peter O'Toole.

Let's unpack that. First of all, Supergirl is the only film in the series (so far) to present the Phantom Zone as something more than just a netherspace to which one would not like to travel; it brings the alien prison to life as a lunar wasteland covered in a thin black paste, where Supergirl's powers are gone and where time has no meaning. So, Peter O'Toole's Zaltar - serving as Kara's personal Obi-Wan Kenobi, first on Argo City, now here; and in O'Toole's case, slumming like no British great has slummed it before or since - has probably only been in TPZ for a couple of weeks by the time Kara catches up with him.

Nonetheless, he's already right at home. (He literally has a home.) And he's got this weird squirt bottle full of... something, with which he dulls the pain. I could spend a month trying to work out what exactly "squirt" is - for all its sinister potential, in a place like the Phantom Zone it could just as significantly be water - but back to our heroine.

I'm a great proponent of the idea that the trick to writing Superman and Supergirl is this: if you take away their powers, they're still themselves. A de-powered Supergirl is still a hero, as she demonstrates at length in this sequence, refusing to submit to Zaltar's nihilism and, indeed, shining enough light on him that he agrees to help her fight her way out of the Zone. It's a nicely powered sequence of events which set up Supergirl's grand finale, wherein Kara returns to Selena's lair to fight the witch, smashing through her magic mirror in the process.

It's beats like that which propose that Supergirl is more of a fantasy film than action-adventure, putting it more in line with The Dark Crystal or The NeverEnding Story than the pulp serial heroics of Superman or Raiders of the Lost Ark. Now, this is a movie which also contains a brief but memorable overcome-the-high-school-bullies-in-the-shower subplot at Midvale Academy, which behaves like a deleted scene from Revenge of the Nerds, so it's clear throughout that Supergirl often doesn't know what genre it's in.

Still, as an aspirational power fantasy and comic book movie proper, Supergirl has chops that stand out in its era and pave the way for the better days of the genre to come.

Or put it another way: I was born a bit too late for the old Batman TV show, but Wonder Woman was on the air when I was a kid and was my very favourite show; my best friend and I played Wonder Woman (sadly, without dressup) as often as we did Superman or Star Wars. When Supergirl was released, we adopted her immediately into the fold of superpeople we hoped we could grow up to be like. Isn't that always the point?