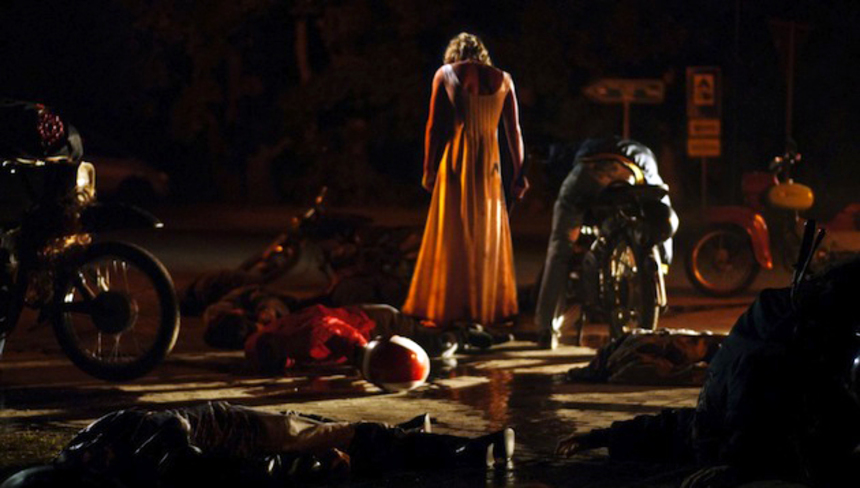 Der Samurai is the type of film I live for: well made and weird. I count myself lucky if I come across a film like this once every festival or so (unless that festival happens to be Fantastic Fest, in which case, Happy Birthday to me). It plays like a cross between Twin Peaks and Kill Bill with a queer sensibility, and although not perfect, it's the most audacious film I've seen at Tribeca thus far.

Young Jakob is a policeman in a small German town. He is timid and doesn't have much social life to speak of. His main duty seems to be dealing with the wolf that has been terrorizing the elderly and their pets. He does so by feeding it scraps of offal he gets from the local butcher shop. His rationale: if he feeds it, the beast will be kept at bay. But the wolf isn't the only thing lurking in the forest.

Jakob receives a package addressed to the wolf. Why he doesn't immediately open it, I'll never understand. (This is indicative of some of the leaps in logic you'll have to gloss over if you want to go along for the ride.) After that comes a phone call, instructing him to bring the package into the woods. There he comes across a man squatting in an abandoned house, wearing a white dress. The man is feral but alluring, and there is an instant attraction between the two. Despite this, Jakob spurns the man's advances. At some point, they both remember the package, which the man opens. It contains a Katana. Jakob's police instincts kick in. What follows is a non-stop game of cat-and-mouse played through the forest and around the town, as the titular Samurai goes on a decapitation spree, hacking and slashing his way through the locals and Jakob's inner demons.

The whole thing is an obvious allegory about struggling with one's sexuality; I don't think I am giving anything away by saying so. What I like about director Till Kleinert's approach is that he treats the manifestations of Jakob's inner turmoil as real. Everyone around him can see them. They affect the whole town. This allows the viewer to treat the film as a fantasy, and lessens the burden of suspending disbelief. Don't resist, like Jakob did. Just go with it.

If you do, you'll be treated to an inventive film and a bloody good time. Jaws will drop. Heads will roll. There are subtle moments of humor that will make you fall in love. The punching of the plastic swan. The bonfire dance scene. That scene right there, that's when I knew the film had me. I knew I was watching something special. And that final scene, the final shot, the song that plays over the credits. Great stuff.

The whole enterprise is made even more impressive by the fact that this is essentially Kleinert's senior thesis film for the German Film and Television Academy. It was partially funded on Indiegogo, to the tune of $14,000 (their goal was $45,000). I don't know where they got the rest of the money, or what their final budget was, but I don't doubt all of it ended up on screen. Der Samurai doesn't look like the work of a student. It is a quality piece of filmmaking with the directorial assurance of a seasoned veteran.

Then there's Pit Bukowski as The Samurai. His performance is pure sexual energy. He is like a caged beast, beaten and starved, let loose only when the cameras roll. But this beast has not been subdued or defeated. There is a glimmer in his eye that cannot be extinguished. If I were an American casting director looking for a fresh new talent, I'd be like, Bring me that German guy in the dress, post haste! (Because that's how people in the industry talk.)

My only concern is that some will interpret The Samurai's killing spree as a perpetuation of the stereotype that gay sex is violent. It is not an interpretation I would subscribe to, as I think it misses the point, but in the era of manufactured outrage, you can never be too careful. Yes, this is a violent film, but it doesn't equate that violence with sex. The violence is representative of an inner strife resulting from repression of self. Yes, swords are very phallic, and a sword is responsible for a lot of bloodletting in this film, but still. It's much cooler than, say, a guy swinging a lasso around.

There is a darkness to this film that is alluring. If you find yourself looking towards the fringes with longing, wondering what is lurking in the shadows that surround safe cinema, safe horror, you know what you have to do. Answer the call. Pick up the package and venture out into the woods to confront what scares you. Open yourself up to it, lure it in, and then consume it before it consumes you. You really have no other choice.