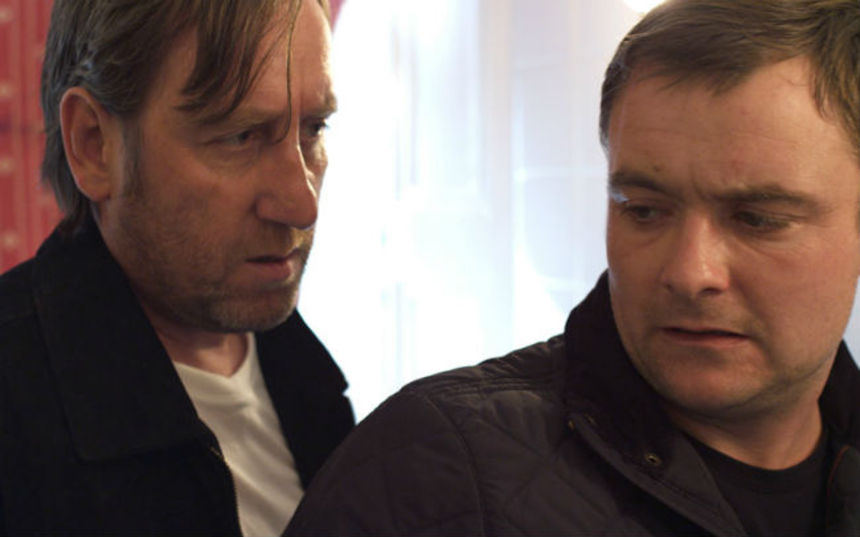 Ben Wheatley's Down Terrace was a dark, weird, funky, concoction with some of the blackest comedy (and least penetrable accents) I'd seen and heard in recent years. So when Mr. Wheatley's followup film, Kill List was scheduled for its World Premiere at SXSW last year, I made sure that I'd be in attendance for its first screening -- especially important since plot details were very vague for what sounded like a dramatic, possibly disturbing experience -- and I wanted to approach it completely fresh.

And that, then, has been the challenge for those of us who've written about the movie, because Kill List fairly well demands (and deserves) an open mind and a blank slate. So my recommendation is simply to go see Kill List. It opens in limited theatrical release in the U.S. tomorrow, and will be worth every last coin you scrape together to buy a ticket.

... I realize that some people -- OK, most people -- would like some idea about the movie, so what follows is a roundup of the four (4) reviews that have been published at ScreenAnarchy. No spoilers below.

My shellshocked reaction from that first screening at Midnight in Austin, Texas:

"Kill List is a film that almost certainly demands and will reward a second viewing, if nothing else to fully appreciate what Wheatley is doing here, combining a seething dramatic atmosphere where naturalistic conversational exchanges arise, with blunt passion and actions that reflect the inner turmoil of the characters. And a killer ending."

James Marsh reviewed it in connection with London's Frightfest in late August.

"Because of this loose and naturalistic approach to the material, the effectiveness of Kill List rests heavily on the shoulders of the actors, who are awarded a co-writing credit to acknowledge their improvisational contributions. ... Seen as a whole, Kill List more than earns its pay-off, which should leave audiences stunned, breathless and in dire need of a stiff drink."

James Dennis also reviewed it at London's Frightfest, and was left divided.

"Equal parts impressive and frustrating. ... Ambiguity can be a great tool for intriguing and some things are certainly better left unsaid, but it's out of place here."

"There's much to admire here - the performances, the rising sense of menace made apparent in even the most trivial exchanges of dialogue, some fairly impressive cinematography from DP Laurie Rose - but not much to actually like."

Mine is the only unqualified rave; I still highly recommend Kill List, which was one of the best movies I saw last year. However, even if you don't end up liking it, perhaps, at minimum, you'll agree that it's an admirable effort.