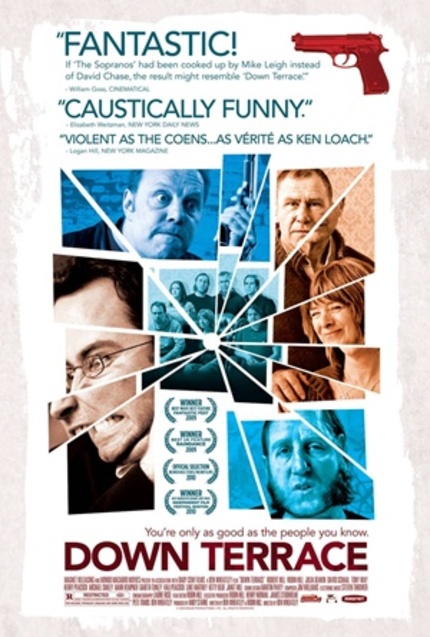 [Here begins a trio of Toronto-centric posts and, yes, I apologize to those of you who don't live here.]

Fans of bleaker than bleak comedy in Canada, give a nice round of applause to Evokative Films because they're about to give Ben Wheatley's award winning black comedy Down Terrace a theatrical release on these shores. Here's the official word:

Montreal, Thursday October 21st, 2010 - After screenings at the Fantasia and Vancouver International Film Festivals, DOWN TERRACE will be opening at the Carlton Theatre in Toronto on November 12th. This is the first English-speaking film release for Evokative Films, having concentrated its releases on International, subtitled films over the last two years.

Father and son Bill and Karl have just been released from jail, but all is not well at Down Terrace. Patriarchs of a small crime family, their business is plagued with infighting: Karl has had more than he can take of his old man's philosophizing and preaching; Bill thinks Karl's dedication to the family is seriously compromised when he takes up with an estranged girlfriend who claims to be carrying his baby; they have to explain the profit drop to the bosses in London and figure out who's the mole who turned them in. It's time to clean house. Recrimination, betrayal, murder and a spot of redecorating are quick to follow. Always remember: you're only as good as the people you know.
DOWN TERRACE breathes new life into the gangster genre by mixing-up family drama in the style of Mike Leigh, The Sopranos' gangster reality and the body count of a splatter flick, caught with a fly-on-the-wall camera.

The film, shot over only 8 days in Bristol, is a real family affair. The characters Bill and Karl are real life father and son Bob and Robin Hill. Karl's girlfriend Valda is Robin's wife Kerry Peacock. Down Terrace is really their family home. This is the first feature film for Bristol-based Ben Wheatley, after a few animated and live-action short films, advertisings and work on Channel 4's Modern Toss and the BBC's Time Trumpet, Comedy Shuffle, The Wrong Door and Ideal. He just finished principal photography on his next feature film KILL LIST. Ben Wheatley wrote DOWN TERRACE with Robin Hill and allowed space for improvisation by the cast, including Julia Deakin (Spaced), David Schaal, Tony Way, Micheal Smiley and Mark Kempner.

DOWN TERRACE won the Next Wave Award for Best Film at Fantastic Fest, the Raindance Award at the British Independent Film Awards, the Jury Prize for Best UK Feature at the Raindance Film Festival and the Grand Jury Prize Narrative Feature at the international Film Festival of Boston. The film played to acclaim at many film festivals around the world such as Rotterdam, Glasgow, Belfast, New York, Seattle, Los Angeles, Puchon, Perth, Melbourne and Espoo.

Do you feel this content is inappropriate or infringes upon your rights? Click here to report it, or see our DMCA policy.
Ben WheatleyRobin HillRobert HillJulia DeakinDavid SchaalComedyCrimeDrama