Now on 4K: FOR ALL MANKIND, The Final Frontier Still Beckons 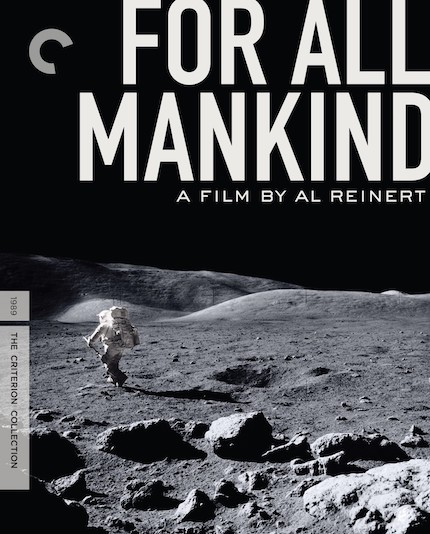 I am a space nut.

For All Mankind
Now available from The Criterion Collection.

The primary reason to buy this edition now is to upgrade to the "new 4K digital restoration of the original 1.33:1 framing and the alternate 1.85:1 theatrical presentation, with 5.1 DTS-HD Master Audio soundtrack," in the words of the Criterion Collection.

The extras, which are presented on Blu-ray in the new combo edition -- the 4K gets its own disc -- are carried over from Criterion's previous edition of the film, released in 2009 on Blu-ray and DVD. The film itself, which took journalist turned filmmaker Al Reinert some 10 years to complete, was released in movie theaters in 1989, which is when I first saw it.

It's no wonder that Al Reinert subsequently toiled in the Hollywood picture factory, co-writing Apollo 13 (1995), two episodes of the HBO series From the Earth to the Moon (1998), and also other projects. He has a wonderful sense of story. The documentary was compiled by Reinert and editor Susan Korda from some six million feet of raw footage and 80 hours of interviews he conducted with the 13 of the 24 astronauts who flew into space during the brief period, 1968-1972, when nine voyages set sail from Planet Earth into the Great (only somewhat) Unknown.

What emerges is a startling independent film that tells the composite story of a trip to the moon and back again. Running 80 minutes, the film has no narration, and doesn't need it, though subtitle tracks are available that identify the names of the astronauts whose unidentified voices are heard telling about their unforgettable experiences. Music by the great Brian Eno wafts through and around the words that we hear, merging together with the otherworldly images that unfold during hazardous hours that always hold the potential for instant death.

The special features include an audio commentary with Reinert and astronaut Eugene A. Cernan (aka the last person to set foot on the moon); a 'making-of' doc on the doc; excerpted interviews with the astronauts; a program about astronaut Alan Bean's artwork; and NASA audio highlights and liftoff footage.

The film itself remains one of the best movies I've ever seen, and I've watched it multiple times. It belongs in the library of every serious film fan.