Review: FOR ALL MANKIND, Dangerous Encounters 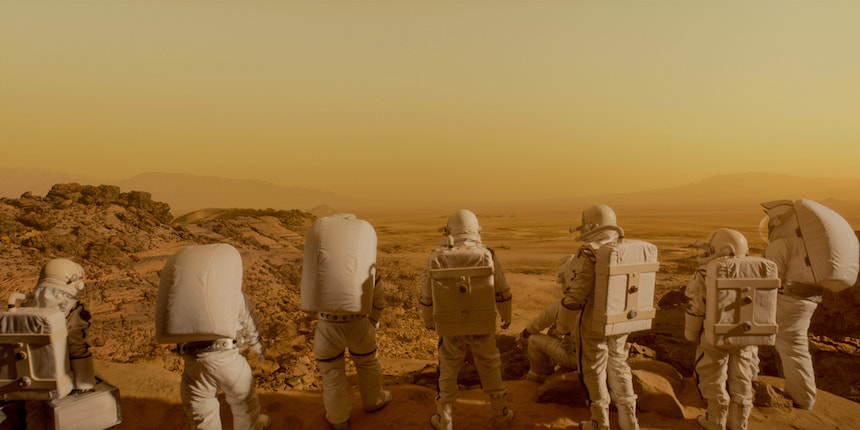 Space is a dangerous place.

Throughout its first two seasons, the series has repeatedly dramatized the dangers that await intrepid travelers who dare to launch themselves into outer space.

Created by Ronald Moore, Matt Wolpert and Ben Nedivi, the series swiftly established an 'alternate history' timeline in which the Soviet Union lands on the moon before the U.S. What happens in a future shaped by a permanent 'space race' that never ends? As a "lapsed space fanatic," I enjoyed the first season, which I binged more than a year after the show debuted in November 2019, as well as the first episode of the second season, a season that got better as the storyline developed and characters were developed, along with a smart sense of when to bend and twist its own 'alternate history' timeline to ensure heightened dramatic tension, culminating in a concluding episode that was truly magnificent, tying up all the loose narrative threads in a smashing and surprising manner.

It's one of the best season finales that I've ever seen, which set unreasonably high expectations, at least on my part, for the third season. Imagine my surprise that the first episode of season 3, written by Matt Wolpert and Ben Nedivi, fully lives up to those expectations.

As with the first episode of the second season, it's an excellent jumping-on point for anyone who hasn't seen the first two seasons. Picking up ten years later, in 1983, Ronald Reagan is President of the United States, and Mikhail Gorbachev is about to become leader of the Soviet Union.

Former astronaut Ed Baldin (Joel Kinnaman) is still at NASA, teaching. Karen (Shantel VanSanten) has co-founded the first hotel in outer space. Margo Madison (Wrenn Schmidt) is ensconced as head of NASA. Ellen (Jodi Balfour) has fervently devoted herself fully to politics and is a viable candidate to be elected President. Molly (Sonya Walger) has refused to allow her blindness to keep her from being as grouchy and brilliant as ever. Kelly (Cynthy Wu), the daughter of Ed and Karen, has proven herself to be a brilliant scientist. Danny (Casey W. Stevens), the son of the two astronauts who perished in the conclusion of the second season, still harbors unresolved feelings and emotions, complicated by a failed romance that haunts him. Danielle (Krys Marshall) continues to demonstrate her suitability for greater challenges as an astronaut.

With all these moving parts in play, plus more that are introduced beginning with the second episode, Matt Wolpert, Ben Nedivi and their fellow writers skillfully maneuver a developing narrative that addresses political and cultural issues from the "real-world" (non-alternative history) and imagines the relatively greater (or lesser) impact they would have in the alternative history created for the series. The show still has a tendency to indulge in melodrama, occasionally to a distracting degree, but the third season integrates its better into its storyline, so that it seems to play a more natural role in the events that develop.

Actors portraying returning characters find additional grace notes in their characters to amplify or diminish, which means we can continue to relish the juicy performances that add immeasurably to the story. Some of the developments are initially puzzling or disconcerting and occasionally ring false, yet within the alternate history, it makes perfect sense that not everything will play out as I might have wished.

After all, I'm still stuck in the real world, where I will never be an astronaut. As a combination of wish fulfillment bolstered by good writing, superb direction, and sterling performances, For All Mankind continues to soar.

Do you feel this content is inappropriate or infringes upon your rights? Click here to report it, or see our DMCA policy.
Apple TV+Jodi BalfourJoel KinnamanShantel VanSantenUSWrenn Schmidt