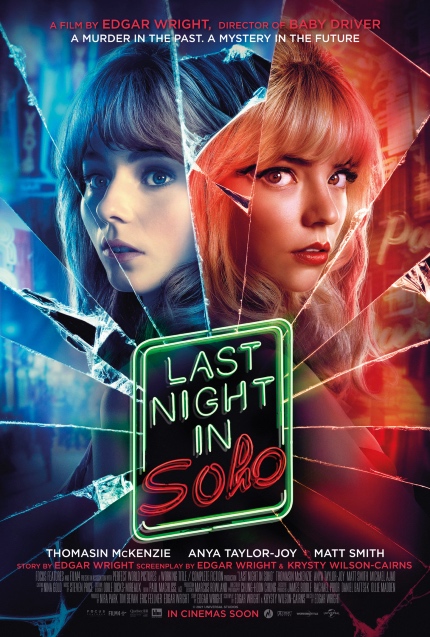 Every film from Edgar Wright is a kind of gift.

Especially to audiences who like to unwrap things over and over again, from the Rom-Zom-Com satire of Shaun of the Dead, to the Nintendo-heightened relationship foibles of Scott Pilgrim vs. The World.

Even Baby Driver, which was a bit of a stumble, had some fine early rhythms, both visually, and a knack for a needle drop. The call-back screenwriting, and sophisticated visual storytelling lend his pop-culture laden fantasias, with enough relatable humanity among the bombast, to just hit that sweet entertaining spot that rewards multiple viewings.

Thus, it is wonderful to see the director back in full form. Last Night in Soho dazzles with technical bravado, much of it involving mirrors, do-si-do spinning long takes, and an absinth-laced love letter to London's swinging 60s. The brightly-lit nostalgia (there is danger in that) of Soho in the era of Thunderball and Dusty Springfield, is contrasted to the more septic and digital 21st century reality (not without its own peril).

He has two very game young actresses, Thomasin McKenzie (Jojo Rabbit) and Anya-Taylor Joy (The VVitch), who function like fashion doppelgängers, both separated and united by mirrors and reflection. I have not seen such energetic and creative mirror work done on screen since Joseph Losey’s 1963 slow burn psychodrama The Servant, or Gary Sherman’s technically adroit Poltergeist III. If I am not mistaken, Sherman may even have been a consultant on Last Night in Soho.

McKenzie plays Eloise, a young country girl who gets into an exclusive London fashion design programme, with the requisite excited-nervous move to the big city. This is further loaded with her own mother’s suicide in London, and a history of mental anxiety in the family.

Eloise’s grandmother (Rita Tushingham -- Spotify the Franz Ferdinand tune for further clarification, kids) is nervous at the thought, and quietly warns her of the perils of the big city. “London can be a lot,” she says in an understated way with a bit of hand wringing. She sends off her granddaughter with well wishes, nonetheless. A girl has to make her own way in the world.

When Eloise arrives in the city, dorm life proves not for her. She cannot relate to her fellow students, and, with only a single exception, they cannot relate to her. So she finds alternate lodging in Soho with a kindly old dame, Ms. Collins, played by the wonderful Dianna Rigg in her final role. Terence Stamp prowls the neighbourhood doing Terence Stamp things. I love how he orders a pint of Kronenbourg from the local watering hole. The casting of so many iconic actors from the period provides yet another mirror of the current era to the previous one.

In fact, nearly every single line of dialogue in this film has double meaning. That is clever by far, a screenplay I cannot completely wrap my head around.  It will, of course, reward repeat viewings. But it is well enough to see Wright’s gamesmanship unfold as the film progresses. There are plenty of his familiar transitional “people wipes,” jump cuts, and brash editing sound cues.

Eloise, upon going to sleep in the grand old bedroom that would not be out of place in The Sentinel, is whisked back into the sexy, smoky, and neon-lit fantasy of the the 60s. Over several nights she bears witness, while simultaneously interacting with, the rise and fall of a cocksure aspiring singer, Sandy (Anya-Taylor Joy) at the hands of a suave talent agent, Jack (Matt Smith).

What starts off as fun and inspiring (fashion-wise), to Eloise, quickly turns sinister. And the lighting begins to take on a harsher, redder, Dario Argento tone. On several occasions. Eloise comes only a hair's breadth from being struck by a moving cab, an act of subtle priming of the audience, as the movie starts spinning its plates faster and faster.

The past and present begin to juxtapose into a kind of waking nightmare, centred around the fear of men and sexuality, and Eloise’s reaction to Sandy’s fate all those years ago. Wright hoists his influences clearly, giving a modern CGI update to a key sequence from Roman Polanski’s psycho-hysterical Repulsion, that, admittedly, works better than Guillermo del Toro’s overwrought CGI rendering of the gothic romance. Crimson Peak is, at a stretch, a kissing cousin to Last Night in Soho, but I mention it here because Wright is toying with the keys and mysteries of that subgenre, within not so much a manor house, but a labyrinth that is a different period of time, and a mediated one to boot, where assumptions and nostalgia are the blind alleys, or steep stairwells. A temporal gothic of cultural mores.

As Hot Fuzz was about all about bringing a Micheal Bay Bad Boys sensibility to the quiet English countryside for giggles, only to disguise what is in effect, a pithy satirical remake of The Wicker Man, I would argue here that there is a sly 10 Rillington Place riff playing out in the background.

“We all pay for a broken mirror,” a character says at one point, both ominously and out of resignation. With guile, Wright is signalling to us the opposite. That we may sit back and enjoy, even the scary bits, as we are in good hands. It is all in good fun. It is a magician's act that I am anxious to revisit again, and again.

Do you feel this content is inappropriate or infringes upon your rights? Click here to report it, or see our DMCA policy.
Anya Taylor-JoyEdgar WrightMatt SmithThomasin McKenzieUK