Genre Seeds: CREATURE FROM THE BLACK LAGOON, Creepy and Submerged 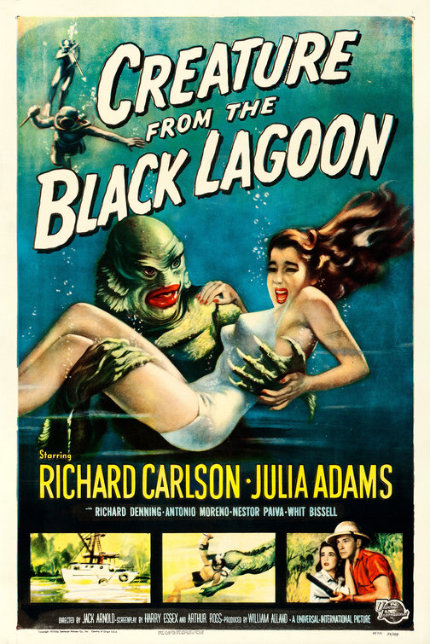 Is that a Gill-man I see?

Creature From the Black Lagoon (1954)
The film is now streaming on The Criterion Channel.

As the world prepares for Guillermo del Toro's Nightmare Alley, due to be released in theaters on December 17, my thoughts drifted back to del Toro's previous film, the Academy Award-winning The Shape of Water (2017).

Genre fans immediately saw the film's connection to Jack Arnold's Creature From the Black Lagoon (1954), and the filmmaker readily spoke about watching the movie as a 7-year-old child and his later desire, as an adult, to remake the film in his own image. Those plans did not work out, so when writer and colleague Daniel Kraus mentioned his idea for a film about a janitor who takes home a creature from a secret government facility, del Toro immediately bought the idea and began development on what became The Shape of Water.

This past Saturday, Creature From the Black Lagoon was highlighted as a "Saturday Matinee" on The Criterion Channel. With a running time of only 79 minutes, I thought it would be pleasant to revisit a "horror-adjacent" film that I hadn't seen in some time in order to kick off my movie watching during the scary season.

The film, originally produced and screened in 3-D, proved to be more gripping and imaginative than I remembered, even in 2-D on television. After 67 years, its age definitely shows, especially in regard to the performances, which often marry 'creaky' and 'stage-bound' in their loudly declaratory delivery. Yet the underwater photography remains enthralling, and if allowances are made for its plot-driven contrivances and the limitations of its location shooting -- with California and Florida standing in for Brazil and the Amazon River -- it's a richly enjoyable experience.

Since this is the latest entry in our ongoing 'Genre Seeds' series, I want to highlight what the film does that makes it an example and/or reminder for aspiring and/or newer filmmakers:

Watch old movies. Guillermo del Toro saw the movie as a child, and it stuck with him. Even when he first saw it, though, his imagination was carried away as he wondered what might happen if the story developed as he hoped it would.

Nearly all filmmakers were initially inspired to become filmmakers because of films they loved watching in their youth. As filmmakers begin to establish their own careers, however, some might be inclined to shy away from watching older films that are not in their area of interest. Their time gets sucked up by preparing for their current projects; their personal lives and responsibilities inevitably grow.

That's all completely understandable, but if you don't set aside time to watch movies that are not related in any way to what you are doing now or plan to do in the future, you may be missing out on a valuable source of inspiration. Creative minds can be sparked by most anything, yet if you don't continue absorbing what was done in the past, your future work may suffer. And you never know where that inspiration will come from.

Keep It Moving. This issue comes up time and time again in genre films, and can never be emphasized too much, in my mind.

Creature From the Black Lagoon may be relatively brief, even in company with many other relatively brief genre films from the 1950s. Still, it gets the job done, introducing a key player who discovers the skeletal remains of a prehistoric creature, then the creature itself, then the leading players, an often-shirtless ichthyologist (Richard Carlson), his research assistant girlfriend (Julie Carlson), and their kinda icky boss (Richard Denning), who has one-way designs on the young woman.

Boom! We're quickly off to the Amazon River -- actually Florida; a reminder that you're not fooling anybody, even if you shoot in black-and-white -- the expedition begins, more swimsuits are donned, dangers ensue, one right after the other: bam! bam! bam!

Jack Arnold proved himself to be a master of making films that fly by. Even without cutting scenes into incomprehension, which some modern blockbuster filmmakers do in a vain attempt to make their 'action' scenes more exciting, Arnold instead trimmed any fat that may have been present in each scene.

Each scene is vital to the narrative and moves the plot along. Sure, developing the characters to a greater extent would have been a bonus. But adding footage of the icky boss, for example, perhaps plotting his borderline villainy, was completely unnecessary. (If only filmmakers who make television shows could learn this lesson!) We know the icky boss is, in reality, a frustrated lothario, and only wants to exercise his financial dominion over the mission. We know already!

Respect your audience, and keep that running time to an absolute minimum in order to give the audience a rousing bit of entertainment. Or, dawdle and head off endless side trips that add nothing to the narrative. We won't care, because we will have stopped watching.

Note to producers and/or financiers: the film proper is preceded by a prologue that makes Biblical references in an apparent misplaced attempt to be taken seriously. Never do this! Embrace what you are.

Creature from the Black Lagoon

More about The Creature From the Black Lagoon