Genre Seeds: I START COUNTING, Bolstered By a Teen 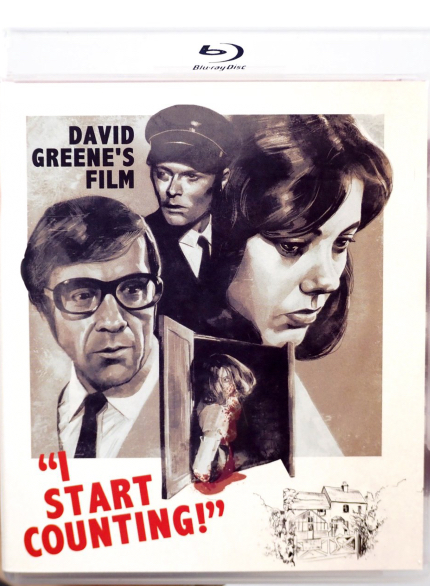 What can filmmakers learn from a hard-to-classify film made in late 60s Britain? Plenty.

I Start Counting! (1970)
The film is now available on Blu-ray from Fun City Editions.

Is it a coming-of-age story? A horror thriller? Or something else entirely?

Before she had decided to pursue acting as a career, ballet dancer Jenny Agutter, then 16, starred in an adaptation of a novel by Audrey Erskine Lindop. First published in 1966, the story follows a teenage girl who begins to suspect that her 30-something foster brother George (Bryan Marshall) is a serial killer in the "new town" where they live in England.

Showcasing a new 2K restoration from its 35mm interpositive, I Start Counting! looks very, very good on a recently-released Blu-ray edition from Fun City Editions. The package includes special features that are complementary in their entirety, which is a rare thing in my experience: a delightful new interview with Jenny Agutter about the film and its place in her career, an informative and rather fabulous audio commentary by film critic Samm Deighan, an astute video essay by filmmaker Chris O'Neill, and two sparkling new essays by film and TV historian Amanda Reyes and filmmaker Matt Stephenson.

All these features look at the film from different, complementary perspectives, which is great. Plus, an image gallery of stills is included, along with the original theatrical trailer.

Since this is the second entry in our new 'Genre Seeds' series, I want to highlight what the film does that makes it an example and/or reminder for aspiring and/or newer filmmakers:

Script: As sketched out brilliantly in Samm Deighan's excellent audio commentary, director David Greene already had a good understanding of the importance of the source material, from his work in television and his first feature, The Shuttered Room (1967). What's wonderful about this film is that it's never quite clear that it's strictly a coming-of-age story, or that it's primarily a serial killer film. (Frankly, Deighan leans one way, and video essayist O'Neill leans another way.) Ultimately, David Greene directed in such a manner that it could be either, in his choice of framing and the gradually shifting perspective of leading character Wynne.

The narrative twists and turns are deftly handled, so that Wynne's changing moods are left largely within her own brain, spelled out largely on her face and body language. That's a testament to Agutter's brilliant acting instincts, but also Greene's ability to direct, to guide her to a place where she could spill her guts without having to tell everybody exactly what was on her mind. It's clear that Greene had confidence in his material.

Experienced and talented filmmakers can sometimes overcome the limitations or faults in a script, but it's much more rare for an aspiring filmmaker to overcome a weak screenplay.

(2) Casting: Last time, in our entry on A Life in Stake, I talked about how the film benefited by offering Angela Lansbury an opportunity to star at a low point in her career. Here, I Start Counting! benefits from the casting of Jenny Agutter, who doesn't even recall auditioning for the role.

Director David Greene evidently made the decision to cast her based on the few roles she had done. Evidently, she fit his conception of the character, and he was gentle yet confident in how he gave her direction, as the actress vividly remembers in the interview included on the disc. He also surrounded her with more experienced actors, some of whom would go one to enjoy varied, bountiful careers (Bryan Marshall and Simon Ward especially).

The main benefit of the casting, though, is that even if Agutter had not given the wonderful performance she gives here, capturing the many shifting moods of an adolescent girl who is beginning her transformation into adulthood, he still had the ingredients to make a good, captivating movie!. That's because he started from a very good script -- see (1) above.

The film is a wonderful surprise and I'm glad that I bought the Blu-ray from Fun City Editions, which is highly recommended.

Do you feel this content is inappropriate or infringes upon your rights? Click here to report it, or see our DMCA policy.
Bryan MarshallDavid GreeneFun City EditionsJenny AgutterSimon WardUK