Robby Benson and Glynnis O'Connor star in an enduringly sweet teen romance, shot doc-style on the mean streets of Manhattan. 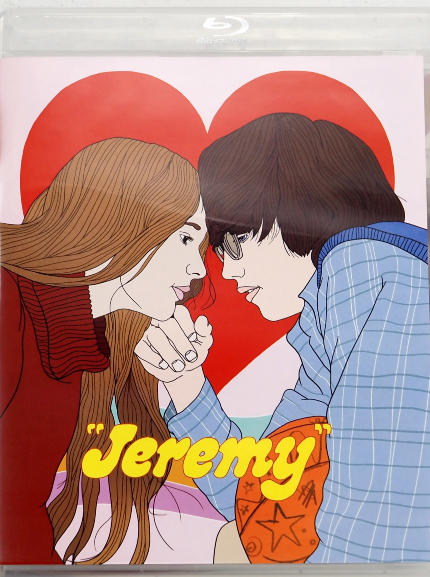 What can modern filmmakers learn from a scruffy romance released in 1973?

Jeremy (1973)
The film is now available on Blu-ray from Fun City Editions.

Ordinarily, a teen romance would not be something that we cover at this much harder-edged, international genre film-site, but I believe this particular teen romance merits an exception.

It was shot on the mean streets of New York City, around the same time that Martin Scorsese was making Mean Streets, representing an era in the city that would slowly change as the years passed, which means it has nostalgic value for those of us, including myself, who lived in the city at one time or another, or enjoy most any film set (and actually shot) in the city that never sleeps. (Again, myself included.)

It was the film that made Robby Benson a star, at least in a certain kind of 70s/80s teen-appealing movie, in which he became a teen idol. (Eventually, he would voice the beast in Disney's animated Beauty and the Beast.) It was the film in which Glynnis O'Connor made her film debut. It was the film in which Benson and O'Connor met, leading to a real-life romantic relationship that lasted for years. Of even deeper impact upon their lives, they became lifelong friends.

Since this is the latest entry in our ongoing 'Genre Seeds' series, though, I want to highlight what the film does that makes it an example and/or reminder for aspiring and/or newer genre filmmakers:

Casting: I alluded to this point in my comments on I Start Counting!, which was bolstered by an excellent lead performance by teenager Jenny Agutter.

Here, however, director Arthur Barron cast Robby Benson, who was experienced as an actor in various stage productions and a couple films, alongside Glynnis O'Connor, who had very little acting experience at all, and hadn't even intended to appear in the film. Writer/director Arthur Barron saw something in the combination of the two, and it was kinda genius: Why not cast somewhat awkward teenagers as somewhat awkward teenagers?

To my mind, it's a brilliantly bold move, because they didn't have to stretch and contort themselves in order to capture the essence of their characters. It's the equivalent of casting non-professional actors as non-professional people in a found-footage film. If the little-experienced actors catch lightning in a bottle and deliver a nuanced, subtle performance, great!

If not, the film ends up with awkward actors portraying awkward people, which enhances the reality of the characters and, it is hoped, helps to captivate viewers. This avoids entirely the dehumanizing aspects of 80s U.S. sitcoms, which stubbornly insisted that children were smarter than their parents as a means to appeal to those same children, who were too smart to buy that garbage. (Right?)

Think about modern horror movies that have been derailed because too much was expected of the juvenile lead actors, especially if the filmmaker's intention was to sympathize -- or, at least, empathize -- with the plight of the characters. If the kid or teenager is supposed to be brilliant or able to outsmart a deranged, experienced killer, or anything like that, and the actor is not yet sufficiently experienced to pull that off, the film falls flat, and all the blood in the world can't make up for that.

Defy Expectations. What I'm thinking of here is that director Arthur Barron and cinematographer Paul Goldsmith frankly had little to no idea how to make a narrative film, as they have both freely admitted. They did, however, know how to make documentaries and so they shot on 16mm, resulting in a scruffy look that fits the story perfectly.

Describing Jeremy as a teen romance doesn't do it justice, since it's really more of a coming-of-age story. But, personally, I would never expect to see a Manhattan love story in 16mm. This was the 70s, though, and so such things were far more common.

Today, professional, well-trained filmmakers may try to pretend they are amateurs and so that's why the camera is shaking all the time, but even TikTok features an abundance of well-shot, low-cost storytelling, so just constantly moving a camera around isn't going to fool anybody. Defy those expectations, and make something special.

Jeremy is special, and holds a fond place in my heart, as the film evidently does with the folks at Fun City Editions, who put together a lovely Blu-ray of the film, featuring a new 2K restoration from its 35mm color reversal internegative.

"Susan and Jeremy," mixes newly-filmed, separate interviews with actors Robby Benson and Glynnis O'Connor, allowing them to speak candidly about the film in the context of their lives and their careers. O'Connor also provides a video introduction.

Video essayist Chris O'Neill contributes "A Phantom of Delight," which nails the appeal of the film, while the always astute Larry Karaszewski narrates a Trailers From Hell trailer commentary.

The newly-recorded audio commentary by film historians Kat Ellinger and Mike McPadden digs into the film quite brilliantly, as they share a wealth of information about the film, the city, and the context. It's a very satisfying, entertaining listen.

Rounding out the package are an image gallery of behind-the-scenes stills and a booklet with a fine new essay by film historian Bill Ackerman.

Give it a watch, and see if you're not won over. Bonus: the film is only 90 minutes!

Do you feel this content is inappropriate or infringes upon your rights? Click here to report it, or see our DMCA policy.
Arthur BarronFun City EditionsGlynnis O'ConnorRobby BensonUSLen BariDramaMusicRomance