10+ Years Later: Does THE CREATURE FROM THE BLACK LAGOON Sink or Swim?

Not many people know this, but the Creature from the Black Lagoon has my wedding ring. True story.

Several years ago, fellow Screen Anarchist Dave Canfield, for whatever reason, mailed a box of various and sundry Creature from the Black Lagoon plastic figurines to my kids. They divvied it all up, leaving a six or seven inch tall glow-in-the-dark Creature figurine for me. I promptly placed him proudly on my dresser. There he stands, with his arm up-stretched, and literally keeping me up at night. My wife, bless her, thought to drop my wedding ring onto the Creatures' arm, for safe keeping, since I can't sleep with metal on my fingers. It's been a daily thing ever since.

The kids had never seen The Creature from the Black Lagoon. In fact, The older ones have proven to be too chicken for any of the classic Universal Monster movies at this point, and the younger ones have been, well, really young. So we never watched Creature... until recently.

A few weeks ago, my glowing Creature ring holder caught one of the kids eye. "What is that guy, anyway?" "He's the Creature. From the Black Lagoon." "Is that a movie? Can we watch it?" "Actually... Why the heck not!"

So there we were at 8:45am, watching my nearly twenty year old DVD of director Jack Arnold's most famous film. The awesomely shrieking musical score, so influential, used and reused all over the place over the years, rang from the speakers. All four of my kids really dug the movie, particularly the mermaid-obsessed three year old girl. In her own bedtime stories, the Creature has become a misunderstood prince who was transformed and banished to the Black Lagoon from the princess mermaid kingdom he once ruled.

As for me, I think I like her version more than the slightly-baked evolutionary mumbo jumbo the film passes off in its effort to hastily explain what this monster could be. But then, this is a product of the modernist 1950s... I'd seen the film several times in the past, but not for at least ten years.

The true pleasures of Creature lie not with the primary protagonists and their humble boat mission into the Black Lagoon. I've never cared about whatever it that they're up to. Julia Adams, however, as the pretty girl that both of the lantern jawed white diver dudes compete over, is a radiant presence nearly as unforgettable as the title monster. Her "underwater ballet" sequence is a highlight of the picture, particularly when she's unknowingly joined by the Creature. When he later quickly and swiftly kidnaps her right out from under her shipmates, the shocked reaction in the room was felt.

The Creature from the Black Lagoon, released in 1954, also has the distinction of being the only one of the core group of iconic Universal Monsters significantly far removed in every way from the series' 1930s heyday. It is extremely in keeping with the popular horror of it's time: a frighteningly mutated "other" that transcends conventional norms.

He's not gothic nor folkloric, though I suppose there's an argument to be made for some sort of Lovecraft-ian connection. But (a confession) Lovecraft people wear me out. (Sorry, Lovecraft people.) I’ve made it this far in life not obsessing over the fish god Cthulhu, or whatever. This life, though, happily does include minor childhood phases of Boba Fett-like fascination with the Creature. He looks cool, he's quiet, we know almost nothing about him, and he's not to be messed with. And that's enough.

Many others have known this same fascination. My first boss and friend, the late Steve Koch, once upon a time dressed up as the Creature and stood out by the road to wave people into his comic book store.

A few years later, I had the rare pleasure of sitting in a packed tent in a field at the Cornerstone Festival watching an authentic 3D (blue and red) film print of the movie, the format in which it was intended to be experienced. Today, for those rarified few who've invested in a 3D television and blu-ray player, you can acquire the 3D high definition version of the film for home viewing. I am not that guy. Not currently, anyhow. But it would be cool...

Above all, I suppose that it's the loneliness of the Creature that struck me the most on this revisit. Presumably, he's the last of his kind. Also, he's human enough to recognize the charms of Julia Adams.

Since my previous viewing, I'd become versed Jack Arnold's other 1950's horror work, much of it more personally fascinating than this title. Tarantula, a giant spider movie, is one of the most nutty and oddly transcendent films ever made. The Incredible Shrinking Man is his true masterpiece. But Creature cannot be denied as a solid piece of atomic age horror in its own right.

Also because of Dave Canfield, I got to meet actor Doug Jones, who has a starring role in Guillermo Del Toro's The Shape of Water, a movie in which the actor plays what, by all accounts, appears to be an honest to goodness romantic version the Creature. In a world where cinema has managed to romantify even the most unsexiest of monsters (Arnold Vosloo's and Sofia Boutella's Mummys [1999 and 2017, respectively]; Nicolas Hoult's lovelorn zombie in Warm Bodies), the Creature was shaping up to be the last cold fish in the sea. Not that he didn't make his move with Julia Adams. Somehow though, she failed to find his grab-and-run approach to love alluring.

Rewatching The Creature from the Black Lagoon ten-plus years later, its clear that the film continues to age quite well. I don't love it quite enough to marry it, but I'm happy to let him hold my ring in the meantime. With Halloween around the corner, it might be a little chilly to take a dip in the Black Lagoon again, but it's undoubtably a good time to introduce the family to more Universal Monsters. 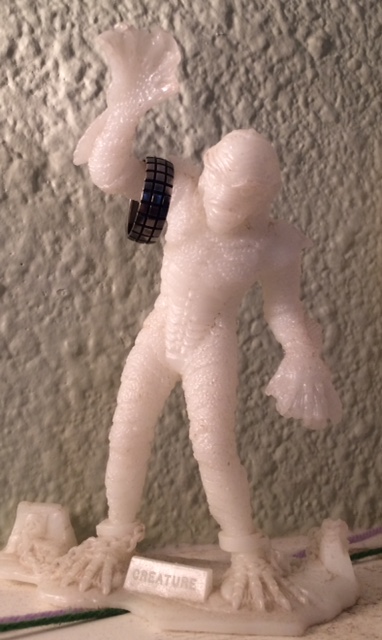 Do you feel this content is inappropriate or infringes upon your rights? Click here to report it, or see our DMCA policy.
classic horrorCreature from the Black LagoonJulia AdamsUniversal Monsters

More about The Creature From the Black Lagoon