Genre Seeds: THE CAPTURE Ties Noir to a Western

Lew Ayres and Teresa Wright star in a genre-mixing picture, directed by John Sturges, now on Blu-ray from The Film Detective. 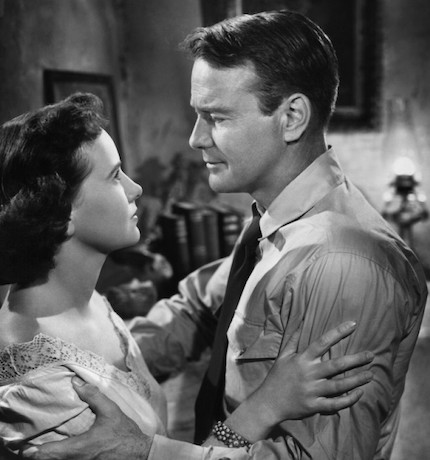 Is it a Western? Is it film noir? More important: Is it any good?

The Capture
Now available from The Film Detective.

In its opening sequence, a man runs from the authorities across a deserted desert landscape. This is never a good thing.

Ah, so this must be a Western, I thought. Very soon, however, the man seeks refuge, first in a lone cabin where another man lives with his wife and children, and then further out, where a priest takes note of his worn condition and his evident gun-shot wound, and kindly offers his cabin as a temporary retreat. Naturally, the priest also offers to listen to the man's story, which is when the film begins to manifest elements that were later identified as film noir.

Successful screenwriter Niven Busch (The Postman Always Rings Twice) had married successful actress Teresa Wright (Shadow of a Doubt) in 1942 and began writing roles with her in mind, eventually writing the terrific Western Pursued (1947), directed by Raoul Walsh and photographed by James Wong Howe, in which Wright starred. The film was a true noir Western, an unusual combination of elements that felt like dark and threatening storm clouds scurrying above the wide-open Western plains and mountains.

A similar feeling manifests in The Captured. It's less expertly-directed by John Sturges, still early in his helming career but displaying his good instincts for visual storytelling, and nicely photographed by Edward Cronjager, to maximize the Western landscapes and the shadows of the night. The voice-over narration ties together extended flashback sequences, as the man, Lin Vanner (Lew Ayres) talks about his guilt and remorse for what's done in the past, including actions that led to the death of another man, who may not have been guilty of anything.

Vanner ends up on the dead man's ranch, where his widow Ellen (Teresa Wright) and her young son are living. Not knowing what he's done, Ellen offers him a job and Vanner accepts, reasoning that it must be fate. But fate can play funny games, and Vanner's past comes back to haunt him. (Hint: most of the movie is told in flashback.)

Newly-released on region-free Blu-ray from The Film Detective, The Capture was likely mastered from the best source material available. It looks quite decent, especially for a low-budget independent production, though it should be acknowledged that the image quality is a bit rough and quite imperfect.

Still, this is definitely a film I'm glad to have in my collection, as much as anything because it's many creative-storytelling virtues were unknown to me. It's a film that has long been overshadowed by Pursued, even though they are comparable in the quality of the narrative and that rather rare mixing and melding of visual styles and elements that make it a noir Western.

On the audio commentary, C. Courtney Joyner and Henry C. Parke chat amiably about the film, the stars, and the production, filling in details about individual actors in the supporting cast and providing context about the careers of Ayres, Wright, and Sturges.

The Blu-ray also includes two brief featurettes, "Teresa Wright: The Actress Next Door" and "John Sturges: Man of Action," as well as a good printed essay by author Don Stradley, "Not Quite Picture Perfect."

From watching the film and the extras on the Blu-ray, I learned more about how to maximize what you have -- in this case, a good script and good actors in sometimes atypical roles, such as Victor Jory as a priest -- and keeping the pace zippy. The deeper emotional themes are present, and revealed almost entirely through action; yes, there are several dialogue-heavy sequences, but those are outnumbered by those told entirely through action.

That would be a good pattern for any modern independent action director to follow today.

Do you feel this content is inappropriate or infringes upon your rights? Click here to report it, or see our DMCA policy.
John SturgesLew AyresNiven BuschTeresa WrightThe Film DetectiveUSVictor JoryCrimeDramaWestern