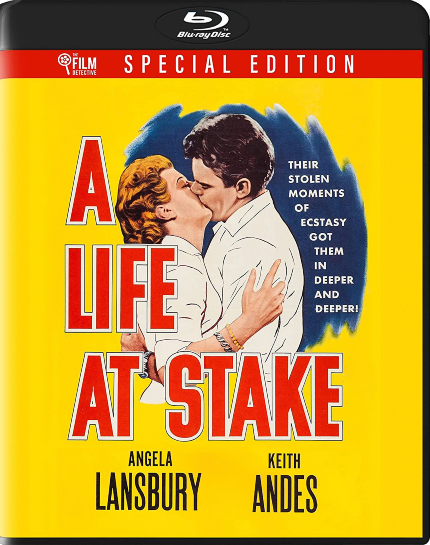 What can filmmakers learn from a low-budget film noir, made outside the studio system? Plenty.

A Life at Stake (1955)
The film is now available on Blu-ray and DVD, via The Film Detective.

A crime film produced and distributed with little fanfare in the 1950s, A Life at Stake has been restored and transferred in 4K from archival film elements. Now available in a lovely Blu-ray from the good folks at The Film Detective, along with three valuable special features, the film is a brisk, enjoyable, well-acted, and very entertaining view for genre film fans and an excellent lesson for aspiring and newer genre filmmakers.

Fresh off a variety show that introduced the infamous "laugh track," producer Hank McCune came up with the idea -- perhaps inspired by Double Indemnity (1944) -- then got Russ Bender, an actor who'd written one episode of the variety show, to write the screenplay, a twisty tale about a down-on-his-luck architect (Keith Andes) who is seduced by a femme fatale (Angela Lansbury) and set up to be a victim, then secured another friend, actor turned director Paul Guilfoyle, to helm the picture.

The film was barely able to secure distribution, then was sold off cheap to the now legendary production/distribution company The Filmmakers (the one with Ida Lupino), which got it into a few more theaters later. Then the film was evidently "lost," or fell through the cracks of history, where it has rarely even been mentioned in authoritative encyclopedias of film noir, which is a shame, since it surely deserves to be seen more and to gain greater visibility.

Since this is the first entry in our new 'Genre Seeds' series, I wanted to highlight what the film does that make it an example and/or reminder for aspiring and/or newer filmmakers:

Network, baby! -- Producer Hank McCune developed and maintained a good network of friends and friendly colleagues and then called upon them to work ons his film, a low-budget effort that nonetheless offered creative freedom for actors and artisans who yearned to do something other than what the studios were producing, yet were not given the chance in that system.

Make the sets work for you! Even with a limited number of sets and a limited number of exterior locations, director Guilfoyle made great use of what he had. Quick cuts cover over the impression of those limitations; also, the clever and effective use of shadows by cinematographer Ted Allan, cut expertly by film editor Frank Sullivan, minimizes what's missing and maximizes what's present and/or suggested.

Casting makes a difference - truly. Angela Lansbury had two Academy Award nominations, but her career was floundering. Her career between those two Oscar nominations, and her third -- for The Manchurian Candidate (1962) -- was beset by the paucity of roles offered to her, usually supporting duds. She was probably to get to play someone about her own age in a starring role, especially since she brings the character to life and makes her various changes and shadings entirely believable. Claudia Barrett makes quite a lot out of her role as well, a stereotypical "good girl" whose strength enables the lead male character to make something of himself.

Jason A. Ney's audio commentary is exemplary; he's incredibly well-prepared and fills nearly every minute with fascinating -- and quite useful -- information and insights. He also wrote a printed booklet that accompanies the release, putting the film into context among its brethren in the dying days of film noir (especially B-movie film noir).

The third valuable special feature is the 10-minute Hollywood Hitch-hikers: Inside the Filmmakers, in which Courtney Joyner expertly outlines the history and legacy of the legendary company, The Filmmakers, that eventually distributed A Life at Stake.

Easily outstanding, this Blu-ray Special Edition looks very good; there are only a couple minor blemishes remaining on the transfer, which I only noticed on my second viewing. Highly recommended.