In 2016, the legendary Italian-American filmmaker Martin Scorsese managed to release Silence, a highly personal project that took him more than 25 years to complete. It's no secret that the key producer in the culmination of this effort was Gastón Pavlovich, who was subsequently invited by Scorsese himself to collaborate on his next feature.

Eventually, Scorsese decided to direct the adaptation of Charles Brandt's book I Heard You Paint Houses, which is based on a series of interviews with Frank "The Irishman" Sheeran, a working-class and family man, World War II veteran, member of the Teamsters truckers union, and also part of organized crime.

The Irishman is an epic film of remembrance, with which Scorsese returns to the gangster cinema and to several of his favorite actors: in addition to Robert De Niro (who plays Sheeran), we have Joe Pesci and Harvey Keitel as the criminal bosses Russell Bufalino and Angelo Bruno respectively, not to mention that another icon of this type of cinema (Michael Corleone and Tony Montana himself, Al Pacino) debuts in the director's filmography, playing Jimmy Hoffa, the leader of the Teamsters union whose ties to the mob caused his disappearance in 1975.

After the Latin American premiere of The Irishman at the Los Cabos International Film Festival, ScreenAnarchy chatted with Mexican producer Pavlovich. ScreenAnarchy: Once you knew that THE IRISHMAN would be Scorsese’s next movie, what were your impressions of the material?

Gastón Pavlovich: They told me there was a script at Paramount, but I had to take out the script and the rights to do it from Paramount, because they had the story for 10 years but they hadn't decided to do it, they were stuck.

The story itself fascinated me when Scorsese told me about it. We managed to get the script and the rights out of Paramount after some negotiations.

I read the script and said “there's something very special here”, but special in the sense that it's in the style of The Godfather, great drama, great characters, epic, but it’s a very slow drama, it's not for anyone and that’s why nobody wanted to do it in Hollywood. By common sense, it was a very slow and very long drama. I knew it would be a great challenge from the beginning.

So what was the key to produce a nearly four-hour movie that takes its time to explore its characters?

I like those stories, I like when the character has great personality, when the characters rule over the story. I knew that for that no one was better than Scorsese. And then, no one was better than those actors to handle such a story. I had great anticipation to see how that chemistry worked, that dynamic. It was very nice to see how they prepared, how they practiced the lines, the movements, the gestures, how they prepared for the scenes.

At the same time, I was addressing the issue of the production plan and the budget, putting together the contracts to have everything ready. It was a fascinating but very complicated process because we were seeing how the budget grew and grew and became financially complicated. Until Netflix arrived, that situation improved a lot.

In addition to De Niro and Pacino, there's Joe Pesci, who practically returned from retirement…

In that sense, I was just waiting to be told whether or not it was a go. Meanwhile I was preparing ideas to be able to replace him in case he wasn't going to make the movie. Among them I had suggested Leonardo DiCaprio. But finally one day they talked to me and told me "he accepted, have his contract ready, let's talk to his agents" and all that process. I thought he was going to be very reluctant or in a bad mood or something, because his friends "forced” him. But no, on set he was the most playful and pleasant person, he was generally in a good mood. 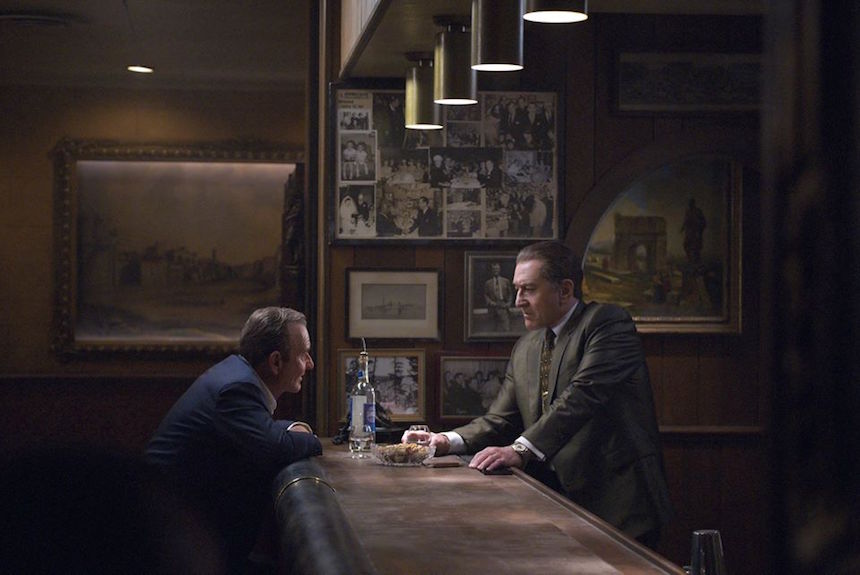 You commented on Twitter that you wanted DiCaprio not only for this role, but for you he had to be in this great production, but that he finally went on to shoot Quentin Tarantino’s ONCE UPON A TIME… IN HOLLYWOOD instead. In that sense, how is the process with Scorsese to suggest actors and how much do you get involved in that part?

Of course Scorsese is open to suggestions and the DiCaprio discussion did happen. But he perfectly visualizes his stories, the actors and so forth, so there was no doubt in The Irishman about who was going to be who. He wanted to bring his gang together, now also Pacino with whom he had not worked; I was very excited about that and nobody dared to propose something different. There was not much discussion there.

Only in the case of Pesci that was getting complicated and I told everyone "we are going to have an alternative, just in case, and I suggest DiCaprio", because imagine everyone together: Pacino, De Niro and DiCaprio, that's also a winning formula. But from the first moment they told me “yes but DiCaprio is already signing with Tarantino, they will be similar dates, we believe that right now that doesn’t work."

About the so-called de-aging, these special effects to rejuvenate the actors that took a long time. When you watch the movie, it takes a second to get used to it but then they feel adequate. How did you get involved in the de-aging process that has generated a lot of expectation?

Since we took out the project from Paramount, Scorsese had the idea of ​​testing this technology that had been proposed to him. The company is called ILM. Scorsese proposed it to me, but I thought it was going to be just for some scenes and not all. We did tests with De Niro and we liked it, but we felt that the technology was not 100% ready, though they promised us that it would be 100% by the time we finished filming. There was the risk: shoot the movie and see if the technology was ready after that. It could have happened that they told us two more years of waiting to finish it. It was a risk but we decided to take it because we thought the company would be ready. And said and done, when filming ended, a few months later ILM told us "100% ready." The tests we saw at that time already looked much more realistic. 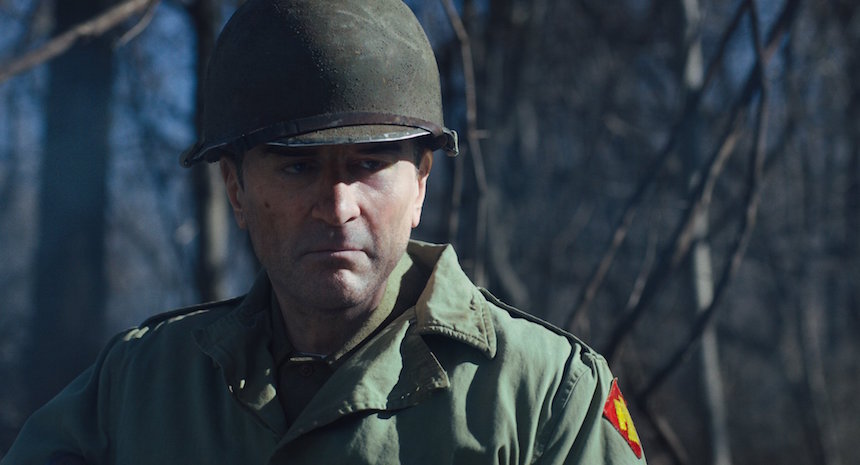 Even so, Scorsese, as a good craftsman, dedicated a lot of time to that, it was a very detailed process. It was a great duty on his part, because he was dedicating time and effort to make sure you didn't notice, that it was all very natural, very organic.

Talking about the many themes of the film, I was especially struck because it tackles the stage when the protagonists are very old. After GOODFELLAS and CASINO, THE IRISHMAN feels like the most mature Scorsese through a reflection on life and his own career…

Both as a producer and as part of the audience, I liked to see how Scorsese closes that circle, how he closes that circle with all that gang, how he sends a message saying: “this is our great goodbye", paying homage to cinema, to a story and to the characters.

Then also how he closes the circle of saying, “well, everything we've been telling you with the stories of the mobsters, this is the reality, that's how they end up: dead or dead inside, alone and isolated." That message with this movie, of closing the circle of that great generation that they had, and then sending the message of the world of gangsters, saying at the end: "it doesn’t end well, never will it end well for anyone"... I found that very important, both messages.

Sometimes Scorsese's cinema is misunderstood in the discussion about cinematic violence and its inherence in society. I have noticed that you are very critical, of the narcoseries for example. Sometimes people, probably the ones who doesn't even watch a movie like THE IRISHMAN, want to criticize Scorsese for the same thing, but particularly here his intentions are very clear…

Exactly... if Scorsese had been invited me to Goodfellas I might have accepted because of the excitement of being with Scorsese. But maybe not, because I would feel it very violent. Here, as you may have noticed, it's not an apology [for violence]. I found a very clear message, here we aren’t promoting this and it doesn’t work, here they end badly. 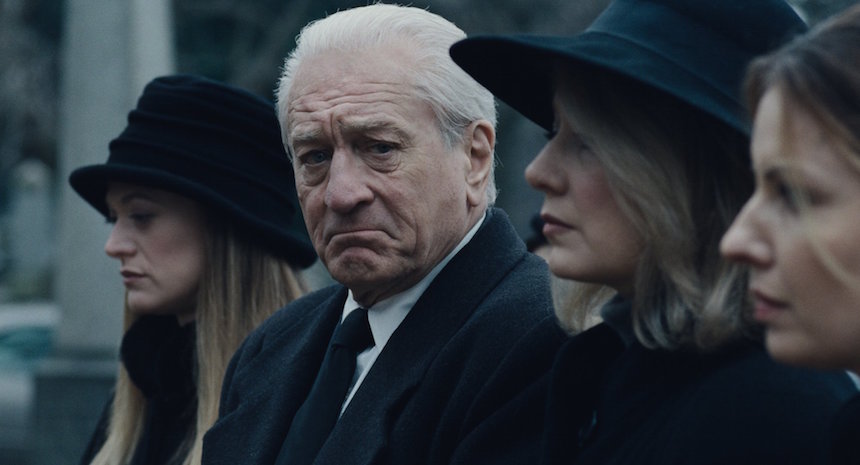 My criticism generally about the [narcoseries] that I have seen, especially in Mexico, is that they end up giving Mexico an image in which everything is a topic related to drug violence. I don’t deny that it's a reality, however the way they portrait the characters in those series is almost glorious, it's inviting everyone to be like that because they are the ones who end up winning always or generally. And it can’t be that way, it's not real and I don't want to say that to the kids in this country [Mexico].

I think The Irishman is a great example because they [the gangsters] are not glorified, here you feel sorry for them and it hurts to see the loneliness with which the last character [Sheeran] ends. The Irishman, in fact, has very little violence; the guns come out, several guns that he [Sheeran] throws away, but there isn't much violence. Bang, bang and they fall, there's not much blood, there’s no scandal, all the murders are quick.

[Scorsese] Proved that he wasn’t trying to make a mobster movie because of the violence, as they love it here [in Mexico]. All those narcoseries and movies, they do love that violence is predominant, intense, bloody and that is what crowns a character. And I don’t like that.

The Irishman opened in select theaters in Mexico on November 15th. The Spanish-language version of this interview was previously published at Cinema Inferno.