Coming Soon on Criterion: THE IRISHMAN Cometh, GHOST DOG: THE WAY OF THE SAMURAI Restored 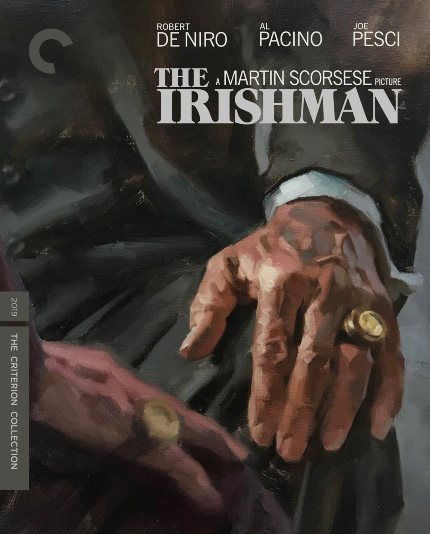 Released in September 2019, Martin Scorsese's The Irishman gained considerable publicity due to its splashy de-aging of stars Robert De Niro, Joe Pesci, and Al Pacino. Our own Christopher Bourne reviewed the film, writing that it "represents, with its somber and mournful mood, what may be Scorsese's farewell to the sort of gangster tales that largely made his reputation."

Running more than three hours, The Irishman enjoyed a healthy release in theaters before debuting on Netflix, where it played (perhaps) more comfortably at home. The Criterion Collection will offer an upgrade from the streaming experience in November 2020, when a director-approved special edition will feature a new 4K digital master, with a Dolby Atmos soundtrack, a newly-edited roundtable conversation with the director and the leading actors, a new making-of documentary, and a new video essay by film critic Farran Smith Nehme, as well as archival interviews and a program on the digital de-aging process.

Jim Jarmusch's Ghost Dog: The Way of the Samurai (1999) may not have received as much love as it deserved in that very busy year for sterling cinema, so a new, restored 4K digital transfer may be just the ticket for a new evaluation. The director-approved special edition features an alternate isolated stereo music track, new interviews, a new Q&A with the director, and more.

When I caught up with Claudia Weill's Girlfriends (1978) via the late, great streaming service FilmStruck in November 2018, I described it thusly: "Fresh, vibrant and still all too rare (the story and its focus). I fell for Melanie Mayron all over again; her character is so, so strong and resilient, it's a marvel." The film was released on DVD by Warner Archive in 2010; The Criterion Collection will release a Blu-ray featuring a new, restored 4K digital transfer with an uncompressed monaural soundtrack, along with new interviews with the director, the screenwriter, and the leading actors, including Mayron, as well as short films by Weill, essays and the trailer.

I saw Cher in Brooklyn early one morning in the 1980s while she was shooting some TV show or movie. Eventually, I realized that it was Norman Jewison's Moonstruck, which also starred Nicolas Cage, Vincent Gardenia, and Olympia Dukakis, who won an Academy Award for her supporting performance. (So did Cher, for her lead performance. So did John Patrick Shanley, for his original screenplay.) Criterion's upcoming Blu-ray will feature a new 4K digital restoration, new interviews with Shanley and also scholar Stefano Albertini, along with special features from past home video releases.

Criterion will also be releasing The Essential Fellini, featuring new 4K restorations of 11 theatrical features by the master director, and so much more, all on 15 Blu-rays.

Do you feel this content is inappropriate or infringes upon your rights? Click here to report it, or see our DMCA policy.
Blu-rayClaudia WeillCriterionFederico FelliniJim JarmuschMartin Scorsese