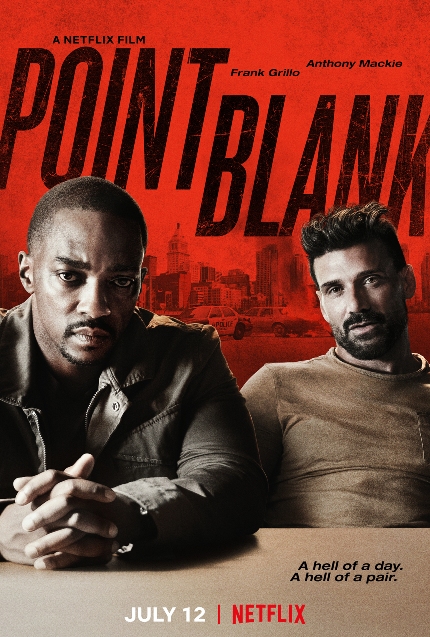 The opening sequence is so good that I refuse to divulge its contents.

This might be ridiculous to say about an English-language adaptation of a French-language original film, but the less I say about the plot of Joe Lynch's stand-out thriller, the better.

Breathlessly paced like a runaway freight train on speed, Point Blank is the most entertaining film I've seen this year. Frank Grillo and Anthony Mackie star; one is a fugitive from the law with an outlaw brother, the other a nurse with a pregnant wife. Marcia Gay Harden also stars, ferociously, as a police detective in relentless pursuit of the fugitive, who stands accused of the murder of an Assistant District Attorney in Cincinnati, Ohio.

Someone gets shot, someone provides medical treatment, someone is blackmailed, someone is kidnapped, someone is corrupt, someone shoots other people, someone is justified in their actions, someone is terrified, someone goes on the run again and again. Galloping through necessary plot points that never seem obligatory or inserted just to allow for breathing space, Point Blank always keeps moving, always makes sense, and is always entertaining. Adam G. Wilson's script is intelligent in its adaptations from the original film.

Point for parents, adult guardians, and sensitive adults: this is a bloody film that is filled with profanities, crimes, and violence, so exercise caution before allowing your infants to watch. Everyone else: be advised that the film is based on Fred Cavayé's A bout portant, a top-notch thriller that was so good our writers reviewed it four times.

What may have elevated Joe Lynch's new adaptation for me is that the filmmaker keeps on upping his game, especially with his two, immediately previous features Everly and Mayhem. He knows how to frame and shoot action and has a great sense of space and time, which blends magnificently here, to my immense satisfaction.

The cast pushes it to the top; Grillo and Mackie do what they do, to great effect, while Harden clearly relishes the opportunity to perform her authority figure with gusto. I was also glad to see the great Boris McGiver in a significant role; whenever I see him, I take great comfort in his confidence (and, yes, that dates back to The Wire).

Put it all together, and an instant classic pops up.

Do you feel this content is inappropriate or infringes upon your rights? Click here to report it, or see our DMCA policy.
Anthony MackieFrank GrilloJoe LynchMarcia Gay HardenNetflix