Review: EVERLY Fails Its Heroine, Story, And The Audience 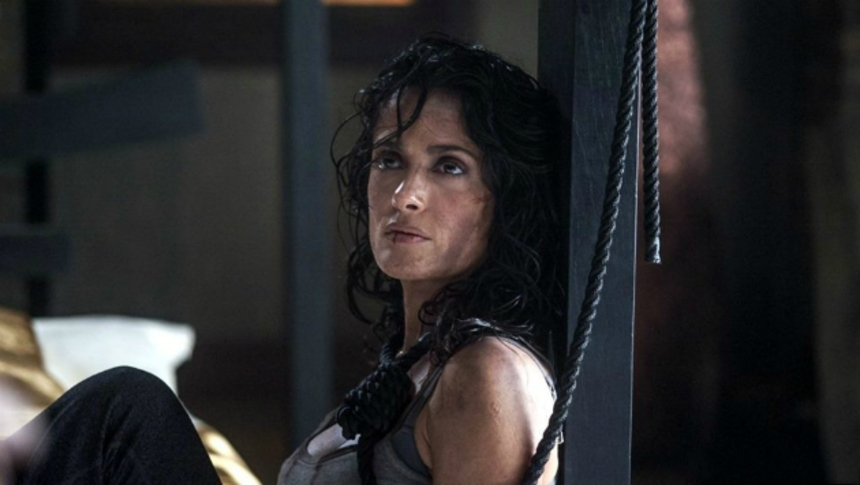 Both take place at Christmas (a seasonal assault in its own right), but instead of resourceful Officer John McClane fighting off a swarm of bad guys holding his wife hostage at the Nakatomi Plaza, we have hostage-as-heroine Everly (Salma Hayek) trapped and under siege in an apartment she can't leave, attempting to clandestinely shuttle cash to her mother and the daughter she abandoned before the bounty on her head is claimed.

Everly has been held hostage for four years by the Yakuza, who just found out she has been working with the police. Realizing that her mortal time is limited, Everly's latent Mama Bear leanings manifest, and manifest hard: Determined to secure a stable future for her family in what little time she has left, she will stop at nothing (and no one) to make sure they get the money.

Between the interesting premise, the wealth of ably well-orchestrated gunfight sequences, occasional flourishes of stylish humour and Hayek's own undeniable presence as an action star with acting chops, Everly deserves - and ought - to work better. Instead, the film manages to fail its heroine, story and the audience in its critical, establishing scene, which introduces Everly as a brutally beaten, desperate, Yakuza-owned sex slave-slash-prostitute.

Who has just been gang-raped.

At the film's post-premiere Q&A at Fantastic Fest, director Joe Lynch seemed to earnestly, genuinely assert that any notion of Everly being "gimmicky" by virtue of the mere inclusion of a female protagonist was misplaced, and instead posited the film as "a date movie for women to bring their boyfriends to."

Everly's opening scene is purposefully pivotal, the spark to the gasoline that drives every aspect of this character's journey. Hayek convincingly holds her own here, naked and through tears in a sequence that is well-meaning but ultimately cowardly. There's no blood, no bruising, no mess.

Overlooking the ugly aftermath of rape in favour of something more visually palatable is the cinematic equivalent of blue dye in a maxi-pad commercial. Weirdly, Everly is not afraid to include a myriad of beautiful, bloody shots of violence except for when it comes to the messy aftermath of its central character's violent gang rape. It's 2014, and if the rape-as-device gauntlet is going to be thrown, it's definitely problematic (did I mention gimmicky?) to see it being thrown half-heartedly. A lot of effort has been put into creating a world that supports the environment we need to believe Everly is set, but choosing to include certain aspects while nimbly excluding others makes that impossible. As a result, everything that follows is inherently tainted.

Though Hayek easily re-asserts herself as a formidable action presence, it is frustrating that her character isn't allowed (or pushed) into greater or more revelatory depths given her brutal introduction. An interesting premise holds some promise for this character to really blossom as a cool, likable or even memorable heroine, but she's never really given the opportunity since there's not a lot of substance or back story there to begin with.

Despite being totally capable at lobbing a grenade or wielding a gun, Everly exudes little in the way of personality or charm and is robbed of a fitting "Yippee ki-yay" moment or an opportunity to "wiggle her big toe." It's a shame that when she utters lines like, "I'm not your bitch!" you can't help but think, "Well, actually... you kind of are."

Review originally published during Fantastic Fest in September 2014. The film is now available to watch via various VOD platforms, and opens in select U.S. theaters on Friday, February 27.