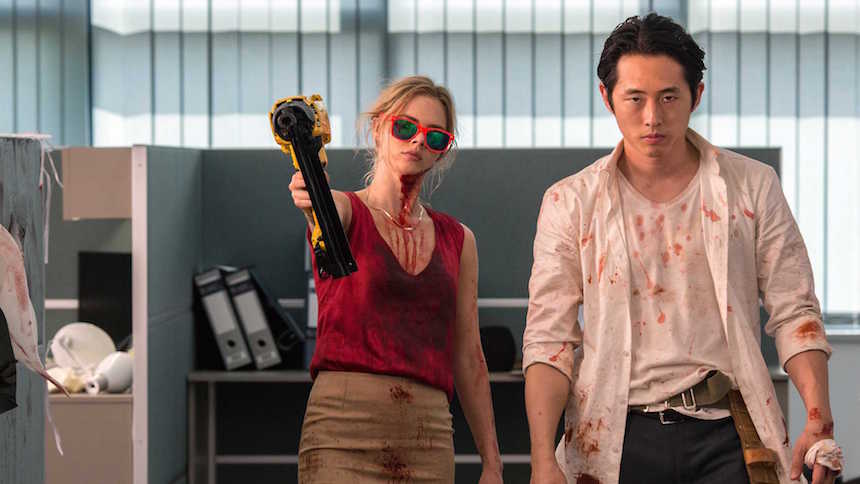 In Mayhem, now available on Blu-ray and DVD, Steven Yeun is Derek Cho, a character that many people will easily relate to. Derek was a good-hearted layer until he started working for a big corporate firm; after a few months there, he has become - in his own words - a “dick”, clearly unhappy with his lifestyle but at the same time doing the necessary to climb the corporate ladder. This is certainly a familiar situation for countless persons and, when initially reading Matias Caruso's script, director Joe Lynch was one of those who could see his own life reflected in the protagonist.

In an interview with ScreenAnarchy, Lynch revealed that he "actually read the script while I was in a corporate workspace. I was doing the 9 to 5, trying to pay the bills, but really not feeling creatively satisfied in that respect. This script came along and it touched me on a personal level, because it was exactly what I was going through: the same struggles, dissolution and depression. There are plenty of people out there who like and need that corporate structure, but I’m more of a creative person who likes to wear jeans and black t-shirts to work. I knew the character and the situation, and that was the first time I felt that compelled to make something that had so much resonance in my own life.”

Mayhem is also a genre movie that establishes its crazy context since the very first sequence. There’s a virus that basically turns its victims into red-eyed savages that won’t hesitate to do such things as fucking in public, punching someone they don’t particularly like, and even going as far as killing an enemy. "Genre, horror and sci-fi are amazing mirrors that allow us to exaggerate the consequences of the current state of affairs. These type of stories automatically allow us to put ourselves in a what if situation: what if this happens in real life? What would we do?" 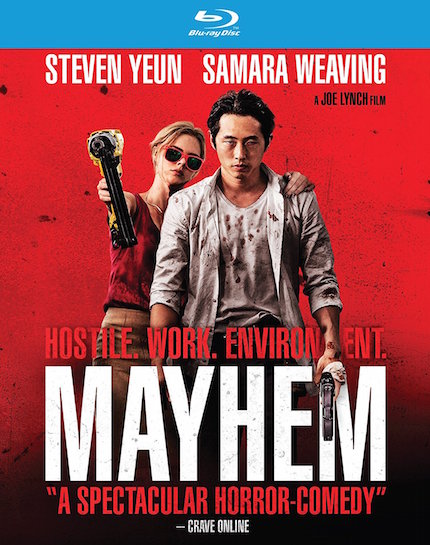 The “what if” scenario of Mayhem wonders what would happen if Derek and all of his co-workers are placed in a 8-hour quarantine inside the firm’s building, due to the so-called red eye virus; more so, how would a red-eyed Derek react after getting unfairly fired by his hateful, cocaine-addicted boss? In Mayhem things get quite bloody, indeed, but in the end, the social commentary is always there.

“Right now everything is becoming a subsidiary of a bigger company. Hell, our president [Donald Trump] is a big boss, and it all seems more like Evil Corp from Mr. Robot or OCP from RoboCop. What’s great about that, in a selfish way, is that more people will relate to Mayhem at least a little bit.

"More times than not, after the screening is over, people come up to me and say that they completely know what this character went through, get the message, and that they are going to quit their jobs. I’m like, yeah, that’s great, but maybe you should make sure that you can pay the bills and that your kids are fed! Corporate life is not for everybody and if it isn’t for you, then you should do what you need to do to; maybe find another job or, if you're stuck and there’s nothing you can do, find an outlet, something artistic, an expression that you can challenge your energy in, and use that instead of just being depressed or angry", concluded Lynch.

Do you feel this content is inappropriate or infringes upon your rights? Click here to report it, or see our DMCA policy.
interviewjoe lynchmatias carusomayhemSteven Yeun