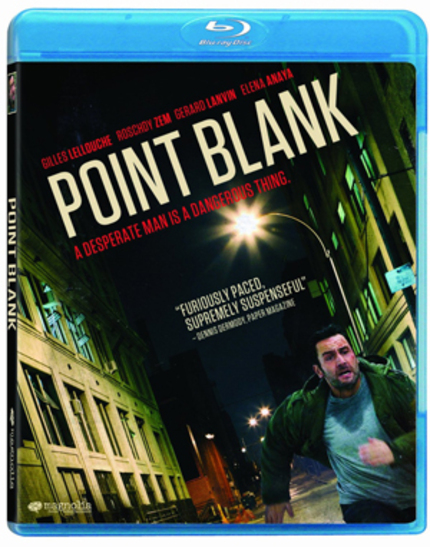 Point Blank (A bout portant) blew me away! I really had very few expectations going in, all I knew was that our Scott Weinberg had given the film a positive review, but I didn't read it because I wanted to experience the movie fresh.  Let me tell you, I don't think that any amount of preconception could have dampened my enjoyment of this movie.  An extremely tightly scripted and shot thriller, Point Blank is the kind of film that leaves you breathless right through the final frames.  Magnolia's Blu-ray of this film is exceptional, with an eye-grabbing image and incredibly enveloping sound mix, the film draws you in and keeps you glued to the TV for 84 mind-blowing minutes.

Samuel is a nurse working at a hospital when his pregnant wife is kidnapped before his very eyes. Knocked unconscious, he comes to and discovers that a dangerous criminal named Sartet is responsible, and if he's ever to see his wife again, he must do Sartet's bidding. Samuel quickly finds himself pitted against rival gangsters and trigger-happy police in a deadly race to save the lives of his wife and unborn child.

You'd better take a deep breath before starting Point Bank, because it's the last one you'll get for the next hour and a half. The film starts with a chase, continues with a chase, finishes up with a chase, and ends with a smile. All that chasing will leave you panting in your seat, but there is something else behind it, a genuine tension and real narrative thrust that this kind of action film generally doesn't offer. The closest film equivalent I can think of is Leon, which is high praise in my book. Only, if anything, Point Blank dispatches with some of the sentimentality of Leon in favor of pure adrenaline.

We hitch our emotional wagons to a 30-something nurse's aide, Samuel, in a hospital with a pregnant and beautiful wife.  He mistakenly gets caught up in some criminal intrigue when he saves a career thief from gang assassination in his hospital. As a result, his wife is kidnapped by the bad guys and he's ordered to get the victim out of the hospital or his wife dies.  This all happens in about the first fifteen minutes of the movie.

There is no greater inborn emotional attachment than that of a parent to their infant, or unborn, child, and that attachment is shared among the father, the mother, and in this case, the audience, who is just as much a part of the chase as Samuel.  Thanks to some brilliantly vigorous camera work (yes some shaky-cam), we are in the middle of this chase with Samuel and the criminal he's been tasked with busting out of the hospital, Sartet.  Perhaps predictably, not everything is as it seems, and in the few brief moments that the pair takes to catch their breath, an entire story about bribery, crooked cops, and a security camera video all come into play, raising the stakes for Samuel and his wife and unborn child.

Point Blank is incredible, there is tension on screen that is hard to capture, and the kind of action that really keeps the audience at the edge of their seats. What director Fred Cavaye and star Gilles Lalouche have managed with Point Blank is worthy of your time. This may be a late addition to my 2011 top ten list.

Magnolia have knocked it out of the park with their A/V presentation of Point Blank.  The image is crystal clear with lots of fine detail and visible grain in appropriate spots. In addition, the colors, and precise cinematography look wonderful.  The DTS-HD MA 5.1 track is also brilliantly mixed and wonderfully immersive.  A bang up job by all.  I can't speak to the English dub, but I'm sure it's as unnecessary as they all are.

As far as extras are concerned, Magnolia have provided the theatrical trailer and a behind the scenes featurette.  This making of featurette is actually very good, it takes advantage of tension on the set to explain how a film can be a collaborative process and that process isn't always all smiles.  The actors are worn out from running, the DP is getting yelled at for taking too long to set up, and the director is fussy, but it all comes together in a wonderful way.  Despite being slightly EPK-ish in its set up, this 50 minute behind the scenes look it well worth watching.