Notes on Streaming: A HOME WITH A VIEW Embraces Hong Kong, THE WANDERING EARTH Arrives From China 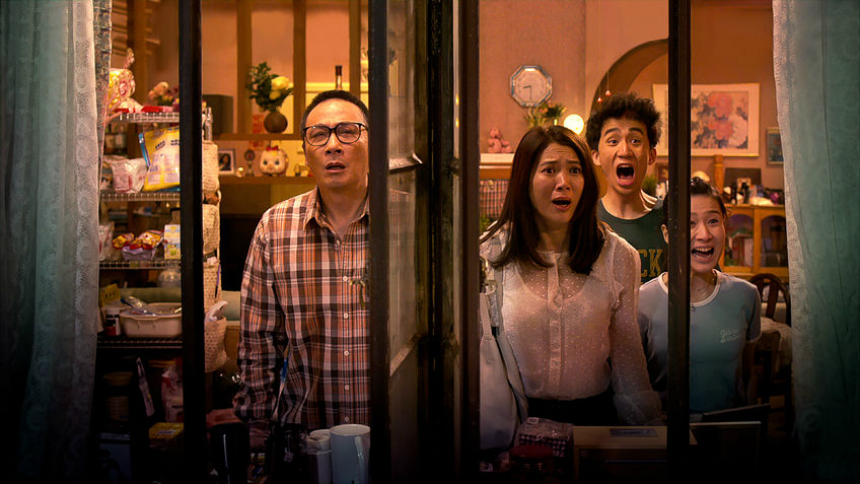 We continue our focus on Netflix with a trio of titles from Asia that have recently arrived on the streaming service.

A Home with A View
Now streaming on Netflix.

The English-language title might call to mind James Ivory's elegant screen version of E.M. Forster's A Room with a View (1985).

Here "the view" refers principally to the view that an economically-struggling family enjoys from their mid-rise Hong Kong flat: they can see the sea! And then their mysterious new neighbor across the street puts up an outrageously large billboard, blocking their view and practically incited a riot.

Primarily this is a family comedy, directed by the reliable Herman Yau and adapted by Tat-Ming Cheung from his own stage play. Francis Ng and Anita Yuen Wing Yi play the long-suffering parents, Louis Koo plays the mysterious neighbor, Lam Suet is a noisy neighbor, and the pleasures abound. As to be expected, the comedy dominates the first act, while the second starts to get more serious before taking a few delightfully unexpected turns in the third act.

Summing up: A messy, uneven, yet extremely enjoyable comedy that makes me nostalgic for the golden era of Hong Kong films.

Our own Josh Hurtado described it as a rousing space adventure in his review, concluding: "The Wandering Earth is one of the most successful science fiction films of the last decade in that regard, it has no shame in which heartstrings it pulls, and it plays its audience like a fiddle. Thankfully for us, it's a beautiful song that I could listen to a million times over."

Summing up: Of course, it would have been better to see it on a big screen, but I enjoyed the eye candy, even on my television, and found the Chinese approach -- big on melodramatic noble sacrifices for the greater good -- to be refreshing. It's a 'gotta see' for genre fans, just to know for yourself what everyone has been talking about.

Lest anyone think that mixing genres is restricted to Hong Kong, a new series from South Korea mixes a deadly-serious murder mystery with a more lighthearted comedy. Oh, and resurrected dead people.

We meet prosecutor Go Se-yeon (Park Bo-young) and her lovelorn friend Cha Min (Ahn Hyo-seop) when they are played by strikingly different-looking actors ... and are still alive. By the conclusion of the episode, both have died and been brought to life in strikingly different bodies. Now the less-attractive man is tall and good-looking, and the tall and more-attractive woman is short and more plain-looking. They team up to solve their own murders, which may involve an inactive serial killer who has returned to his murderous activities.

This is made possible by a mysterious, occasionally glowing marble, which "revives the dead into the form of its soul," according to the English-language subtitles. The first two episodes are now available to watch; I found the principal characters engaging and the mystery mildly compelling, though I suspect I am mostly missing the social criticism about beauty and outward appearances that may be intended for Korean audiences.

Summing up: Granted, I have next to no knowledge about Korean drama series, so I'm unable to place Abyss into its proper critical context; is it about average? Above or below what's to be expected? In any event, I've added it to "my list" on Netflix and anticipate watching the next episode, which will debut on Monday, May 13. Future episodes -- 16 in all -- will be dropping weekly on Monday, which seems about right, as the U.S. broadcast season draws to a close.

More about The Wandering Earth