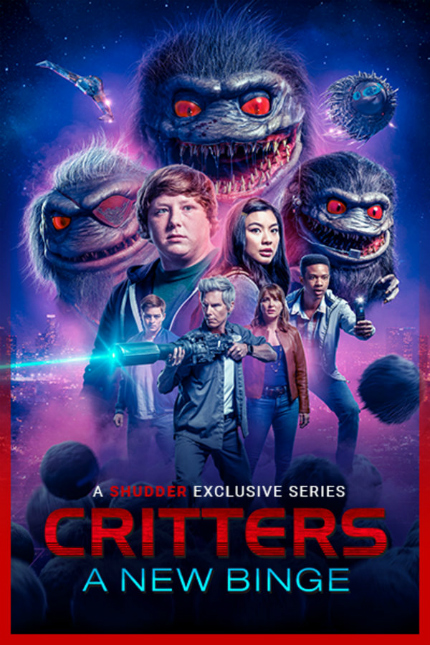 What's new this weekend: Oddities from the U.S. and Asia.

Although I enjoyed Stephen Herek's original film in 1986, I missed out on the three sequels, so I was mighty curious to see what a reboot might be like. Exclusively available on Shudder, the series consists of eight episodes, running 8-11 minutes each.

Like the first film, the two episodes I've seen are silly and crude and entirely disposable, which makes them perfect appetizers for an evening of genre viewing. Per the official synopsis, "Pursued by intergalactic bounty hunters, the Critters return to Earth on a secret mission and encounter Christopher, a lovelorn high-schooler, his best friend Charlie, his crush Dana, and his mom Veronica - whose past will come back to bite them. Who will survive? And who will be eaten?"

Summing up: Light and deliciously chewy.

"For a dead person, you're looking very healthy."

The Taiwanese series is blocked in mainland China, per THR, but it's available elsewhere around the world on Netflix. I've sampled the first of six episodes, which begins with the rather arid introduction of a struggling psychologist who was educated and has now returned to Taiwan to start his practice. His bluff, impolite manner has driven away practically every patient that's been referred to him by his well-connected girlfriend, so she challenges him to find his own clients.

Before you can say Gender Identity Disorder, the psychologist stumbles upon a low-level, would-be gangster who was killed by his criminal associates; somehow, the spirit of the gangster has transferred to a very confused woman. Their first session is ridiculous and funny, and then the episodes retreats to a more dramatic treatment of the premise.

Judging by the trailer and the short official synopsis, it appears that the psychologist will take on more ghosts as clients, though I imagine that collection of bills will become an issue for him.

Summing up: From the first episode alone, the tone appears to be all over the place, but there's enough promise in the premise to explore it further.

"My husband's penis won't fit," is what she wants to say, but she can't imagine anyone she can tell about the little ... challenge she faces.

An (apparently) dramatic series has instead been produced. The ten episodes range in length from 28 to 47 minutes; I made it through about six minutes of the first episode (which I'm told is about average) before moving on in search of something more genre-friendly. From the title, I thought that perhaps the show would quickly reveal itself to be a wacky comedy, but no.

Instead, we follow Kumiko, who is from a rural area in Japan, as she moves to attend college and quickly meets fellow education major Kenichi. Once they begin dating, "they discover a problem" and the series goes on from there.

Summing up: Er, not for me. I shouldn't dismiss a show so quickly, I know. But I felt compelled to share my admiration for the title!

Do you feel this content is inappropriate or infringes upon your rights? Click here to report it, or see our DMCA policy.
CrittersGreen DoorJapanMy Husband Won't FitNetflixShudderTaiwan