Notes on Streaming: BLAME! and GODZILLA: CITY ON THE EDGE OF BATTLE Each Blaze Their Own Desperate Trail 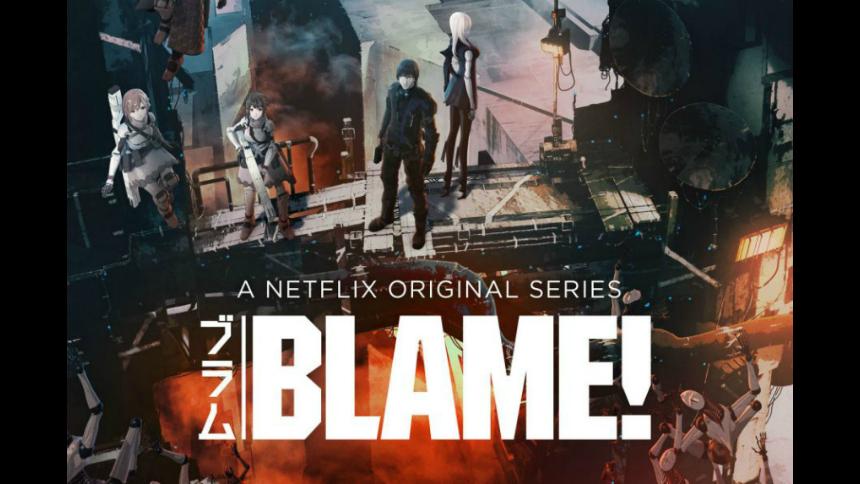 In my last column, I offered up my two-pronged solution to the frequent complaint about Netflix that their flood of new series all have too many episodes that are all too long, suggesting that viewers either try another streaming service or watch shorter shows with fewer episodes.

Having written that, I decided to follow my own advice and watched Godzilla: City on the Edge of Battle, released in Japanese theaters on May 18, 2018, and then on Netflix globally on July 18, followed by Blame!, a very likable series that was actually released globally by Netflix last year.

And I've just started watching Banana Fish, an anime series that is now airing on Fuji TV's Noitamina programming block in Japan on a normal broadcast schedule -- one episode weekly -- and is also available to watch on the Amazon Prime Video service internationally. Through four episodes, the 24-episode series looks very promising; more on that, perhaps, in another column.

Let's start with Blame!, which somehow escaped my notice last year. Perhaps that's because it's a fairly mild show, as far as violent or outrageous content is concerned. Yet that's also what attracted me to it; lately I have been preferring to watch screen entertainment that doesn't scream -- or spill copious amounts of blood, etc. -- to gain attention.

Blame! begins with a sequence that includes nasty things befalling a group of young people. Rather than an irresponsible bunch of teens reaping a foolish desire to have a little fun in dangerous circumstances, however, it's quickly revealed that they bravely took it upon themselves to try and find food for their trapped and beleagured community.

The tiny village is all that remains in the ruins of a city that has been destroyed by its own Safeguard, an automated system that keeps building and expanding the sprawling city structure, but also relentlessly hunts down anything within the city limits that it identifies as an "infection," such as, oh, all human beings.

The teens, led by the intrepid and seemingly fearless Zuru (voiced by Amamiya Sora), are saved at the last minute by Killy (voiced by Sakurai Takahiro), who acts like a masterless samurai in search of a human with a rare gene that can overthrow the Safeguard. Killy's endless, dedicated search for a cure will take him away from the village, but the local leaders ask that some of their group accompany Killy to possibly secure food for their starving residents. Thus, Killy, Zuru and friends set off on a trek filled with danger, offering no guarantees for the future.

Scripted by Murai Sadayuki, based on the manga series written and illustrated by Nihei Tsutomu, and directed by Seshita Hiroyuki, Blame! is a drama rather than a thriler. Though it's filled with dynamic action sequences, a gloomy atmosphere holds sway over the proceedings.

It's not quite as doom-laden as a typical noir mystery, but we are very much aware that the trekkers, as well as the village they are seeking to preserve, are walking on very thin glass. Not everyone will survive. The film avoids becoming overly pessimistic, however, which raises the possibility of success, and the story's momentum never flags for too long. Blame! is an easy recommendation, especially for animated film fans who are looking for something a bit darker.

Find the series on Netflix. 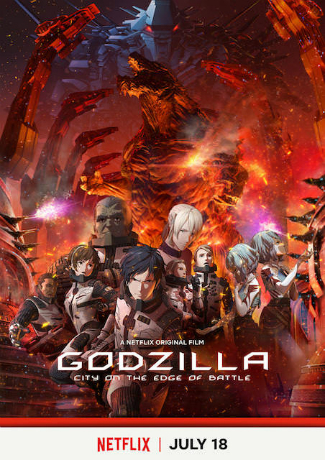 Earlier this year, I wrote about the animated film Godzilla: Planet of the Monsters, noting that I expected it to be a dead-serious affair with a new take on Godzilla. Instead, after an intriguing setup, the remainder of the film was fairly straightforward military anime, good for what it was but not exactly something I was eager to revisit.

Imagine my surprise, then, that the second part of the planned trilogy, Godzilla: City on the Edge of Battle, is more engaging and thoughtful, while featuring military battles that are more varied and focused. Set entirely on Earth, centuries after Godzilla rose up, conquered the planet, and chased the remaining humans into space, the film follows Sakaki Haruo (voiced by Miyano Mamoru) as he becomes ever more determined to destroy Godzilla.

First, though, he is introduced to an indigenous tribe known as Houtua; two members of the tribe serve as guides for him and his military team, or what's left of it. A fair swath of time is spent discussing strategy and preparing to war on Godzilla. But the landscapes this time are different than in the first film, and the non-action scenes feel more lively and charged. And the action scenes themselves are different from the first film in their weaponry and approach.

Even though we know this is the second of three parts of the story, new questions are raised and the varied overall approach made me keen to see the conclusion of the tale, which is heading for release in Japanese theaters in November 2018.

Both the first and second films are available to stream on Netflix.

More about Godzilla: Planet of the Monsters